There was a nice gotcha moment from 3AW’s talkback tzar Neil Mitchell this morning, when he exposed premier Ted Baillieu for apparently ripping off his predecessor’s lines. Plus, other media news of the day.

No-spin Ted borrows Brumby spin. There was a nice gotcha moment from 3AW’s talkback tzar Neil Mitchell this morning, when he exposed premier Ted Baillieu for apparently ripping off his predecessor’s lines. It seems Big Ted was so enamoured with John Brumby’s work his media team decided to use the same lines trotted out by the Labor premier last year to sell a $55 million MCG redevelopment. There were many striking similarities, including these two beauties. Exhibit A:

“The MCG is Australia’s greatest sports venue and a Victorian icon, and it has been recognised as one of the best sporting stadiums in the world,” Mr Baillieu said.

“The MCG is Australia’s greatest sports venue, one of our proudest icons, and it has been recognised as one of the best sporting stadiums in the world,” Mr Brumby said.

Media adviser Simon Troeth’s name is at the bottom of the release. He might have a few questions to answer this afternoon, especially after his boss promised there would be “no hidden agenda, no spin, no secrecy” under a Liberal regime.

Morning glory on Sunrise. It’s not just Facebook you have to watch out for. It’s the penis that might appear behind you (via: @danielstone) … 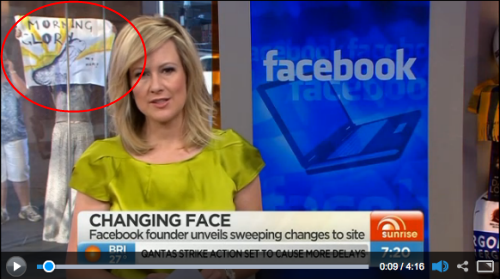 Front page of the day. With the world’s financial markets in turmoil overnight, the UK’s Daily Mail front page doesn’t fill one with a sense of optimism … 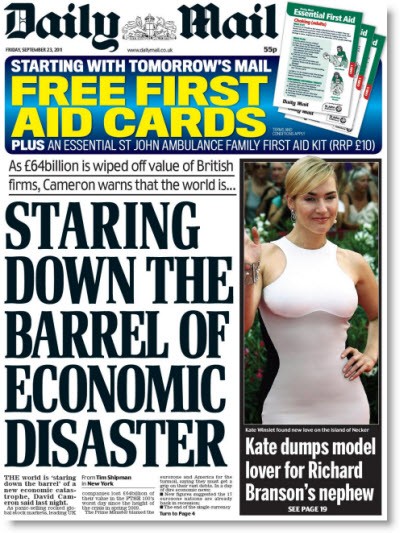 “A YouGov survey carried out in November 2010 found that 54 per cent of the 2012 Britons questioned said they trusted broadsheet journalists and seven per cent said they trusted tabloid journalists. According to the University of Nottingham, which asked YouGov to repeat the survey in July this year — the trust figure for broadsheets had dropped to 41 per cent and to 5 per cent for tabloids.” — The Wire

What newsrooms can do now to start preparing for 2012 election

“Most news organisations should focus on the local opportunities first, last and always. With that mantra in mind, and a general election almost a year away, here are some tips for how newsrooms can prepare for great online coverage.” — Poynter

“The BBC, along with Sky and ITN, has handed over untransmitted footage of the riots which took place in August after police took out a court order against them, according to the broadcaster.” — journalism.co.uk