A Supreme Court encounter is brewing between high-flying federal Liberal front-bencher Sophie Mirabella and the children of her close friend, deceased distinguished law professor Colin Howard QC, over the proceeds of Howard’s estate.

Mirabella, 42, was a keen student of Howard’s in the late 1980s at Melbourne University, with the duo teaming up as co-anti-republic delegates to the 1998 constitutional convention. Prof Howard was an esteemed legal statesman and constitutional expert who served as an adviser to the Whitlam government during The Dismissal. He died on September 2 after a long battle with Alzheimer’s disease. He was 83.

Crikey understands Mirabella had a long and close friendship with Prof Howard over many years after the student and her professor met at Melbourne University, and was granted power of attorney by Howard several years ago. Two weeks ago, Mirabella and current husband Greg placed the following death notice in Melbourne’s Age newspaper. 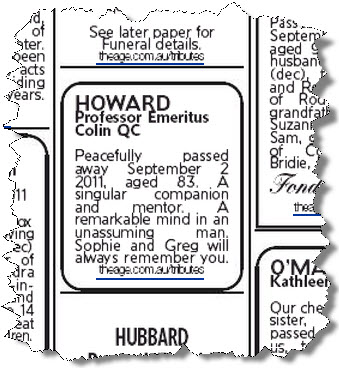 But Prof Howard’s two children — successful London fund manager Mervyn Howard and the Australian-based Lesley Howard — are preparing to contest Mirabella’s execution of the will to ensure the correct beneficiaries are adequately provided for.

The children have engaged David Leggatt of top law firm DLA Piper to oversee their claim. He is expected to argue that Howard was unfit to grant Mirabella power of attorney due to the nature of his debilitating illness. Veteran Melbourne spin doctor and State Library of Victoria board member Steve Kerr has also been engaged by the Howards to represent them in the dispute.

Crikey understands that a Supreme Court application by the children relating to the estate is imminent. However, this would require Mirabella to apply for a grant to validate the will under Victorian law, a move which may attract negative publicity.

Mervyn Howard is a trained lawyer and director of prominent London fund manager Grosvenor. It is understood he recently travelled to Australia for his father’s memorial service and to oversee the pending legal action.

Sophie Mirabella’s office said the matter was private when contacted by Crikey late last week: “This is a private matter and an upsetting time. We buried Colin less than a week ago. No application has yet been made to obtain grant of probate of his will.”

In her maiden speech to parliament in 2002, Mirabella named Professor Howard as part of a trio of elder gentlemen who had inspired her with their “intellectual ability and integrity”. “As a relatively young Australian”, said she was “grateful for the hope they had given me.”

The pair had previously served together as elected delegates to the 1998 constitutional convention as part of the group Australians for a Constitutional Monarchy. Mirabella quoted Howard’s view of constitutional law approvingly in this fiery 1999 PM interview.

In 1995, at the fifth conference of the conservative Samuel Griffith Society at Sydney’s Menzies Hotel, Howard spoke glowingly of his former student, describing the then Sophie Panopoulos’s observations on the effect of a constitutional amendment on the Commonwealth’s external affairs powers as “absolutely spot-on“.

In 2006, Panopoulos married former Lieutenant-Colonel Greg Mirabella, with whom she has two young children. She has been the federal member for the Victorian rural seat of Indi since 2001 and has since risen to become Tony Abbott’s shadow minister for industry, innovation and science. Mirabella has a reputation as a terrier-like parliamentary performer, retaining from her university days a special interest in the voluntary student unionism debate.

The respected Howard had a long and storied career as a fearless dispenser of legal advice on the issues of the day. He was general counsel to Commonwealth Attorney General Lionel Murphy until Murphy was appointed as a High Court judge in February 1975.

Professor Howard penned a famous Age op-ed on the day after The Dismissal on November 12, 1975 under the headline ‘Power, without any glory at all’.

“Australia has always had a powerful, if vaguely defined, belief that it was one of the most democratic countries in the world. There is sadness as well as irony in the fact that we were so convinced of our natural superiority in this respect that we needed the Queen’s representative to show us how wrong we were,” Howard wrote.

He had moved to Australia in 1958 from the United Kingdom to take a job lecturing law at the University of Queensland. He served as Hearn Professor of Law at The University of Melbourne for 25 years between 1965 and 1990, took silk in 1996 and retired from practice in 2001.

Crikey understands that savvy Sunday Age scribe Michael Bachelard is preparing to write a story on the saga this week, with editor Gay Alcorn keen to splash with the feud on her paper’s front page.

[She has a reputation as a terrier-like parliamentary performer]
Perhaps the most “generous” description of “La Mirrabella” I’ve ever read.
Well done Andrew. 🙂

I’m looking for the public interest angle here. After all this breathless piece is your lead story. Has anyone done anything wrong? This is the sort of story a publication like, say, News of the World might publish.

You haven’t hacked anyone’s phone, have you? Gone through anyone’s rubbish bags by any chance? Got someone lurking behind a bush to snap a candid picture of Ms Mirabella as she leaves home, perhaps?

Well, it’s all out there for Sophie’s family and the rest of us now: http://www.theage.com.au/national/power-love-and-money-20110922-1knb7.html

I particularly like this quote:
”As she (Sophie) said to me the other day, if she wins this election, she is made for life,” Colin wrote to his son Mervyn in 2000.

Wangaratta was originally settled by gold diggers and was later plagued by bushrangers. Not that anything related to that is in any way relevant to this story – just a bit of historical background about Wang.

David hand you are right, the actual public interest in this story is slight. Though Pia Akerman at The Australian seems to feel it worth reporting, too.