Wayne "World's Greatest Treasurer" Swan was humble and unusually charitable on The 7PM Project last night when he quipped he'd be happy to lend his shiny new award to Peter Costello "for a little while".

Wayne “World’s Greatest Treasurer” Swan was humble and unusually charitable on The 7PM Project last night when he quipped he’d be happy to lend his shiny new award to Peter Costello “for a little while”.

Which is more than you can say for Joe Hockey … 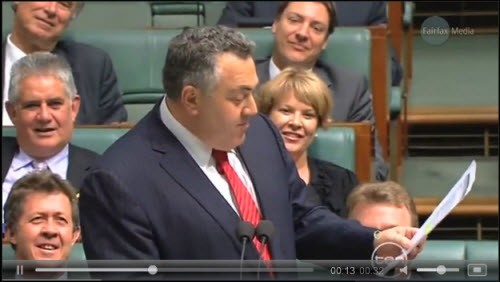 Check out the company Swan keeps among the winners, Joe retorted: “Slovakian ministers, a Serbian, a Nigerian and a Bulgarian. In 2001 there was a Pakistani finance minister. That is quite an extraordinary one, that one.”

“What’s extraordinary about Shaukat Aziz — later prime minister — getting an award went unexplained, particularly as Aziz was lauded for a consolidation of Pakistan’s previously shambolic public finances, something the IMF singled him out for praise over. Perhaps, you know — Pakistan is inherently funny? As for ‘a Nigerian’, well, that was only Ngozi Okonjo-Iweala, who became managing director of the World Bank for four years between stints as Nigerian finance minister and foreign minister. Still, Nigerians, eh?”

Joe is still smarting over losing all that money to a Nigerian emailer he generously helped out once.

It was a decidedly racist attack wasn’t it?

Joe Hockey you are one offensive grub of a man.

Let’s take a look at the Pakistani Finance Minister who got the award. He was ill-deserving, if we are to accept the Hockey sneer.

Shaukat Aziz was also Pakistan’s 15th PM. That aside, let’s take a look at his CV, listing the things Hockey would normally be interested in, under the stewardship of Aziz:

This in a country with a military government facing active insurgency.

Hockey needs to up his game in government, should he get the chance, if he wants to avoid being outperformed by someone he sneered at.

Why don’t people understand. The Lieberals & Irrationals Coalition are essentially a bunch of “born to rule” upper class (or upper class aspirant) tweets. They have never and can never accept that another party wins government. When Rudd won in a landslide, Turnbull thought he found a way to force the government to resign (the Gretch/Utegate affair). He was not willing to wait for the next election he thought he had found a way to defeat the government as did Fraser in 1975. When that backfired they put in the nasty attack dog Abbot. His mission, to denigrate the government with as many LIES as possible, complete disrespect for the office of the PM, and worse of all the fanning of dumb anger from gullible people who think they are “right” because they drive a “BIG” truck.

The “right” have always tended to violent actions when they disagree with the government of the day. This is how the “right” generally gains power and they can always call on their mates “the filthy rich” who are all criminals of one sort or another. Most “filthy rich” dynasties made their money through some act of violence. We could start with the Queen’s ancestors/family in 1066, they invaded England and stole all the land some of which they own to this day. The USA “filthy rich” killed millions pf indigenous people and stole their lands and then had slaves to do the hard work. Can you actually see their fellow travellers have respect and sympathy for the “wage slaves” of today?