News Limited will change its name in an attempt to cure its perception as an "arrogant newspaper company" that is "difficult to deal with". Crikey has exclusively obtained the leaked documents.

News Limited will change its name in an attempt to cure its perception as an “arrogant newspaper company” that is “difficult to deal with”.

In a secret 86-page advertising pitch brief obtained by Crikey, the Australian arm of Rupert Murdoch’s global empire — to be rebranded “News Australia” — reveals its plans for a local resurrection under the code name “Project Darwin”.

Crikey understands the PowerPoint presentation by News marketing director Michael Nearhos, dated September 15, was sent to several people in at least three advertising agencies. It states News’ public image needs rehabilitation because its “culture and values” have never been properly aired. The News Limited brand was “largely invisible” to consumers and customers.

News Australia will publicly launch the new name in February, with artwork required by November 28. A mock-up is presented for “illustrative purposes”.

The wide-ranging treasure trove also reveals News will launch an “Australian digital pass” across all its mastheads beginning in November when The Australian and portions of the tabloids start to be locked down. One log-in would provide access to all of News’ Australian sites with the possibility of an overarching paid content aggregator. Previously, the company had provided no detail on its paywall strategy. 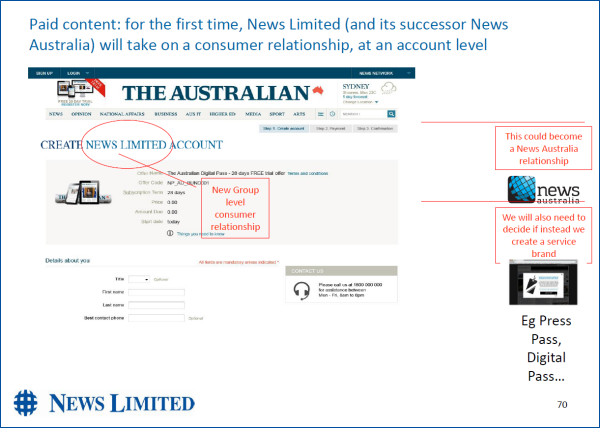 The News Australia project will be implemented by its “key spokesperson and advocate”, News CEO John Hartigan. Head spin doctor Greg Baxter will handle “comms”, with fellow executives Ed Smith and Tony Kendall also listed as linchpins. Hartigan will embark on a capital city roadshow in November to talk “strategy and change” with staff before the official public announcement.

While News Limited’s “contentious” corporate logo will be retained, Nearhos says that “we need to look at ways to refresh and contemporise this device”. He suggests creatives consider “dimensionalising” the company’s image.

The elaborate strategy comes just weeks after News announced a hiring freeze as part of a plan to cut costs by 20% over the next three years. 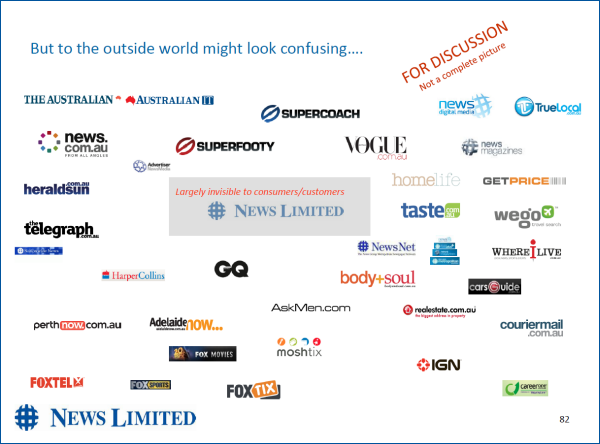 News execs were asked to position the firm within the “Pearson Archetypal system”, a branding exercise that assigns an organisation a personality “type”. While News itself doesn’t fall into a specific type, the document notes that the “Creator” (Martha Stewart, Crayola) and “Explorer” (Amelia Earhart, Starbucks) archetypes “have appeal”.

According to the implementation timeline, the vast majority of the key documents flagging the transition were created after the News of the World phone-hacking scandal went nuclear in July. At the time, Hartigan was extremely keen to distance News’ local arm from the revelations, claiming that the abhorrent practices in the UK would never be repeated here. Hartigan also announced a review of News’ editorial spending conducted by former Victorian judges Frank Vincent and Bernard Teague. 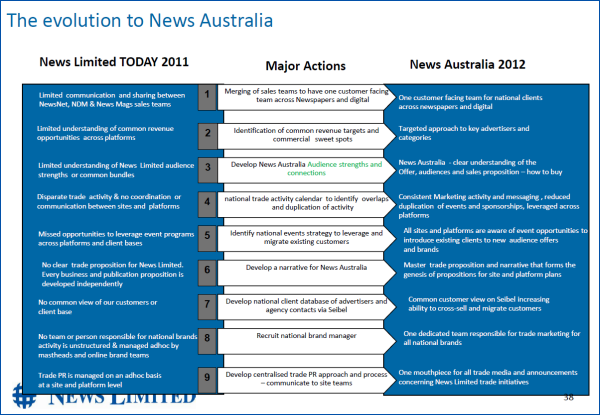 The document features the fruits of an interview with Hartigan and 11 senior executives conducted by communications experts Edelman. The executives appear concerned that News’ self-identified audience of “Middle Australia” fails to align with “prestige” trade audiences. Under a heading “We’re middle Australia”, they leave no doubt that they perceive News to be popular with the masses.

“We reflect and fight for the values of Middle Australia … as a result we can deliver this audience to our advertisers,” the executives reckon. The “community” is championed: “we advocate for the fair go and we challenge, question, and probe on behalf of the community. We actively seek to hold authority to account on behalf of the community, as we have from our earliest days.”

But the news isn’t all good for News, with the actions of some employees and divisions chafing with the company’s “espoused values”.

“Research revealed some misalignment with espoused and enacted values. It also suggested that any existing value statements were often disconnected from the company or brands and were not well communicated,” the document states.

A list of “hot topics” for implementation include accountability, standing up for consumers, accuracy, owning up to mistakes, and environmental, sustainability issues.

Internally, the News Limited sales structure is depicted as a siloed schemozzle, with “national brands activity … unstructured and managed ad-hoc by mastheads and online brand teams”. A solution is provided by the hiring of a “national brand manager”. Other media companies including Seven, Nine and Fairfax have centralised sales teams that News sadly lacks. As a result “News is seen as slow and difficult to deal with”.

News also includes a full and frank “threat assessment” of the strengths and weaknesses of its rivals. Seven is sledged for not having a national newspaper offer while one of Nine’s strengths is apparently “David Gyngell”. News says Fairfax has “instability in its exec teams” and was “slow with iPad apps”.

But its self-assessment is just as swingeing. While News is a “global media company” with “intelligence and insights”, it has “no consistent trade position” and “continue[s] to have poor implementation of big ideas”.

Several negative corporate perceptions persist — News is “still in silos”, is “arrogant and difficult to deal with” and newspapers “are the least innovative out of all the media platforms”.

The company may have “mass audiences” but there was “too much wastage in newspapers.” News, some industry players thought, was “yet to unleash the power of its combined platform strength”. Sadly, Hartigan’s baby was considered “the last of the major players to get integration right”.

News Australia made its (trade)mark in June

If News thinks it represents ‘Middle Australia’ and is popular with such, I’ve got a piece of land in Manhattan to sell them.

Would Crikey.com please consider running a competion seeking varations on their new masthead News Australia?
Who else will miss being able to write Limited News knowing it identifes the same corporation? Edward James