The Italian PM, his procurer and Rupert Murdoch

The businessman Gianpaolo Tarantini, who was the chief recruiter of the escorts for the "bunga bunga" parties hosted by the Italian Prime Minister Silvio Berlusconi, has made a startling allegation against Rupert Murdoch.

The Italian PM, his procurer and Rupert Murdoch. The businessman Gianpaolo Tarantini, who was the chief recruiter of the escorts for the “bunga bunga” parties hosted by the Italian Prime Minister Silvio Berlusconi, has made a startling allegation against Rupert Murdoch.

A transcript of tapped phone calls has Mr Tarantini alleging that the News Corporation boss offered him a million dollars to provide “spicy” information about Mr Berlusconi who owns television companies that compete with Murdoch’s own Sky Italia.

Details of the allegations are published this morning in Il Giornale. 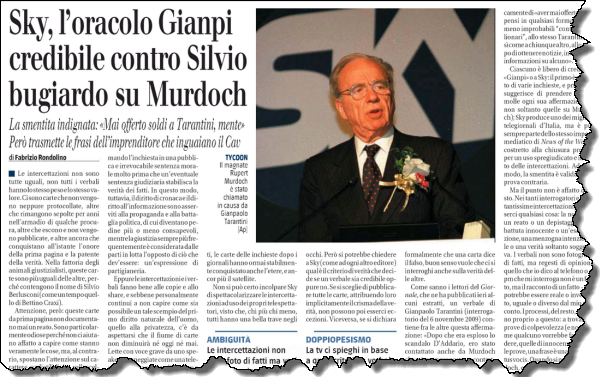 The newspaper does point out in its story that it does not know whether Gianpaolo Tarantini is telling the truth or misrepresenting it.

It does say though that, in the words of my instant Google translate, “it may be helpful to know that Mr. Sky (already in trouble in England sick and tired for journalism incorrect) was willing to pay large sums to blacken his rival Silvio Berlusconi, an entrepreneur and political destroy.”

Helpful indeed for the inquiry into the media about to take place in Australia too.

Murdoch as political blackmailer. Il Giornale is not the only source this week of descriptions of Rupert Murdoch as a political blackmailer. The former London Sunday Times editor Harold Evans, in a new preface to his book, Good Times, Bad Times, writes how “the secret of Murdoch’s power over the politicians is, of course, that he is prepared to use his newspapers to reward them for favours given and destroy them for favours denied.”

How much Rupert Murdoch knew and when he knew it may not be pinned down because he exercises what the sociologist Max Weber defined as “charismatic authority” where policy derives from how the leader is perceived by others rather than by instructions or traditions. The concept of charismatic authority as applied to the Murdoch empire may be best understood – as a concept, I emphasise, and not a personal comparison – in the use made of Weber’s definition by Sir Ian Kershaw, historian of the Third Reich. Kershaw argues that Hitler was not much absorbed by the day-to-day details of Nazi Germany’s domestic policy, but was nonetheless a dominant dictator.

Kershaw explains the paradox by adopting the phrase of a Prussian civil servant who said the bureaucrats were always “working towards the Fuhrer”. They were forever attempting to win favour by guessing what the boss wanted or might applaud but might well not have asked for. Similarly, in all Murdoch’s far-flung enterprises, the question is not whether this or that is a good idea, but “What will Rupert think?”. He doesn’t have to give direct orders. His executives act like courtiers, working towards what they perceive to be his wishes or might be construed as his wishes.

A few examples from the Times follow. They act this way out of of fear, certainly, because executions are so brutal but the fear also reflects a more rational appreciation of the fact that his “wild” gambles so often turn out to be triumphs lesser mortals could not even imagine.

The experiences I describe in Good Times, Bad Times have turned out to be eerily emblematic. The dark and vengeful undertow I sensed and then experienced in the last weeks of my relationship with Murdoch correctly reflected something morally out of joint with the way he ran his company. In the decades that followed my year at the Times, the inside rot was matched only by the menace that came to represent to the civil discourse and the whole political establishment.

Prime ministers, Tory and Labour alike, were so scared of blackmail by headline they gave him whatever he asked.

The Murdoch empire’s sense of humour. Rupert Murdoch’s Fox television network has banned a joke about phone tapping from its telecast of this year’s Emmy Awards. In the words of a Fox spokesperson the joke was dropped because it was inappropriate to make light of an issue being taken very seriously by the company, not because of the personal reference to Mr Murdoch. The Deadline Hollywood website has the story. 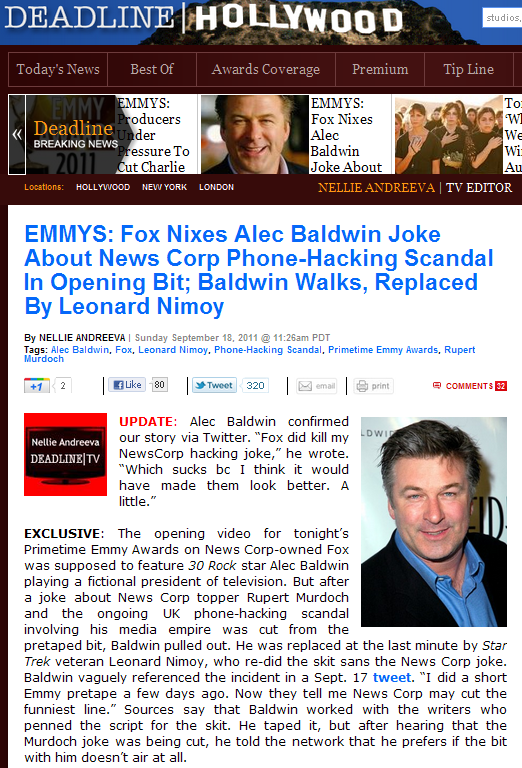 Someone near the PM  talks too much. This is not the kind of story a politician wants to see in the paper:

So how did details of Julia Gillard being given “special coaching to improve her delivery” when making public performances get into The Sunday Telegraph?

Clearly someone close to the PM speaks too much.

No ships were sunk but this lot of loose lips produced a weekend of media coverage devoted to making fun of our country’s leader.

Another reputation smashing coup. Julia Gillard certainly does have a way with her. At a stroke she devised a policy on boat people that has divided her own party, put tensions on the governing coalition with the Greens and enabled Tony Abbott to pretend to be caring about human rights. But then, she did make The Oz‘s Paul Kelly happy!

See details of this piece of political genius in Amber Jamieson’s report on The Crikey website.

The reference to Kershaw, and the comparison with Hitler’s acolytes “working towards the Fuhrer” was set out in a very nasty column in the Guardian a couple of months ago; pretty much word for word. Maybe a coincidence.
Murdoch is not a Nazi.
I object to the trivialising of the evils of Nazism by people who can’t think of anything clever to say.
This kind of slack expression and thought is somewhere up there with denial.
Your editor might think about keeping the Nazi metaphor for special occasions.
James Anderson

Wouldn’t it be delicious if Ol’ Rupe was brought undone by a phone tap? Won’t happen, of course, but we can daydream.