Rundle: a Review review reveals an enduring legacy of not much

One has to say something about the demise of The Australian Literary Review, especially in light of Nick Cater's somewhat freestyling herogram-to-self in yesterday's comments section.

It’s one thing to have a proxy war via a literary magazine — to have one around its closure would see self-indulgence squared. Neverethless, one has to say something about the demise of The Australian Literary Review, especially in light of Nick Cater’s somewhat freestyling herogram-to-self in yesterday’s comments section.

What’s most amazing about the ALR was that it were done at all — the Australia Council had already tipped a motza of money News Ltd’s way to do The Australian’s Review of Books a decade or more earlier, only to have it closed down by Lachlan Murdoch in a mix of cost-cutting and anti-intellectualism. Living up to Albert Einstein’s definition of insanity, this was done again — with OzCo, Melb Uni and MUP paying public funds to the largest media company in the world.

The A’sRoB had been allowed to operate relatively unmolested politically — but the ALR was born in the era of the Chris Mitchell Australian. There was a brief struggle over control (The Oz initially proposed loyalist Newsista Stephen Matchett as editor, at which point at least one backer threatened to pull out) before Stephen Romei took the chair.

Most of us thought Romei produced a pretty good review (disclosure: I was an occasional contributor) but when Melbourne Uni decided to pull the plug on funding it, there was an internal coup, and higher education editor Luke Slattery took it over, by striking a deal with the Group of Eight universities to fund it.

Slattery is a reasonable writer and a sincere devotee of books and ideas — but he’s also an obsessive about the creep of “civilisation-wrecking postmodernism, relativism, etc” into every of cultural life, and doesn’t miss a chance to have a crack. The first issue lived up to everyone’s fears — its split cover featuring Michael Costa’s snarling attack on the Greens, and a series of “2020”-style essays expressing a narrow, uncritical idea of universities, knowledge and society. The style — Pyongyang out of Pravda — said it all: 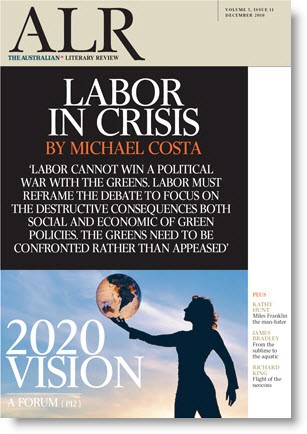 It got better, but Slattery’s prejudices against vast swathes of theoretical and critical work done in the universities over the past three decades made it dull, backward and achingly worthy — together with the usual Oz right-shift and exclusion of anything left of Martin Ferguson.

You can get away with that in The Oz proper, but Slattery was foolish to imagine that the “postmodernists” and “deconstructionists” he has no time for, have no power in the G8 hierarchies. There was general embarrassment that this was representing the best that could be thought and read, and funding duly ceased. I may have helped, showing a couple of people the contents pages of a few issues — between the glory of the classics article (author L Slattery), neoliberals on university policy and my good friend Peter Craven on audio books of Dickens, they didn’t find much to stop them pulling the plug.

Which is a pity, because a genuinely wide-ranging review mediating between academic and public life would have been great, and would have retained support. Slattery — who was the last editor of the A’sRoB and has now had the publication shot from under him twice — should have made more of an effort to do what the best editors do: include stuff whose ideas they really don’t like, and know that there is something middle way between a party line and a free-for-all — a directed, but truly pluralist focus for debate and ideas. A good man fallen among Newsistas, and the damage may now be done.

On Rupert’s dime he could do as he pleased. The ALR was a semi-public resource — and post-Stephen Romei it was screwed up by people who can no longer think outside the Anti-News Unlimited mantra that everything must be subordinated to one narrow political agenda or another. It would be wrong to say that the years and hundreds of thousands spent on the the A’sRoB and ALR were a waste. Good issues have been produced, and they added to something.

But nothing enduring has been created — and had people determined to do that 15 years ago, when the A’sRoB was created, it would be thoroughly established now. Instead ALR (II) propagated the wearying sense that of monotonous enforcement, the very opposite of the enlightened, questioning civilisation it purported to defend. Subtracting from rather than adding to genuine intellectual life, culture itself became nothing other than another place for a proxy war.

Rundle: with the ALR gone, time to rethink our public sphere

Upheaval at ALR as editor booted amid funding deal

Yes, I still don’t understand Slattery’s maintaining the rage against post modernism. Sure, it had its absurdities but then so do most movements, and it was always weird to imagine that universities are being destroyed by post modernist relativism as Slattery seems to believe.

yes Pete, and that’s why I said it was a ‘semi-public’ institution – read the goddam article before commenting.

I was intrigued when I saw that well known aphorism concerning insanity attributed to Albert Einstein. Well Wikiquote reckons it was coined by Rita Mae Brown (and paraphrased in Narcotic’s Anonymous). So there!

This article is the point where Guy Rundle’s writing starts to resemble Greg Sheridan’s. They call it the Sheridan Turn. Here’s an ugly but revealing sentence: “I may have helped, showing a couple of people the contents pages of a few issues — between the glory of the classics article (author L Slattery), neoliberals on university policy and my good friend Peter Craven on audio books of Dickens, they didn’t find much to stop them pulling the plug.” So this is a man who happily contributes to the ALR under one editor, but then lobbies against the publication when the editorship is transferred to someone who (I assume) won’t commission articles from him. Be proud Rundle. Another victory for you in the ridiculous media war in this country. I bought The Australian for the ALR. Of course the Costa ‘essay’ was ridiculous. And every issue contained a bad piece. But there were some good articles. I would have hoped our literary culture could support a mass circulation journal such as the ALR. I thought we’d grown up. Evidently not.