Dwarfed by old news … CMail on hair … Wilkins on Goldblum …

In today's Media Briefs: old news dwarfs real news for News.com.au ... Front Page of the Day ... Meanwhile, in Alice Springs ... Richard Wilkins on why he reported the death of Jeff Goldblum and more ... 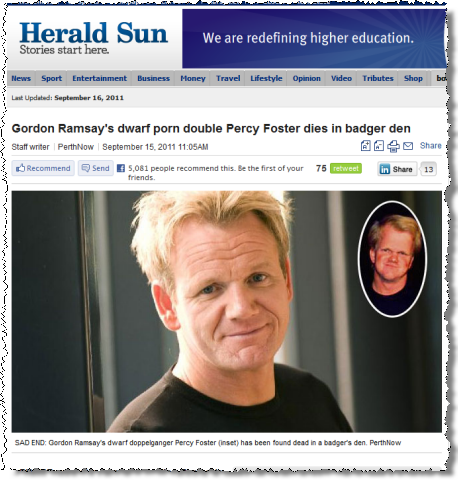 So much so, it is topping the most-read-list on many of News.com.au‘s websites (even beating Mark Harvey’s sacking as Freo coach on Perth Now):

But the story is over three weeks old. Crikey first reported this in our August 23 edition of Media Briefs: 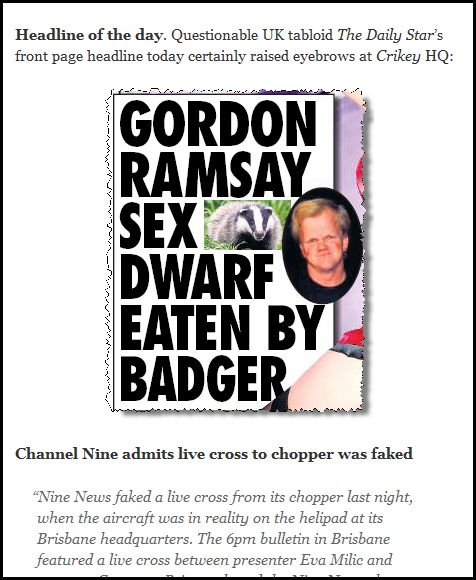 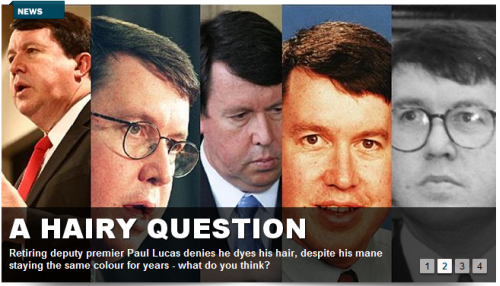 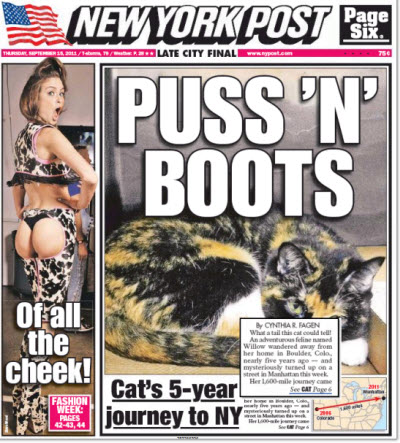 Meanwhile, in Alice Springs… Major news today as reported on the front page of the Centralian Advocate … the laying of the world’s third biggest egg! 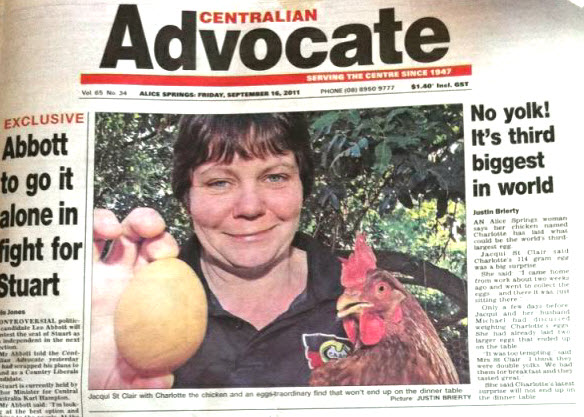 Wilkins on why he reported the death of Goldblum

“The man who now co-hosts Weekend Today Cameron Williams was the person who handed Richard Wilkins the erroneous information that actor Jeff Goldblum was dead, the entertainment presenter has revealed.” — mUmBRELLA

“How are the constant changes to TV schedules impacting on television print guides? According to editors, reviewers and critics they are making life a nightmare. The changes are so frequent that editors are dumping feature articles, asking staff to write last minute reviews, copping angry calls from the public.” — TV Tonight

“Since 2007, veteran technology journalist Paul Gillin has been tracking the demise of newspapers and highlighting the ones that thrive on a website called Newspaper Death Watch.” — International Journalists’ Network

“A Serbian journalist Vienna, Viktor Lazic, has been under detention for 12 days in South Ossetia after allegedly wandering across its disputed border with Georgia.” — The Guardian

Rules of the game change as sports journos compete with teams

“Teams, leagues, associations, athletes and agents are all increasingly bypassing journalists and using digital tools to communicate directly with fans. Right now, this stuff is mostly marketing. But as sports organisations become more sure-footed digitally, they will become journalists’ competitors. And that will lead them to reassess bargains struck with newspapers generations ago.” — Poynter

The Courier-Mail on Paul Lucas’s hair: frankly, this is one of their more intelligent efforts at political reporting/analysis.