Speak up, Malcolm, we can’t hear you

Tony Abbott had this to say about the government's Clean Energy Future legislation yesterday:

Tony Abbott had this to say about the government’s Clean Energy Future legislation yesterday:

”disastrous for our democracy …

“This isn’t just nonsense, this is nonsense on stilts by a government which has no real understanding of the economy of the real world in which most of us live …

Malcolm Turnbull had something to say, too. And then he didn’t. He was listed on Tuesday night to speak on the issue, but then mysteriously his name was removed from the list yesterday morning. According to staff, it had been included on the list in error by chief whip Warren Entsch’s office.

Turnbull later found his voice at a press conference, where he said the scheme before the Parliament had a lot in common with the scheme negotiated with Labor in 2009, and he would “study the debate” before deciding whether to speak.

Turnbull had plenty to talk about in 2009, right before he lost the Liberal leadership:

“This has now become a question not simply of the environmental responsibility of the Liberal Party but of its integrity.

“That is absolutely fatal.”

And here he is in April this year talking to the BBC’s Hardtalk: 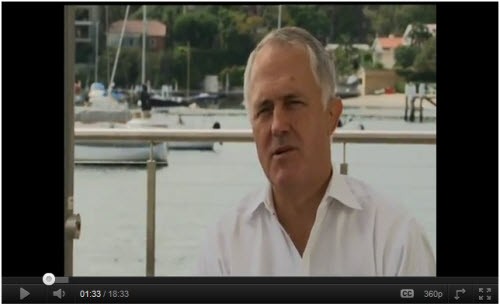 There are choice quotes such as:

“… the scheme that Kevin Rudd proposed in 2009 … was really the same policy that John Howard had had when he was PM. You have to remember that there had been bipartisanship for quite a while that Australia should cut its emissions … certainly what was seen as the most efficient way … which was a market-based mechanism.”

“… oppositions shouldn’t oppose everything, nobody argues that …”

“… we’ll see what develops … obviously it’s always open for any member of the shadow cabinet if they can’t live with the collective decision to resign, and that of course is what Tony Abbott did to me …

“… the answer is I’m not about to resign. But there is the principle of whether you should seek to … put a price on carbon …

“Tony Abbott’s policy, the coalition’s policy, is to cut emissions by … government buying billions of dollars worth of carbon offsets … it’s not a market mechanism scheme in the true sense … as to whether … the carbon tax ultimately emerging from this Green-Labor coalition is going to command support … we just don’t know … it is likely to be a very extreme economically damaging model. Just because someone like myself is in favour of a market-based mechanism of putting a price on carbon doesn’t mean I’m going to support any variant on that theme …”

Given the legislation currently before Parliament is not entirely dissimilar to Rudd’s original CPRS that Turnbull supported and, as a consequence, lost his leadership over, we’ve very keen to hear what Malcolm has to say after he has picked over all 18 pieces of legislation.

Abbott’s gory pledge would be a legal bloodbath

Funny, you dismiss Ferguson speaking on this subject recently because he says things you don’t like and he isn’t the leader

Conversely you prominantly highlight Turnbull’s thoughts from several years ago because you like what he has to say, even though he is not in a position to set policy for the Coalition and because he is not Abbott.

Crikey, every day, you become less a media organisation and more an advocacy service.

I can get that anywhere for free, that’s not why we pay our subscriptions.

Ferguson wasn’t being censored by his own party. Some much for Abbott commtment to free speech

Other than a colouful turn of phrase did Abbott actually mount an argument or was it just so much hot air and political posturing. You know the Selling his Ar#e to get power type approach.

Every credible scientist and economist, both in this country and overseas, has said that the coalition policy WILL NOT WORK, and that putting a price on carbon pollution WILL WORK. So what exactly is your point, Michael James?
There are many points of view in Crikey that I don’t agree with either. But at least we have an opportunity to make comment, especially on the facts. Now it is a fact that Malcolm Turnbull said what was reported in this article, and Crikey it is therefore quite within its rights to highlight that. It is also your right to comment as you see fit – but don’t expect all of us to agree with you. And you should accept that other Crikey subscribers have the right to agree or disagree with your point of view. We would all be better off on this site if everyone engages in any debate in a civilised way (as you have done), but we can all do without your threat to withdraw your subscription. Just do it, if you are not happy with the product. Then you can only read material which presents your point of view. Pretty boring pastime, I would suspect!

When I read or hear Tony Abbott’s opposition to whatever he’s opposing it’s impossible to know what he’s talking about without first being told.

He speaks in such broad strokes, a random collection of negative generalising, without the slightest bit of analysis of the subject that it’s easy to think he doesn’t care what the subject is. It sometimes feels like he comes up with a collection of negative sound bites – ‘bad government on stilts’, ‘political suicide notes’ (hasn’t that been done before?), ‘illigitimate etc and son’ – and then applies them to whatever the topic of the day is.

Although, to be fair, ‘stop the boats’ is straightforward enough.

Turnbull refused to sell his soul on this issue in 2009 and has a prime opportunity to demonstrate his leadership qualities again. If he crossed the floor on the carbon tax vote it may cause the house of cards to fall on an increasingly obnoxious Tony Abbott. I wish.