In today's Media Briefs: Front Page of the Day ... Coulson favoured chancellor in coverage of scandal during time as editor ... 3AW and 2GB surge in radio ratings ... The Week appoints Alison Wright as new editor and more ...

Front page of the day. As the threat of a Greek default grows increasingly possible, France is being drawn into the expanding European financial crisis. France’s Paris exchange fell more by 4% yesterday as it braced for the news that Moody’s would be downgrading three of its biggest banks. As French newspaper La Tribune noted on its front page today, “Stop the massacre”: 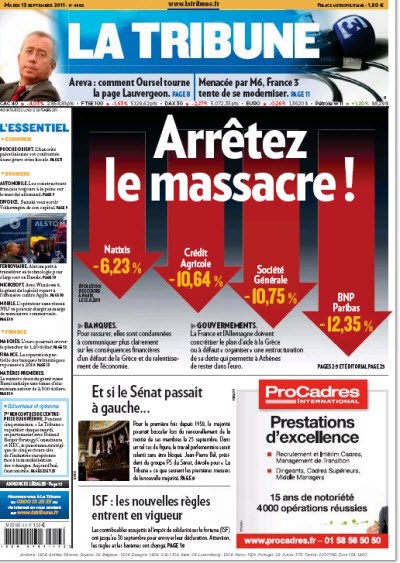 The Department of Corrections. Adelaide’s Sunday Mail had to correct the record over incorrect attribution to a comment made by AFL CEO Andrew Demetriou: 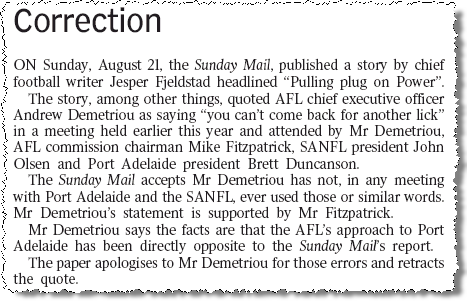 “So why was chancellor George Osborne so keen to employ Andy Coulson? Tonight Natalie Rowe, the woman at the heart of drugs and prostitution claims against the chancellor, has spoken to PM in her first broadcast interview.” — PM

“Natalie Rowe, the former escort agency boss who claimed to be friends with chancellor George Osborne, has told an Australian broadcaster that her phone was hacked by the News of the World.” — The Guardian

“Talk stations 3AW and 2GB have stormed back to market dominance in Melbourne and Sydney in the sixth radio ratings survey of the year.” — The Australian

“Three year-old current affairs magazine The Week has appointed Alison Wright as its editor after David Salter stepped down.” — mUmBRELLA

“Among the online activities that occupy more time than news: online games, portals, videos/movies, instant messaging and classifieds/auctions. Nielsen notes slivers of time on speciality news, including ‘computer and consumer electronics news,’ but they’re counted in a broad ‘other’ category.” — Poynter

“But that’s not a topic on the schedule at this year’s Online News Association Conference, says Jane McDonnell, ONA’s executive director. ‘It’s important to note that we banned the phrase ‘future of’ anything this year,’ she says. That, she adds, is because journalism has already entered that future.” — American Journalism Review

Who needs writers when an algorithm can do the job

“Technology is already undermining the economics of traditional journalism. Online advertising, while on the rise, has not offset the decline in print advertising. But will “robot journalists” replace flesh-and-blood journalists in newsrooms?” — Sydney Morning Herald

“But will “robot journalists” replace flesh-and-blood journalists in newsrooms?”