ALR editor Luke Slattery confirmed this morning that the monthly supplement, published as part of The Australian, will close its doors in October following a July decision by the Group of Eight universities to withdraw $350,000 in annual support — the vast majority of the ALR‘s funding.

Crikey understands an ad-hoc rescue deal with several sandstone institutions was pursued to bridge the gap, but was ultimately unworkable. And News Limited, said to have contributed an additional $350,000 in costs off its own bat, was unwilling to bridge the gap given the dire advertising climate. Senior Australian editorial staff then made the ultimate call to end production. 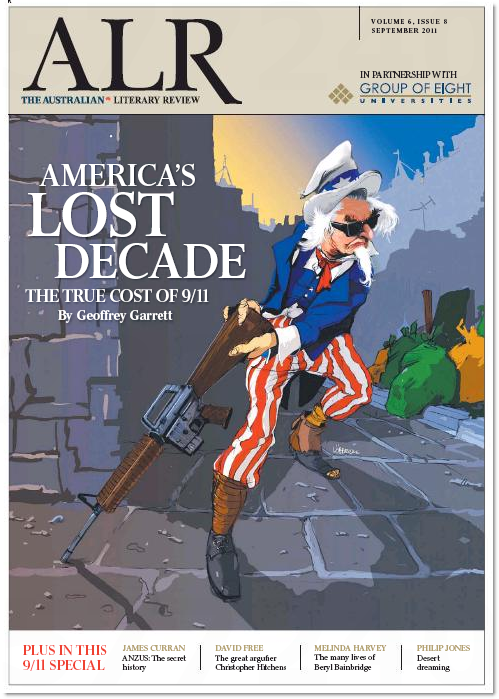 The penultimate September edition of The Australian Literary Review

Slattery, who is expected to move to another part of The Oz when his job becomes redundant, said that “of course” he was disappointed with his baby’s axing.

“I think it was a bad decision by the Group of Eight,” he told Crikey.

The now-collapsed one-year Go8 deal was struck last October to keep the ailing masthead afloat after the University of Melbourne declined to renew a three-year funding deal worth $350,000 a year. The Australia Council’s $150,000-a-year commitment had also expired, as did a cash for column arrangement with the Pratt Foundation.

Crikey understands the university payload was overseen in some cases by bean-counting marketing flacks who complained they weren’t getting enough bang for their buck.

G08 policy director Mike Teece confirmed the decision to withdraw funding, adding that “individual universities will make their own decisions about any further funding support”. However, they appear not to have come to the party despite some initial interest from University of Melbourne Vice Chancellor Glyn Davis. Davis and Melbourne University Publishing tsar Louise Adler were crucial to the ALR’s resuscitation in 2006.

Slattery, who last year replaced Stephen Romei as editor during negotiations with the G08, said the title might continue in an online format but he was unlikely to remain personally involved.

He said he’s achieved his goals during his 12 months in the job to shift the publication’s gaze away from a concern with literary purity to something that actively engaged in public debates.

“What we were trying to do — which created some disquiet in literary circles — was to create a public intellectual journal, a journal of ideas,” he said. “We wanted to create a much broader social, political and economic publication using the full intellectual resources of the university world.

“We actually achieved our goals, as expressed to the Group of Eight when we went to them. It was starting to look like a unique product.”

Last December, Slattery published a swingeing cover piece by former NSW Labor minister Michael Costa attacking the Greens which apparently rankled with some universities. However, the unpopular spray was not central to the final decision to cut ties with News during the Go8’s July board meeting.

Literary doyen and regular ALR contributor Peter Craven (who penned an extensive take on Julian Barnes’ The Sense of an Ending in this month’s edition) mourned the title’s passing this morning.

The ALR first rolled off the presses in September 2006 under the editorship of Stephen Matchett. Romei took over in 2007 as the joint venture between News, the University of Melbourne and the Australia Council gathered momentum.

Slattery’s ascension followed a successful stint as The Australian‘s higher education editor. He formerly helmed The Australian’s Review of Books — the ALR‘s precursor publication until it too folded in 2001.

His final ALR will hit the streets on October 5.

Rundle: with the ALR gone, time to rethink our public sphere

Crikey says: coughing up for The ALR

Letting the fireworks out of the bag

I will be sad to see it end. However, it always seemed of marginal financial viability. So now we are left with the London and New York reviews of books.

One of the ALR’s many problems, Gavin Moodie, was those two publications’ ready availability, and relative quality of writing.

At laast The Australian gets off the public teat.

Sad, but one of the reasons I hardly ever saw it was because it was in that pernicious organ The Australian Monday to Friday. Would there be a way of stand alone publishing the ALR – with the universities and others chipping in – a la New York Review of books TLS et cetera? How about it publishers?

Even moving it to the less malodorous Weekend Australian (you don’t have to turn to the toad Pearson) might have saved it’s arse.

I agree. I haven’t been a close reader of all 3 publications but I haven’t understood how the Australian Literary Review has been much different from the London and New York reviews of books aside from being thinner.

The obvious alternative publisher is Andor Schwartz who publishes the Quarterly Essay and is the proprietor of Black Inc. However, in its current form it might be too self referential for him.