Melbourne adult education firm takeover. The Centre for Adult Education in Melbourne’s CBD will be taken over by Box Hill TAFE, Crikey understands. The move hasn’t been announced by Education Minister Peter Hall, the CEO, senior management or the board but is known by CAE staff who, according to one, are “waiting for their management […]

Melbourne adult education firm takeover. The Centre for Adult Education in Melbourne’s CBD will be taken over by Box Hill TAFE, Crikey understands. The move hasn’t been announced by Education Minister Peter Hall, the CEO, senior management or the board but is known by CAE staff who, according to one, are “waiting for their management to give them the courtesy of talking to them”. Our spy reports:

“This merger follows a couple of years of very poor financial results, the CEO demanding and getting pay parity with other CEOs and receiving a board-approved 70% pay increase at a time of serious deficit in finances, the biggest cuts in staff numbers with 30% of ongoing and fixed-term staff positions being cut earlier this year. The CAE is a 60-year-old independent institute that is one of the last providers of education to adults. Whether or not it survives this merger remains to be seen.”

Insurance pain at both ends. Queensland flood victims may be struggling to squeeze money out of their insurance firms, as we said yesterday. But insurers are still stinging other customers for the payouts. One reports: “I’ve just received my house and contents insurance renewal yesterday and was stunned to find that the premium had increased by just over 25%. Having made no policy changes or claims in the past 12 months I rang my insurer (APIA) and was advised the increase was due to natural disasters in Queensland. Looks like some insurers are screwing customers at both ends of their policies.”

The Gillard stat dec you can’t read. Yes, we have the Bob Kernohan statutory declaration involving Julia Gillard. No, we won’t be publishing it. But thanks to the many, many of you who provided a copy.

Pink batts rotting in the sun. A Crikey reader captured this shot of the insulation factory next to his office. “If you’re wondering what happened to Peter Garrett’s political career, here it sits quietly rotting,” he writes. “They’ve been there ever since the insulation scheme was cancelled and seem entirely unusable now.” 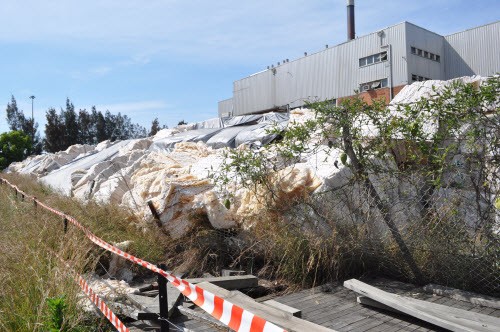 Uni campaign tips: ‘midriff wins’. Federal politics has nothing on those conniving student pollies. Crikey has been sent a campaign document from Fresh, the right-wing student union party at the University of Queensland, which provided helpful talking points for getting students to the voting booth and dealing with lefty lies ahead of its 2009 campaign. Some choice cuts:

“﻿Even if you’re not having fun, at least look like you are. People are attracted to a positive and upbeat person. We are the most normal team on the ground, and should look like it. We’re FRESH, attractive, smart and not dirty. Go hard, but enjoy yourself. Humour wins votes.”

“Don’t do dodgies in your team shirt. Ripping down lefty posters is tempting, ditto with stealing all their leaflets, putting their car up on bricks, whatever. However, it looks very bad if the team’s associated with this. Take your shirt off first.”

“Dress ‘normal’. We all know what the ordinary voting student goes for … this is our market. Guys — go casual bogan: no tie, suits or beige pants. Girls — hot clothing is a guaranteed vote-winner if you’re comfortable in it. A bit of midriff, leg, all good. Our team shirts are yellow and green, so dress complementary!”

“If you think it’ll work, flirt. Girls, you’re on an almost universal winner here. Guys will have to pick their battles wisely — don’t be a sleaze.”

“Be aware of positioning. Under no circumstances appear to be bullying, but it’s good practice to make sure that you have prime position. If you’re walking a voter around, put yourself in between them and the left campaigner.”

“Don’t EVER think that the enemy are your friends. Some of them are very nice people, but they will pick politics over you in a second. They’ll go home and write nasty emails about you on their e-mail groups — trust me. Chat amicably to them, sure, but don’t ever ask them to mind things, trust them with personal or campaign information, concede a point or apologise to them.

“You have a great excuse to approach everyone and it’s fun. Nobody’s going to punch you or do anything much more rude than say ‘already voted, go away’ and shuffle past. Approach nerds, jocks, matures, emo kids, ethnic groups. Be charming.”

“In the last few days, get desperate. The left will tell voters that we are winning (even if we aren’t) and that it’s their imperative to vote that very second to keep us out. We need to be equally desperate.”

We particularly liked the “types of voters” guide — avoid “lefty campaigners, lunatic staff members, QUT students, bearded freaks” — and the suggested response when pressed on “Josh” being a racist: “A misconstrued statement within friends has been misrepresented.” We’re sure. Click through for the full document … 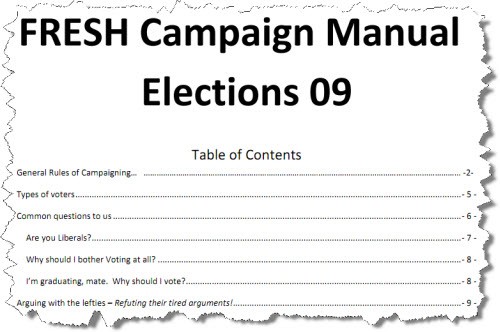 A November election? Hardly. From the 3AW Rumour File: “‘Early election’ says he overheard a relative receiving a phone call from the people that set up the electoral voting booths. The caller says leave November free.” You heard it here first, folks. (Well, second.)