I would have thought ordinary politeness dictated that our neighbour be briefed on what is in the Australian government's mind.

Strangely pig headed. Making such a thing of not talking to the President of Nauru about using the island to process asylum seekers strikes me as strangely pig headed of Prime Minister Julia Gillard. I would have thought ordinary politeness dictated that our neighbour be briefed on what is in the Australian government’s mind.

Supposed market believers turn disbelievers. The message from the international money markets would seem to be clear enough. Interest rates on government bonds in the United States at under 2% are the lowest for 60 years. In Germany the yield is 1.85% and in Britain just 2.5%. People with money are clearly less concerned about the threat of inflation than fearful of slow growth.

As Martin Wolf explains in London’s Financial Times of London, the markets “are saying: borrow and spend, please. Yet those who profess faith in the magic of the markets are most determined to ignore the cry. The fiscal skies are falling, they insist.”

Are the markets mad? Yes, insist the wise folk: the biggest risk is not slump, as markets fear, but default. Yet if markets get the prices of such governments’ bonds so wrong, why should one ever take them seriously?

No free market for Switzerland. No more of that floating exchange rate business where markets set the rate for Switzerland.The Swiss National Bank overnight said it would “no longer tolerate” a euro rate below 1.20 francs.

“The SNB will enforce this minimum rate with the utmost determination and is prepared to buy foreign currency in unlimited quantities. The massive overvaluation of the franc poses an acute threat to the Swiss economy and carries the risk of a deflationary development,” it said.

Long shots sometimes win! I liked this little reminder from the Grasping Reality with Both Hands blog this morning that the unexpected sometimes happens: The Swiss National Bank’s announcement that a weak Swiss franc was in Switzerland’s interest, and that it stood ready to sell unlimited quantities of Swiss francs to resist future appreciation, caused a 20 standard deviation daily decline in the value of the franc.

The odds of such a thing happening under a Gaussian normal distribution are less than 1.25 x 10-89. Much of the jump in the seasonally adjusted growth rate for the June quarter was because of a build-up in inventories.

Australia loses a record. The Philippines have toppled Australia as the home of the world’s biggest crocodile. Details of the humiliation for the Northern Territory News are on the Crikey Stump blog. 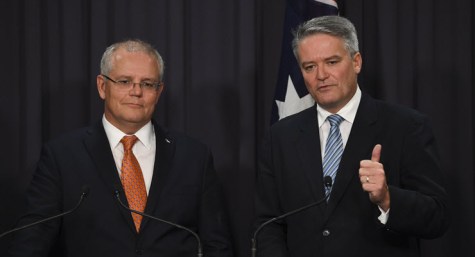 Bearing in mind the Prime Minister’s announcements on the East Timor solution without consulting the East Timorese government, I would say that her not talking to the President of Nauru is simply par for the course

Maybe the PM’s position has been made perfectly clear to Nauru? He doesn’t need to be told, or perhaps he has been? So the politeness has been extended. Who knows? Perhaps you should ask the PM ?

Whatever you think/thought of the Malaysian solution, it at least had some arguable benefits even if you didn’t think they outweighed the moral costs.

Nauru has none of the benefits of Malaysia – it is not a transit point for refugees, a Nauru solution does nothing to improve engagement between Australia and the countries in our region that have to deal with large numbers of refugees; Australia paying money to Nauru doesn’t improve conditions for any refugees.

Additionally, the Nauruan government appears to have been quite happy to effectively allow policy to be formulated between themselves and Tony Abbott bypassing the actual government of this country. For that reason alone, I can’t see why they’d be surprised to get a somewhat cool reception from Julia Gillard.

This incessant sniping at Julia Gillard is getting boring…seems to me the strangely pig headed one is the writer….get over it and give us all a break Richard

And in other news, petrol was used to extinguish fires.

“Please do not be alarmed,” it said, “by anything you see or hear around you…We are now cruising at a level of two to the power of two hundred and seventy-six thousand to one against and falling, and we will be restoring normality just as soon as we are sure what is normal anyway. Thank you…”