It's the deliciously bitchy tale of a non-existent cream puff, the media's obsession with skinny models and Australia's largest department store chain.

To promote the relaunch of its plus-size range Big is Beautiful, Myer recently ran a modelling competition aimed at “real” women who wear dress sizes of 14 and above (i.e. the majority of Australian females). The event was a PR coup for the brand and Myer received wall–to–wall coverage of its use of professional and “everyday” catwalk models. But what did the models get in return — apart from a rabid fashion media calling them “fat”?

The Big is Beautiful competition offered the chance for 40 finalists to go to Sydney for a judging, from which a final 10 were awarded a spot to walk alongside curvy model-of-the-moment Robyn Lawley in Myer’s Big is Beautiful catwalk parade for the Sydney Fashion Festival. The overall winner would be bestowed with a $5000 Myer wardrobe, a 12-month contract with Bella Model Management and a $2000 “style make-over”.

Sadly, this isn’t the heart-warming tale of a fashion retailer caring for its consumer, curves and all.

Myer didn’t cover any travel, food or accommodation costs for the model competition entrants — many who travelled interstate.

In comparison, the 2011 Girlfriend Rimmel modelling competition covered the cost of flights and accommodation for finalists travelling to Sydney for its final shoot. It also offered to pay travel costs “in its complete discretion” of contestants who were preselected to attend the state finals but didn’t live in the capital cities. City Chic, a plus-size clothes brand, ran a modelling competition with BGM models to win the chance to walk in its parade at the L’Oreal Melbourne Fashion Festival in March. City Chic covered the costs of flights, accommodation and meals for the winner.

But while Myer didn’t pay costs, it did happily pimp out contestants to media outlets for interviews about the Myer parade. It arranged for press interviews and gave competition winners Myer clothing to wear for accompanying photo shoots. But it failed to provide any advice or support to non-professional “real” sized models dealing with a potentially hostile fashion media. And how hostile it turned out to be …

“Like many women of fuller figure, they said they felt marginalised by fashion’s fixation on thinness. They professed they ate healthily and took care with their appearance — they were simply bigger-boned girls.

Then came the clanger. Coyne told me that when she heard she had been selected for the show, she thought: ”Oh, I can eat a cream puff now or a few cream puffs and it won’t matter, in fact, it will be a good thing for the show. But then I felt guilty, so I didn’t.”

Problem is, Coyne never said the words “cream puff”. Instead, after Safe had put her notebook away, making it appear the interview was over, Coyne made a comment about looking forward to eating and checking out Sydney restaurants now she’d been selected. The other model being interviewed, Tanya Briggs, told Safe not to use the eating quote, because years ago she’d said a throwaway line about cream puffs in an interview and subsequently the main focus of the article had employed the stereotypical “fat girl eating” angle, despite the fact that she’d mainly spoken about being comfortable in her own body.

Coyne’s response? “I can honestly say I never uttered those words. She was so nice when she interviewed me that I’m shocked that she would do that … I felt like ordering some cream puffs from a local Sydney bakery and sending them to Georgina.”

The rest of Safe’s opinion article questions why plus-size models are being encouraged on the catwalk. “The simple fact is that clothes look better on beautiful, slender young women,” declared Safe.

“The whole point is that there women who are a size 16 and plus and they want to know how clothes look on women that size,” replied Coyne.

After Coyne and Crikey contacted The Sydney Morning Herald, the offending quote was removed from the article on Tuesday afternoon and a correction run in yesterday’s paper: Safe — a former fashion writer at The Australian — was apparently inspired to write her column about reading this article in The Australian by Damien Woolnough on Myer’s plus-size parade.

Woolnough declared “Big can be beautiful but fat should never be in fashion.” “Most of the models looked healthy but some looked obese. While most fashion festivals ban models for being too skinny, why is it OK to see fat women on the runway?” he asked.

Bella Model Management, whose models walked in the show, fought back against the claims of obesity in an article on its Facebook page. “To use the word ‘obese’ to describe any of the women involved in Tuesdays show, professional model or competition winner, without having the statistics of each is ignorant, and a blatant attempt to cash in ‘controversy currency’ and grab headlines,” wrote the plus-size modelling agency.

But it wasn’t all bad news. Myer got impressive international and national coverage for its plus-sized parade. Media monitors counted 117 mentions in the Aussie press in the past month for the Myer parade, thanks to 34 television mentions, 35 press mentions, seven radio mentions and 41 internet mentions. Global coverage — covering the parade and the backlash — came from the US (including well-known gossip blogger Perez Hilton’s fashion blog Coco Perez), the UK, Canada, New Zealand, the Netherlands and even Ghana.

What did the competition model finalists get in return for spruiking the store? A Myer gift pack worth $25.

They covered all their own expenses — although several had to either fly home interstate or stay in Sydney for the week between the final judging and the catwalk show (it clearly states in Myer’s terms and conditions of the competition that “Travel to and from and all other expenses associated with this event are at the participants’ expense.”)

Many had to purchase new nude-coloured underwear for the parade. The non-professional models were forced to practise in the hallways of the Myer office at the back of the store and only got the chance to practise on the actual catwalk an hour before the show started, although they say minus-sized models in other shows were given ample time to practise on the real catwalk, despite being accustomed to modelling.

Competitors complained that several of the Myer parade clothes were ill-fitting, with one competition contestant telling Crikey although she is a size 14-16, she was given size 18 pants to wear. “You can see in half the photos that the clothes don’t fit properly and I’m not sure why Myer didn’t make more of the opportunity to showcase their clothes by having them fit the models properly.  Oversize clothes always make someone look bigger,” she said. One of the backstage crew on the parade apparently told the models “you girls should have worn what you came in with, you all looked gorgeous when you arrived”. You can check out photos from the parade here.

“The second that it was over, we were cleared out really fast. No email or anything … such a lack of appreciation”, said the model, who asked to remain anonymous. “I’m not sure if they [Myer] just thought ‘we’ll do token fat girl show’.”

Afterwards, despite the media backlash against whether these average-sized women were “healthy enough”, they received no support or follow-up from Myer. “I just did it for a bit of fun, I wasn’t expecting to be insulted. Maybe Myer could have prepared us for it,” Coyne told Crikey.

Not that the feedback was entirely negative. “People over size 12 love fashion too, but up until recently there hasn’t been much to love about fashion for them, as they haven’t been catered for, so it’s going to take time to build momentum and has to start somewhere,” noted the anonymous model contestant. “It’s a beginning and Myer should be applauded regardless.”

Despite numerous attempts to contact Myer, it didn’t respond to Crikey before deadline.

Myer is My Disaster: can anyone save the ailing retail giant? 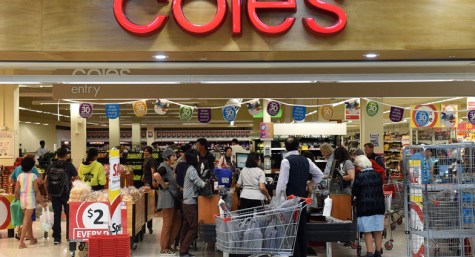 Exploitation, thy name is fashion. Cynics are us.

I just had a look at the pics of the parade – man, Myer really saddled these models with some frumpy crap. The whole thing is very cynical – they’ve gone to the effort of staging the parade but then dress the models to look 20 years older, with very little visual theatre using makeup, hair and jewellery, the way that most other shows do.

Contrast with this amazing, edgy show by Gisela Ramirez, a plus-size designer. The clothes mightn’t be to everyone’s taste but they’re fierce!

I am not normally at all interested in this peculiar thing called “fashion” and generally regard those who are with a considerable degree of suspicion. I buy clothes, not “fashion”. But I liked this article. I took a look at the photos and I thought the women were all beautiful and much to be preferred to the malnourished stick figures one usually sees. I find the extreme thinness of most models reppellent. But then, I am only a bloke and thus my opinion does not count.

Pssst Amber…It might just be a good time to unleash “The Hound” on Myer.
Let’s see how those “fashion-lite w*nkers” like it when Firstpitbullonthemoon gets his teeth into their skinny arses. 😎

It would appear these ladies were rather ill used by Myer, which is disappointing.

I am the first to decry the obsession the fashion industry has with underweight models, and the devastating impacts this can have on physical and mental health of girls in our society.

In terms of health outcomes though, we need to be a little careful in using phraseology such as “real” women, to normalise and / or glorify women with dress size 14 and up.

The fairly clear implication is that dress size > 14 is “normal” and anything less is “unrealistic” or “abnormal”.

Statistics may well show that a majority of Australian women are dress size 14 and up, but that does not mean this should be something we as a society accept as appropriate or desirable from a health perspective.

A recent advertising campaign by the federal government has been trying to publicise the point that a waist measurement over 94 cm for men, or over 80 cm for women, is associated with an increased risk of a number of serious health complications, including cardiovascular disease, hypertension, cancers and diabetes.

A dress size of 14 corresponds to approximately a 78 cm waist, so would be barely on the safe side of this metric. It is well known that Australian clothing retailers will label their clothes with a much smaller size than the genuine size, so a size 14 in Australia almost certainly corresponds to > 80 cm at the waist.

I don’t know if we are doing more harm than good by promoting this as a norm for women to aim for.