Understating unemployment? The monthly labour figures of the Australian Bureau of Statistics during the last year have put the participation rate in employment at over 65% with the number unemployed around the 5% mark. Yet a survey result by the Bureau published this morning suggests that the participation rate significantly understates the number of Australians who could be enticed into the workforce if jobs were available. 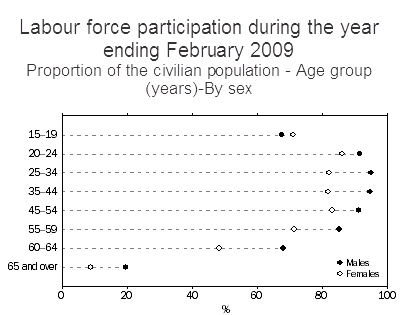 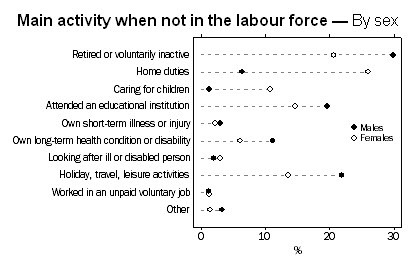 Of the 8.9 million persons aged 15 years and over who were outside the labour force at some time during the year ending February 2011. Of these:

Believe it or not. Melbourne is the most liveable city in the world. And Sydney, Adelaide and Perth also make it into the top ten list on the Economist Intelligence Unit’s Liveability Ranking released overnight. 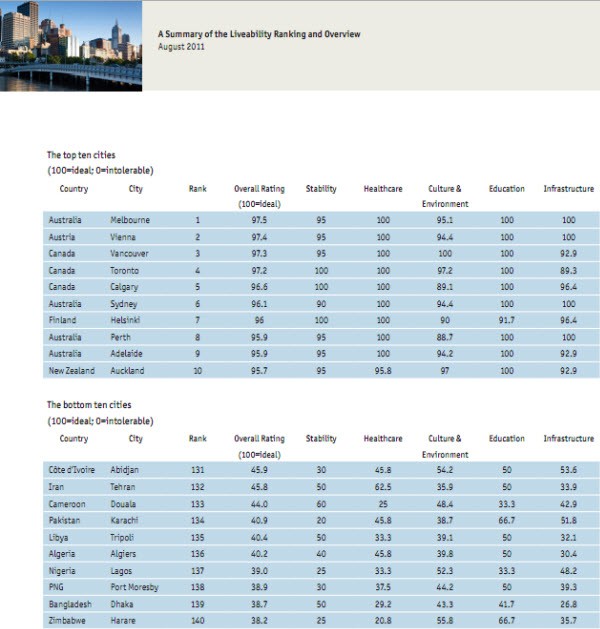 Melbourne now replaces Vancouver as the most liveable city in the survey. Vancouver’s overall score could see further downward revisions in future surveys following riots in June this year. Although the riots came too late in the year to have an impact on the score of the current survey, further unrest may affect scores for the city in the future.

And what makes Melbourne so special? Here’s how the EIU scored it:

There’ll be a tax on s-x next. Well, there already is actually. The German city of Bonn has introduced parking meters for prostitutes in an attempt to raise a few extra dollars.

Prostitutes working the streets of the old West German capital now have to buy tickets from converted roadside vending machines that once dispensed tickets to the city’s drivers. A night’s ticket will set a prostitute back £5.30, irrespective of the number of clients they have.

Monika Frombgen, a spokeswoman for Bonn city council, said the ticket machines would bring street prostitutes into fiscal line with their peers in registered s-x establishments.

Learning from the British. In the United Kingdom the response of the Conservative-LibDem government to the phone hacking disclosures includes an inquiry to be conducted by Lord Justice Leveson into “the culture, practices, and ethics of the press in the context of the latter’s relationship with the public, police, and politicians.”

To me that seems like a reasonable thing to do given the growing evidence of the incapacity of the politicians to solve the problems created by their needing to court media popularity in their attempts to get elected.

If the good Lord does the thorough job that can be expected of him then it will not only be the British who will benefit but Australia as well.

so all the Australian capitals (I think Bris came in at 21 and in absolute scores isn’t far off the others) are all pretty great places to live, yet to read most media here you’d get the impression that we’re all stuffed.

Richard the catchy headline isn’t justified by your report. Your analysis of the ABS statistics fails to remind readers who may not be familiar with the ABS definition of “unemployed” or methods of calculating “unemployment”.

The ABS does not count the numbers of people in receipt of Centrelink payments, often there are double the number of Centrelink recipients than a 5% unemployment rate would indicate. Instead the ABS surveys a carefully selected sample of Australians by telephone in the first week of the month. Respondents remain in the survey for 12 months.

Since the 1990s economists have routinely assumed the real unemployment rate is about triple the ABS publicised figure. When Costello gloated that Australia had lower unemployment that Germany he nearly bought down the house of cards as people were reminded that Germany defines unemployment as less than 15 hours of paid work a week, as opposed to Australia’s 1 hour paid or unpaid work.

Clearly the cost of living – and particularly the affordability of housing – is not a major factor.

Also, no Zurich anywhere on the list ? Hard to take it seriously without that.