The government memo left behind. On the Craig Thomson affair: “He is a dedicated local member, working hard for the people of Dobell.” On the grounded plane on Christmas Island: “This is a prudent arrangements that achieves value-for-money for taxpayer dollar expenditure.” On the situation in Libya: “It is clear that the end of the […]

The government memo left behind. On the Craig Thomson affair: “He is a dedicated local member, working hard for the people of Dobell.” On the grounded plane on Christmas Island: “This is a prudent arrangements that achieves value-for-money for taxpayer dollar expenditure.” On the situation in Libya: “It is clear that the end of the Gaddafi regime is very near.” On a possible Qantas takeover: “It would be inappropriate to comment on what appears to be little more than market speculation.” On Bob Katter’s gay brother: “That’s a matter for the Katters.” 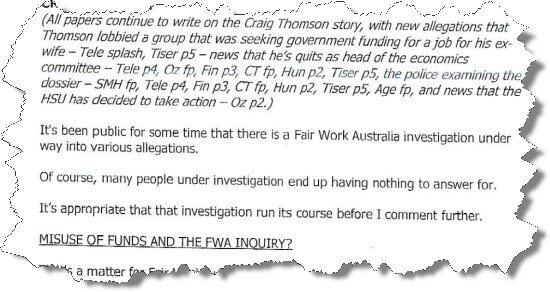 They’re just some of the talking points in the government memo foolishly left behind by one member yesterday. It’s everything you already knew about politicians — in document form. Read the PDF copy here.

The union heavy not amused. Union flacks gathered yesterday for the ACTU’s annual Media and Communications Conference. But apparently entertainer (and ex-Chaser) Charles Firth’s address didn’t go down too well with one high-profile union official. We’re checking our sources …

Taxing debate on staff pay. Many federal public service employees, as we flagged yesterday, have rejected the 9% pay offer to departmental staff — including the Australian Tax Office. But dissent seems to have been shut down in the internal rag, according to one spy: “The Tax Office has an internal office magazine called News Extra where staff can express their opinions via letters to the editor. For a few months, staff have expressed their views regarding the pay offer in letters to the editor.  Because these letters do not normally agree with the management view, they have banned letters on the pay offer. This seems to be an attempt by management to minimise dissent.”

The four corners of News saga. So what is Four Corners going to come up with on Monday night in its investigation of the News International phone hacking scandal? Acclaimed reporter Sarah Ferguson has been ferreting around the company for weeks. And the ABC’s presser yesterday was unusually revealing: “Four Corners has been told by a News insider that the practice of phone hacking and the gathering of illegal information was so widely accepted that at the News of the World competing sections of the paper used different private investigators to do their dirty work.” The proof? We’ll be watching …

Oils ain’t oils in supermarkets. Did you know most eucalyptus oil doesn’t actually come from eucalyptus trees but is modified camphor oil? No, neither did we. And as one insider writes: “Eucalyptus oil claimed to be BP (British Pharmacopoeia) standard must be distilled from the leaves of eucalyptus trees. One local pharmaceutical supplier of ‘house brand’ eucalyptus oil to major supermarket chains has been caught out after its Chinese sourced “100% pure BP quality eucalyptus oil” was found to be a strange blend of other non-eucalyptus oil.” Will it and the supermarkets do the right thing and withdraw the product?

Fingerprint conspiracy in Malaysia. Some more context for the High Court ahead of next week’s decision on the federal government’s Malaysia Solution. Yesterday online news site MalaysiaToday reported:

The Malaysia United Nations High Commissioner for Refugees (UNHCR) is accused of betraying refugees by conspiring with Putrajaya Immigration Office to take their fingerprints and send them back to their own countries, it has been claimed.

“I arrived at the immigration office in the morning and was made to queue up. Then when my turn came, I had my fingerprints and a photo taken. And then I was given a printed document written in Malay that said to go back to our own country,” said Shwe Zin.

Many registered refugees came to the immigration office to give their fingerprints but did not know the details of what was going on, she added.

Excuse me, Mr Ambassador. Our tip yesterday on air marshals — we’re still investigating — prompted one reader to reminisce about her own airport security scare:

“The day after they ‘got’ Bin Laden I was flying out of Canberra and going through security I recognised the face of the guy behind me (as you often do in Canberra) he smiled at me while I racked my brains to remember his name/identity when two burly guys pushed up close behind and the security alarm screamed a deafening sound. The airport security guard took a step forward and the two burly guys flashed their warrants (federal police probably) and then the penny dropped about  the guy in front — the American ambassador, who at that point would have been a prime target.”

Puzzle over crossword match. And from the 3AW Rumour File: “Double Crossed says he purchased two $5 crossword scratchies a week apart and they were identical in the words you scratch out. He says the powers that be say that the chances of that happening are impossible.” Apparently not.

I don’t know what’s more disturbing; that the government thinks MPs need this sort of ‘talking points’ memo, or that they actually do need it.

Thanks for publishing the ALP spin sheet, that is emailed to all Labor MP and ‘spokesperson’ hack each morning or more often when a crisis is happening.

You want to talk about a voluntary tax on stupidity? Scratchies. They make pokies look generous. Purchasing the first one I can understand, but if that doesn’t warn you off the second one you deserve to lose your $5.