There will be red faces among Channel Ten's website team this morning as their home page displayed a big plug to Ten's Sunday morning rant The Bolt Report, with the presenter "Michael Bolt". Ahem?

Meet Michael Bolt. There will be red faces among Channel Ten’s website team this morning as their home page displayed a big plug to Ten’s Sunday morning rant The Bolt Report. The problem was that one link directed readers to information “About Michael Bolt” — who is clearly not the show’s presenter and namesake, Andrew Bolt. For the record, Michael Bolt was a fearsome premiership captain for NRL club the Illawarra Steelers. 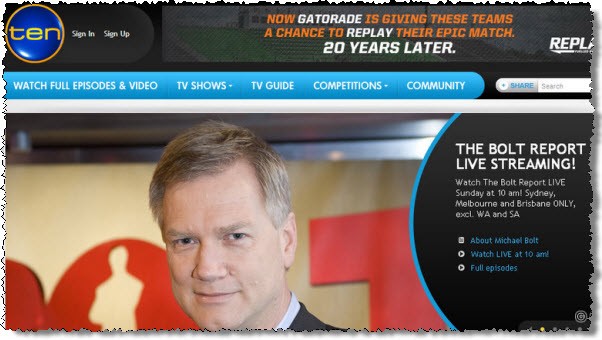 Front page of the day. Apple’s headquarters are located in Cupertino, California, between San Jose and San Fransisco. The company provides countless jobs and revenue to the area. News of Apple CEO Steve Jobs stepping down has the San Francisco Chronicle asking: “What Now?” … 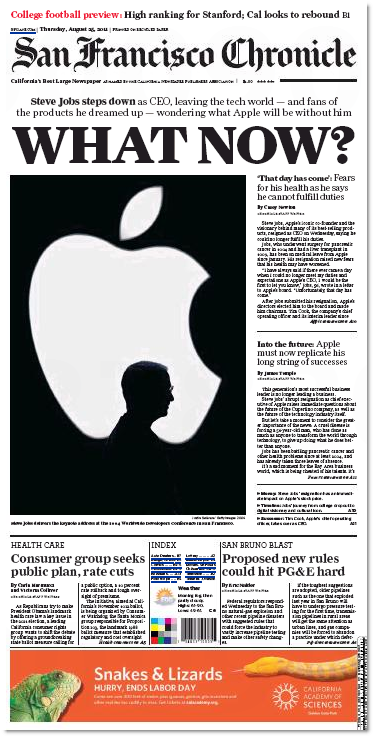 “Two journalists and a producer at Channel Nine Brisbane have been fired over the faking of news footage, while the station’s news director has quit over the scandal.” — Media Spy

“A leading lawmaker examining the country’s phone hacking scandal called Wednesday on Rupert Murdoch’s news empire to confirm whether it is paying the legal fees of the ex-editor of the News of The World.” — Huffington Post

“Drop The Dead Donkey writer Guy Jenkin is creating a TV comedy about newspaper phone hacking for Channel 4. The hour-long programme will take a ‘satirical swipe’ at the scandal when it is screened later this year.” — The Guardian

Slate lays off staff … does the model still make sense?

“Slate, one of the original internet-only magazines, has laid off four journalists, including someone whose words I often quote in this column, press critic Jack Shafer.” — Forbes

How Jobs has changed (but not saved) journalism

“Steve Jobs resigned Wednesday as CEO of Apple Inc., but his legacy will be felt in the news industry for years to come. In the past five years, Jobs’ Apple has simultaneously disrupted, transformed and aided the news industry.” — Poynter

“Once the stuff of science fiction and high-tech crime fighting, facial recognition technology has become one of the newest tools in marketing, even though privacy concerns abound.” — Los Angeles Times

“By all reports, Amazon is on the verge of releasing its first tablet. While there have been some wild theories like a hybrid eInk/color touchscreen display, we’re going to be a bit more realistic.” — Business Insider

Has anybody else noticed that it would appear that Bolt is on the nose with a number of other Ten On Air personalities who never seem to miss the chance to use him as the butt of their jokes, the latest being on “Talkin’ bout my Generation”.

Dammit, I was expecting his gay brother had come out against him!!

He might just be able to cope with gay but what if his hypothetical brother was a communist? Woo hoo.

So what if that helicopter wasn’t in the air at that time of night – it was dark – what could you see?
What sort of precedent does this set – “every journo that’s ever fudged a story will be sacked”? “The Skase Chase” (in Majorca) springs to mind, for a start – “Limited News” aside of course!