How the world’s newspapers covered Libya. Here’s the front pages of nearly 40 countries’ newspapers over the past 24 hours (click here or on the image to enlarge): 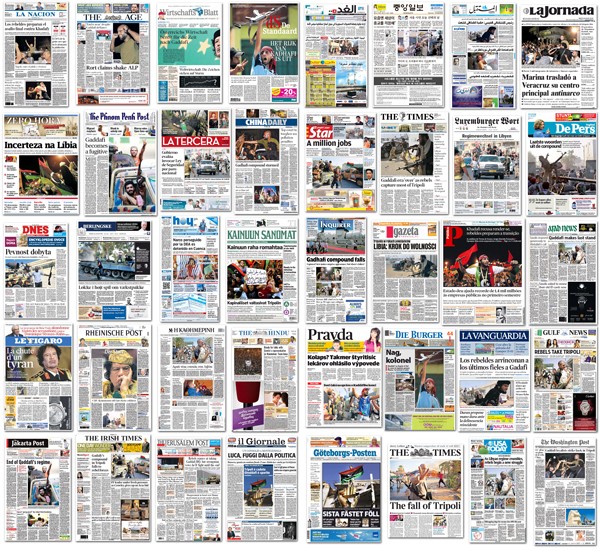 Front page of the day. Jack Layton, the respected Canadian opposition leader died of prostate cancer on August 22. Layton, leader of the New Democratic Party from 2003 to 2011, wrote an open letter two days before he died, which included the line: 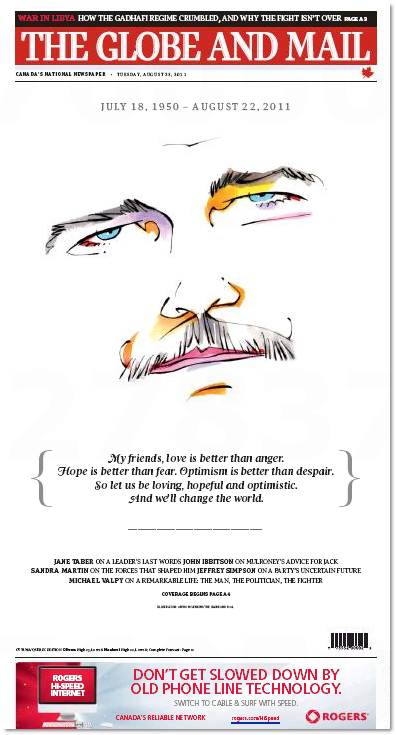 Bad Gaddafi headline of the day. In the rolling Libya coverage there’s bound to be a few shockers that get through. Today’s nomination comes from the UK Daily Mirror‘s front page. Have you seen a bad (or good) Gaddafi/Libya headline pun? Send ’em through to [email protected]. 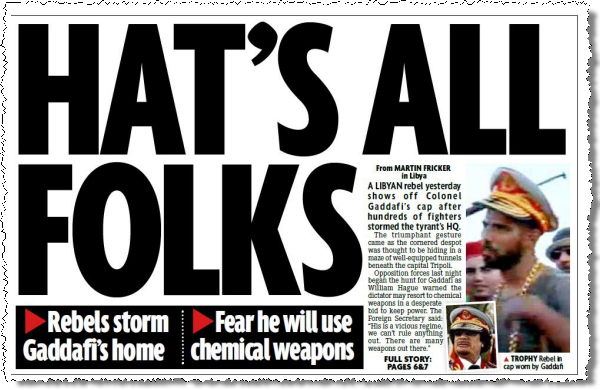 Andy Coulson’s payout: a problem for the Tories?

“Andy Coulson was just a little too indiscreet, telling a handful of colleagues at Conservative campaign headquarters that he was still receiving substantial severance payments from News International months after he joined as David Cameron’s aide and the party’s director of communications in May 2007. His new salary was reported to be £275,000.” — The Guardian

“The Electoral Commission has been asked to investigate claims that Andy Coulson, former editor of the News of the World, broke the law by receiving pay and benefits from the tabloid’s publisher while he was David Cameron’s director of communications.” — journalism.co.uk

“Analysts from Needham & Co have downgraded their recommendation for News Corp from a buy to a hold on the grounds that “powerful enemies” of Murdoch are intent on using the phone-hacking scandal to bring him low.” — Forbes

“Seek chief executive Andrew Bassat remains confident the employment and education company can continue to grow its share of the job advertising market at the expense of Fairfax Media and News Limited.” — The Australian

“Started in 1883 as Inland Printer, Penton Media’s American Printer magazine will be stopping production after 128 years. The August 2011 edition has been the last title published.” — Folio

“An anonymous blogger known only as S.H. has been posting detailed daily descriptions of the robot-based disaster response effort at Fukushima. In early July, however, the blog was discontinued and later deleted altogether. So when it disappeared, IEEE Spectrum took it upon themselves not only to save a cached version of the blog, but to translate it and republish it. It’s a powerful demonstration of the durability of internet-based media — and an interesting read in its own right.” — TechCrunch