Having police determine whether a criminal offence has occurred over the use of a credit card in the name of Federal Labor MP Craig Thomson is a frightening prospect.

Normal assessment and investigation. The short statement by NSW police this morning that  a letter from federal shadow attorney-general George Brandis has been referred for “internal assessment” will increase the anxiety federal Labor is feeling about its future.

Having police determine whether a criminal offence has occurred over the use of a credit card in the name of Federal Labor MP Craig Thomson is a frightening prospect. At the very least it will continue the impression reflected in all the opinion polls that this government can do nothing right.

Protection for everybody. This morning it seems like the old times prevalent when I entered Canberra journalism 40 years ago with newspapers featuring stories advocating protection for everybody. Steel makers with their hands out for government help. Apple growers complaining about competition. And the National Party still at the forefront of helping the rent seekers.

A cagey answer. The anonymous News Limited spokesman quoted b y the ABC as refuting allegations by Ita Buttrose that Rupert Murdoch wanted her to have a person followed as part of an investigation for a story he wanted run in the Sydney Tele is a cagey fellow. While the words in the denial give the impression that Ms Buttrose was telling fibs about his boss they really don’t do so at all.

In Monday night’s Australian Story, Ms Buttrose said the media mogul asked her to “go beyond what I thought I should do” when he asked for someone to be  followed while chasing a story in her time as editor-in-chief of the Sunday Telegraph and Daily Telegraph. Ms Buttrose said the request came while working on a story at Mr Murdoch’s request.

“I assigned a reporter to do it but [Mr Murdoch] wasn’t happy with the result and said, ‘No, that wasn’t good enough. Have you followed this person?’.” Approaching then News Limited chief executive Ken Cowley, Ms Buttrose claims she said: “I can’t give this instruction. I’m not having anybody that works for me, for whom I’m responsible, follow anybody. I don’t want to be a part of it.”

So to the denial.

“Mr Murdoch has never asked any journalist to do anything improper,” the spokesman said.

Well I supposed you can argue that there is nothing improper about having someone followed.

Ms Buttrose did not say that Mr Cowley was asked by Mr Murdoch to conduct surveillance. That denial is of something not alleged.

Those damn baby boomers are to blame! Worried that your retirement nest egg isn’t growing as fast as you expected? Concerned that things might not get better? Well a publication this week by the US San Francisco Fed Boomer Retirement: Headwinds for U.S. Equity Markets? suggests that there are good reasons for concern.

The paper summarises its argument thus:

Historical data indicate a strong relationship between the age distribution of the U.S. population and stock market performance. A key demographic trend is the aging of the baby boom generation. As they reach retirement age, they are likely to shift from buying stocks to selling their equity holdings to finance retirement. Statistical models suggest that this shift could be a factor holding down equity valuations over the next two decades.

The Fed economic boffins project what will happen to price earnings ratios: 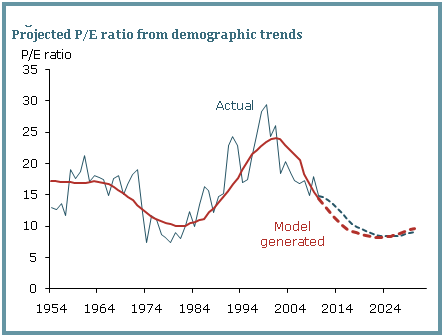 The model-generated path for real stock prices implied by demographic trends is quite bearish. Real stock prices follow a downward trend until 2021, cumulatively declining about 13% relative to 2010. The subsequent recovery is quite slow. Indeed, real stock prices are not expected to return to their 2010 level until 2027. On the brighter side, as the M/O ratio rebounds in 2025, we should expect a strong stock price recovery. By 2030, our calculations suggest that the real value of equities will be about 20% higher than in 2010.

Breaking! Libyan rebel flag flies over embassy in Canberra … For the last two weeks, as Crikey intern Clare O’Meara reports: The Libyan embassy in Canberra has confirmed to Crikey that they have been flying the Libyan rebel flag for more than two weeks now. While there has been much reporting of this momentous event occurring elsewhere in the world, (Ankara, Algeria, Cairo, Malta, Belarus, Minsk, Bulgaria, Prague, etc), the change of flag seems to have gone largely unnoticed in Australia.

This footage from March of this year shows rebel supporters raising the flag of independence in peaceful demonstration. The flag was quickly replaced with the Libyan national flag, as the Libyan ambassador to Australia told Lateline that he would continue to function as a representative of the regime. However, since the initial unrest in February, the cultural counsellor at the Canberra embassy said he had severed ties with the Gaddafi regime and was acting on behalf of the Libyan people.

I wonder if this will force Fairfax to release the rest of the information they have on the Thomson alleged incidents, or drip feed them or hold off?

What sort of drop kick, in this country, insinuates Ita is lying? Are they that stupid?…ahh.

“Having police determine whether a criminal offence has occurred …”. Fortunately, and despite the best efforts of many, we still have courts for that.