Rinehart’s life an open book? Australia’s richest person Gina Rinehart could have a very private life exposed by a new biography penned by a leading business journalist, we’re told. We’re investigating … Statement on how to get ‘grinf-cked’. Here’s the Statement of Claim in Bra chief Sally Berkeley’s $9 million unfair dismissal case against hulking […]

Statement on how to get ‘grinf-cked’. Here’s the Statement of Claim in Bra chief Sally Berkeley’s $9 million unfair dismissal case against hulking Pacific Brands boss Ross Taylor. Highlights include Taylor’s amazing “don’t grinf-ck me” line at paragraph 47 and the punitive damages section at paragraph 177. According to the Urban Dictionary, “to grinf-ck” is to “screw someone over all the while they believe you are their friend”, although there’s also another, unpublishable usage. The case is being run by Harmers Workplace who emerged triumphant in the Kristy Fraser-Kirk DJs sexual harassment brouhaha. Pacific Brands and Taylor deny the allegations.

Stuckey in the middle of tourism. Jann Stuckey, state MP for the Gold Coast seat of Currumbin, is apparently creating quite a stir in the normally laid-back local tourism sector. Stuckey, the shadow tourism spokesperson, has made her attacks on government tourism policy so effective that independent industry chiefs are worried her criticisms might actually be adding to a drop in Coast visitor numbers. We hear a normally friendly senior industry rep has phoned to ask her to tone down the rhetoric. “The phone call was not well received,” our tipster reports.

No confidence in Qantas. Qantas engineers are appealing to shareholders for a no-confidence vote in the CEO and the board, the Australian Licensed Aircraft Engineers Association reports.

Journalism school offline? Melbourne’s leading journalism school at RMIT has apparently announced it will halve its radio and television reporting courses. From next year, practical live-to-air radio and television courses will only be offered in one semester, dean of the School of Media and Communication, Professor Stephanie Donald, has told local media. On top of that, five lecturers took voluntary redundancies earlier this year. “The program changes are a blow for prospective journalism students, who are told by industry and careers advisers that their future lies in online journalism, and they must be multiskilled and be capable of producing audio and video journalism content,” says one insider. “RMIT journalism appears set to follow lesser schools and teach only print journalism — as it did 20 years ago.”

Costello mounting comeback! Thanks to the Crikey reader who pointed to the appearance last week of ex-treasurer Peter Costello on Fox Business in the US. Costello was giving advice to America on recovering from a credit downgrade, as Australia did under Costello’s watch against media opposition:

“The media in Australia tends to be pretty left and always approaches issues from a left-wing perspective so we didn’t have much media support as we were putting that together. It was fighting against the media as much as anything else.” 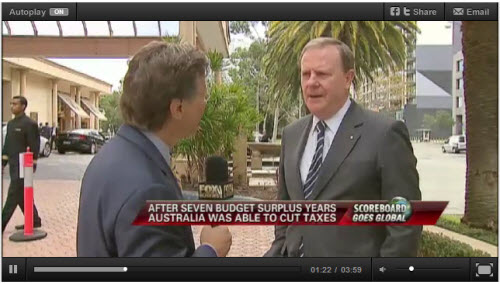 But the more amusing aspect of the interview with Australia’s “former finance minister” was the conclusion from inquisitor David Asman that Costello “may be running for prime minister eventually in Australia, so he may eventually be the leader of the country”. Does the Fox host know something we don’t?

Are Fairfax journos being paid in gift cards for writing ads?

The Media in Australia is Left leaning??? Where in Australia was Costello living when that was the case? Strange statement from a pompous, egotistical, ‘I am the greatest’ politician who can still fabricate with wit and enthusiasm.