Who’s attacking whom? Crikey received this tip over the weekend: “There was a riot at the Northern Immigration Detention Centre in Darwin Thursday night/Friday morning. There are rumours Serco staff beat up some detainees and 50 or so detainees retaliated.” The Darwin Asylum Seeker Support and Advocacy Network (DASSAN) also sent out a press release […]

Who’s attacking whom? Crikey received this tip over the weekend: “There was a riot at the Northern Immigration Detention Centre in Darwin Thursday night/Friday morning. There are rumours Serco staff beat up some detainees and 50 or so detainees retaliated.”

The Darwin Asylum Seeker Support and Advocacy Network (DASSAN) also sent out a press release alleging that three male asylum seekers “have been the victims of an unprovoked attack early on Friday morning” by Serco staff, the organisation managing the centre.

“One of the men provided details of his assault to DASSAN. ‘Two Serco staff members,’ he said, ‘covered us and the rest others twist from leg, twist my hands and push down the floor. A male supervisor stepped on my stomach and stepped again on my cheek with his knee, while another one strangle from my throat.’ All men suffered injuries as a result of the alleged assaults.”

We spoke to chief DIAC spinner Sandi Logan about the issue, who told Crikey “On this query, there was certainty no riot. Whoever is suggesting that is wrong”. Logan noted that two arrests had been made at the centre. But it was detainees not Serco staff that were charged with assault. As the ABC reported yesterday:

“Australian Federal Police have arrested and charged two men with assault after a worker was injured at Darwin’s immigration detention centre on Friday morning. A number of staff working at the centre were injured during the incident, including one worker who was taken to hospital.”

“Now that the police has laid charges any speculation about what did or do not occur is sub judice … hence we won’t speculate about what’s happening and that’s before the courts,” said Logan. Stay tuned …

New Inventors gets teary, will it make the cut? Crikey received this tip about the taping of the final episode of the ABC’s New Inventors:

“The winner of this year’s New Inventors prize used his winning speech to ask the ABC to support science, design, and Australian ingenuity and not sack the show.  Will this make it to air, or will management insist on censorship?”

Sources close to the program confirmed that the winner did indeed mount a passionate plea for the axed show to stick around, so passionate that he teared up at one point. No word on whether the speech will make the final cut, although the winner’s words have always aired in previous season finales. Stay tuned for the final program this Wednesday at 8pm, where all will be revealed …

A lack of common census. Crikey has heard a few complaints about questions on the census forms relating to relationships. Like, why is the marital status question so demeaning for singles or those in de facto relationships? The only option they had was to tick to “never married”. One tipster said she found it frustrating to tick “never married”, since marriage isn’t actually something she is aiming for in life. Another told Crikey that he was at a dinner party on census night and filled out the form in a group. Although he lives with his de facto male partner (who was also at the dinner party) as neither of them were ‘Person 1’ on the form, they never got a chance to say they were in a de facto relationship with each other. “How are they supposed to know how many gay couples there are if we don’t get to tell them?” he asked.

FMK not JFK, WTF? Paul Freebody, the LNP candidate for Cairns who has stepped aside while his party investigates an email in which he expresses a hope the Prime Minister Julia Gillard “follows the history” of assassinated US President John F Kennedy has form, according to our tipster:

“Last year when his plans for a water theme park (on the Cairns’ floodplain doh!) were initially rejected he went on radio to hysterically denounce ‘the witches and bitches’ on Cairns Regional Council.”

Our tipster theorises that Freebody may have been inflamed by “his electoral defeat at the last council election by a 21-year-old female law student. But one does have to question the LNP’s ability to choose suitable candidates when they can endorse a drop-kick like this for what is a winnable seat.”

According to The Cairns Post, on Friday, after voluntarily standing aside from his candidacy, Freebody said the email had been doctored, and he had actually written the initials “KMR”, referring to Kevin Rudd, not “JFK”. Creative photoshopping, a slip of the keyboard or a deeply inappropriate statement from an aspiring LNP candidate? Can Do Campbell is reserving comment until judgment day …

Recommended reading.  This just in from Senator Ian McDonald’s office. It seems the Senator is doubling as an aggregator for his constituents in his spare time, today’s recommended reading comes from the “wall steet Journal” (presumably an imprint of the respected Wall Street Journal.): 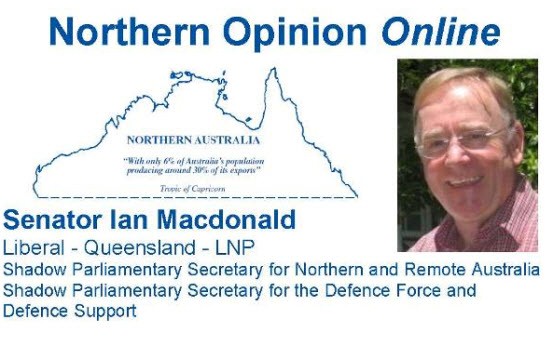 I guess you don’t get the respected “wall steet Journal” every morning so you may have missed the following article showing how Americas leading business newspaper views the Carbon Tax Debate.  Sadly for Julia she wont be able to muzzle or threaten this newspaper.

As always, please let me know if you have any feedback

As our tipster writes, “Clearly written by someone with a deep and objective understanding of the proposed Australian carbon tax policy — especially how it will increase our petrol prices by 9% …”

A pain in the arts One clearly disgruntled arts insider wants to know how the priorities of the federal government in its National Cultural Policy Discussion Paper, i.e. to “strengthen the role that arts play in telling Australian stories both here and overseas”, can be reconciled with the fact “that Australian taxpayers are heavily subsidising Baz Luhrman’s film adaptation of the American classic The Great Gatsby or Alex Proyas’ adaptation of Milton’s Paradise Lost, written by veteran American Lawrence Kasdan and starring American Bradley Cooper”? Meanwhile …

“… the Assistant Treasurer Bill Shorten is about to take to parliament amendments to the Producer Offset for film and television there has been no attempt as part of this package to redefine and limit what an Australian production actually is. Meanwhile Screen Australia, the governments film and TV subsidy agency is challenging the decision of the AAT that Lush House, a can do series about house cleaning, is a documentary under the Tax Act and appealing to the Federal Court. Wouldn’t all this flag to Mr Crean that rather than vague objectives of cultural policy it may be wiser to define first what areas of the arts require cultural subsidy and what doesn’t and for what reasons. Perhaps Treasury should be asking him.”

Bush telegraph FAIL “428 businesses and homes in Bundanoon in the southern highlands of NSW have been without the internet since Friday night,” reports a very unhappy camper. “Forty eight hours and counting to fix an ADSL panel in a telephone exchange,” according to Telstra. But who gives a toss on the weekend about a rural village where 428 small businesses, offices, studios, home offices, homes, students doing HSC trials and the community itself rely on broadband seven days a week?” Roll on, NBN?

Christmas Island a ‘ghetto’, but ‘dire’ Curtin could be worse

“Limited News”?
Who owns the “wall street Journal”? The same PR company as does “The Oz”?