A black hole to trouble. The Age reports some interesting scientific news about the nature of black holes:

“They found it in the form of a bright flare — a sign of a star being ripped apart by a supermassive black hole — in a galaxy some 500 million light years away.”

Amazing stuff, and of course it’d be great to be able show people what this amazing event looked like wouldn’t it? 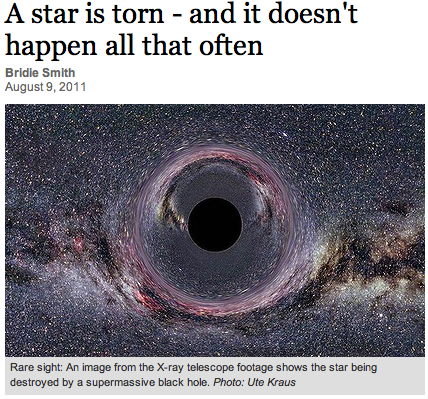 Just one little problem: that’s not an image from the recent X-ray telescope footage, it’s from a simulation from 2004. Whoops. While it’s nice The Age gave a photo credit to the creator, it’d be nicer if it accurately described what it is, rather than trying to pass it off as being connected to the story. The image shows up quite regularly around the internet on articles about black holes, so it’s not surprising that one of our readers quickly noticed The Age’s furphy. — Dave Gaukroger of Pure Poison

Fairfax wants bloggers. Want to work your guts out for Fairfax for next to nix? Well have we got an opportunity for you: its northern online masthead Brisbane Times is seeking “energetic, self-starting, creative” types to blog on fashion, stage and screen and the glamorous local social scene. “As a brisbanetimes.com.au blogger you will provide rolling coverage of your specialist field, using social media to help cultivate a loyal following,” an ad on its website states

There’s a “small writer’s fee”, the ad says, but more than that: “…you’ll have the opportunity to launch your career in media, pitching story ideas, attending VIP events and developing your profile.” Apply within.

Gloomy stars of the financial collapse. Well, not really stars. But at least one Australian trader, Rudalf Oultz, has his “concerned trader face” appear in both The Australian and the Washington Post! 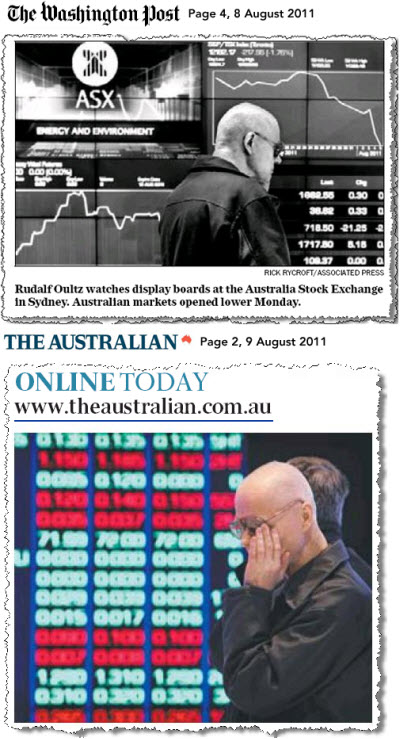 Front page of the day. Yesterday, it was “London Burning”, today it’s “Anarchy”: 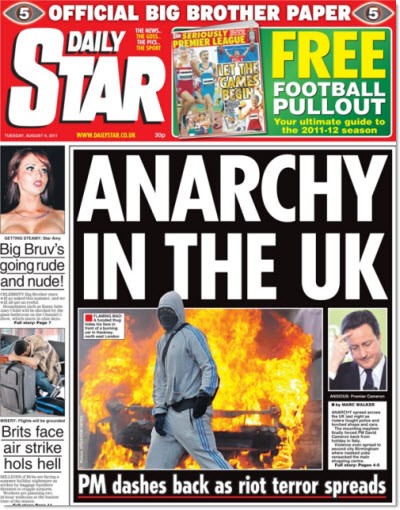 What journos need to know about libelous tweets

“There are a lot of misconceptions about whether tweets are libelous. It’s easy to think, for instance, that Twitter is ephemeral and that libel laws wouldn’t apply.” — Poynter

“The government and opposition yesterday rejected former ABC managing director David Hill’s call for a review of the public broadcaster, saying his concerns could be dealt with by the convergence review. ” — The Australian

Why Huffpo would be better off without AOL

“Back in February, Arianna Huffington said that selling her company to AOL was like ‘stepping off a fast-moving train and onto a supersonic jet.’ In terms of creating value for shareholders, however, it’s been more like stepping onto an airport people-mover — in the wrong direction.” — Forbes

‘E-paper’ makes big promises, but is it really useful?

“A new display technology called i2R e-paper is making the rounds today. It’s developed by ITRI, a Taiwanese research company that has produced flexible AMOLED and LCD displays in the past. i2R is essentially a plastic substrate with a heat-activated liquid crystal coating: you pass it through a thermal printer and a 300dpi monochrome image is impressed on its surface — until you want to rewrite it, which you can do up to 260 times by their calculations.” — TechCrunch

The Washington Star, gone, but not forgotten

“Given the handwringing about the fate of newspapers (and the federal government) today, it is worth a moment’s reflection on a late, great afternoon newspaper in our nation’s Capitol that died thirty years ago, on August 7, 1981. After 128 years — much of that time as the dominant paper of record in Washington, DC — The Washington Star ceased publication and filed for bankruptcy.” — Columbia Journalism Review

I read the article in the ‘Age’ this morning, about the star being ripped apart by a black hole, and not for a moment did I think that the image of a black hole was actually real, the black hole being over 600 million light years away (Andromeda Galaxy in comparison is just 2.5 million light years away), even with gravitational lending producing an ‘Einstein’s Telescope’. One thing that did have me bemused was the final comment that researchers were able to measure the temperature of the black hole, an indication of its mass, without actually mentioning it. My question is ‘how?’. Does anyone know the answer? Black holes of any size are the coldest objects in the Universe, a minuscule amount above absolute zero, much colder than the temperature of the cosmic microwave background of around 2.7K. So how would you be able to measure a minisule cold point against a warmer background? I don’t feel motivated enough to look for the answer…

“Want to work your guts out for Fairfax for next to nix? Well have we got an opportunity for you: its northern online masthead Brisbane Times is seeking “energetic, self-starting, creative” types to blog”

Crikey used to pay its bloggers “a small writer’s fee”…now (I think) Crikey pays them nothing at all…
and your writers get $100 or so per piece, correct?