After an investigation by the Australian Competition and Consumer Commission, pay TV and internet provider AUSTAR admitted "its contracts were likely to mislead consumers and breach Australian Consumer Law." Plus other media news of the day.

Fairfax hiring: lead The Age. Want Don Churchill’s job leading Fairfax in Melbourne? Good bloody luck. But for the masochists among you …

Applications are open for the role of Melbourne Publisher

The Melbourne Publisher is responsible for the overall leadership, management and daily operations of The Age, The Sunday Age and Community Newspapers Vic reporting to the CEO Metro Media.

This role is responsible for implementation and delivery of the Metro Media strategy across the Melbourne Publishing Group.

The team reporting to this key role is the COO, The Editor and Chief and Circulation & Newspaper Sales Manager.

The successful applicant will have:

For further details or if you wish to express an interest in the role please contact Kelly Young [email protected] or 9282 2753.

Applications close for this position on Friday August 12

“AUSTAR offered extra packages of channels (such as movies or sport) for free or at a discounted rate for a short introductory period at the beginning of a minimum-term contract on top of its standard ‘Starter Pack’. AUSTAR’s sales contracts represented the total minimum cost as that calculated based on the cost of the ‘Starter Pack’ for 12 months without reflecting the fact that the customer would be charged for the extra channels at the end of the introductory period unless the customer actively sought to remove the channels from their package.”

Following the ACCC investigation, AUSTAR will now show the minimum price of the whole contract on its documentation, calculate the total minimum cost of a contract based on the assumption that customers will keep all channels offered in the introductory period and record telephone conversations when contracts are discussed with customers.

Front page of the day. Not much happy news being reported in The Washington Post … 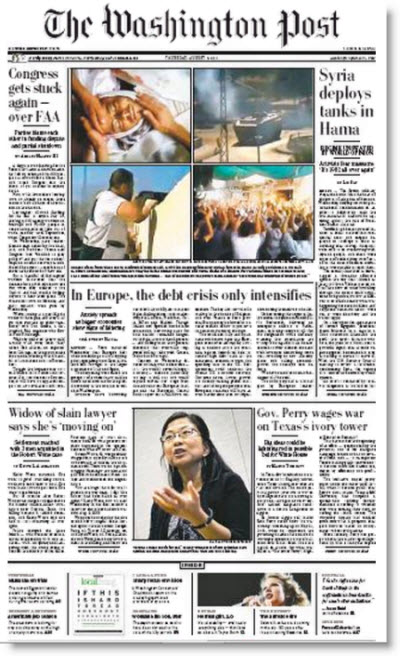 Why a judge let a reporter protect their source

“A federal court on Wednesday unsealed a judge’s opinion from last week explaining why she had issued an order on July 29 largely quashing a subpoena to the writer of a book on the Central Intelligence Agency… ‘A criminal trial subpoena is not a free pass for the government to rifle through a reporter’s notebook,’ wrote the judge, Leonie Brinkema of the United State District Court in Alexandria, Va.” — New York Times

“Today The Huffington Post launched its newest vertical — BlackVoices. The site, according to Arianna Huffington, is designed to showcase the black person’s perspective on everything, big to small.” — Fishbowl NY

“SBS ONE will add an Al Jazeera English news bulletin from next week.” — TV Tonight

“In an eyebrow-raising trademark battle, Facebook filed suit against adult dating site Shagbook in May. Facebook’s contention: that the world’s largest social network would be ‘damaged by the issuance of a registration for the mark Shagbook.’ Shagbook has now filed its own opposition, along with counterclaims, with the United States Patent and Trademark Office.” — Mashable

“Journalistic ethics is ordinarily a head-nodding, Sunday-sermon kind of subject. Unless a community website names a teenager who died of a drug overdose in what was a string of Oxycontin fatalities among local youths…or publishes a “news” story about a business that’s a regular advertiser or is being avidly sought … or takes sides on a divisive civic issue.

“They’re all situations that real-life hyperlocal editors have been in recently, and highlight a dilemma of new media — the old rules of journalism ethics often don’t offer clear directions.” — Street Fight

“Cinema advertising has the most to lose in shifting adspend patterns while online, mobile and social media are likely to be the winners, a survey by Roy Morgan research suggests.” — mUmBRELLA

Just another day in the lovely land of corporate australia where the sharks prey on the minnows and nobody does anything about it until it’s too late.