More gravely serious truths about the severity of the Fukushima nuclear power plant disaster following the earthquake and tsunami of March 11 have emerged.

More gravely serious truths about the severity of the Fukushima nuclear power plant disaster following the earthquake and tsunami of March 11 have emerged.

Two things are now clear and they justify the following charges: the nuclear experts that the Australian media relied upon should never be trusted again; and social media real-time raw and unfiltered audio and video reports are providing a more truthful and relevant coverage of the aftermath of the continuing nuclear crisis than the selective and filtered copy being carried by print and wire agencies.

While the Bloomberg news report overnight of two extremely high radiation readings being recorded at the Fukushima complex of nuclear plants on August 1 and August 2 are alarming, other significant disclosures are also made in this story.

It took TEPCO and nuclear apologists until last month to even concede that “partial meltdowns” had occurred in up to three of the reactors, even though the only plausible explanation for the caesium contamination detected outside the reactors within 48 hours was the rupturing of the caesium sheaths surrounding the uranium rods upon their exposure to air following the draining of coolant fluid, setting up the requirements for a melt down to occur.

In what would be consistent with a deliberate policy of gradually revealing the truth some months after the event, the Japanese nuclear authorities and government are also now routinely referring to the fact that contamination levels outside the exclusion zone around the Fukushima Daiichi complex include hot spots that are as highly affected as they were around the Chernobyl reactor that exploded in the former Soviet Union 25 years ago.

Which is where social media in Japan is making itself felt.

In a series of widely viewed and replicated YouTube videos a Japan nuclear expert, Professor Tatsuhiko Kodama, has told Japan’s lower house Diet that the nation has failed miserably to make a timely evacuation of the at risk population worst affected by Fukushima radioactive fallout compared to the massive relocation that occurred in the Ukraine in the two weeks after the Chernobyl disaster. 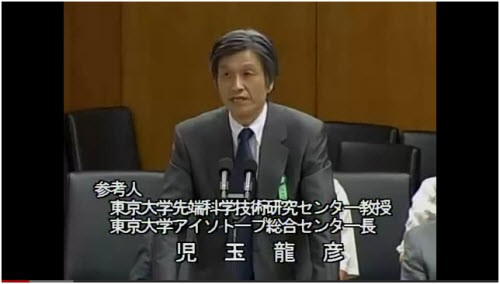 In the English language transcripts of these videos, notably on the Penn-Olsen Asia tech blog, Kodama says he is shaking with anger at the incompetence and dishonesty of the government and nuclear authorities and the TEPCO power company in the aftermath of the accident. He attacks the use of simplistic readings that ignore for example the accumulation of deadly isotopes at the foot of slippery slides in children’s playgrounds in favour of readings at the top from which rain has washed away the contamination.

The readings, like the children, are being cooked, either by ignorance or intent.

Kodama says the uranium equivalent of the contamination released by the three affected reactor cores and four cooling ponds at Fukushima was that of 20 Hiroshima-sized atom bombs:

“In other words, we should recognise from the start that just like Chernobyl, Fukushima I Nuclear Plant has released radioactive materials equivalent in the amount to tens of nuclear bombs, and the resulting contamination is far worse than the contamination by a nuclear bomb.”

Kodama’s testimony, poorly reported in the established Japan media, is circulating in social media in tandem with raw videos of government officials telling a meeting of Fukushima residents demanding urgent help in evacuating to other parts of the country that they should stay put and trust them to reduce radiation. The meeting becomes increasingly angry after one official tells the residents they could evacuate at “their own risk”, while they shout at them for telling them to stay put and die.

The bigger context to these reports from Japan is that the guidance given by nuclear scientists and apologists alike to the media in Australia was disgracefully inaccurate and patronising. The reality of the caesium contamination was ignored, and the quoting of initial radiation readings in the wrong metric was ignored (and later found to be fictitious as well as mischievous, when TEPCO confirmed that it didn’t actually have any capability of measuring contamination within key parts of the complex).

The constant refrain that Fukushima would never be a level-seven disaster such as Chernobyl contained longer in the Australian media than anywhere else, even after the nuclear authorities in France and US broke with the usual protocol of not commenting on other national agencies, and said that it could reach level six or level seven and expressed a lack of confidence in their Japan counterparts.

One thing that is becoming apparent after this disaster is that the truth, like the fallout, is going to force itself on the authorities no matter how much the business, political and scientific establishments try to play it down.

Watch the nuke apologists start to fall over themselves to obfuscate.

It’s possible that the reluctance of officials to facilitate evacuations stemmed from the IAEA finding that far and away the greatest source of casualties arising from Chernobyl was the stress and disruption associated with forced mass evacuations.

Calls for calm from Nuclear proponents in the immediate aftermath of the disaster were, on balance, probably justified.

Until more information was known there was little to gain by hysterical doomsaying.

At this point, however, very little that is positive can be said about the scale of this emergency.

The Japanese government and TEPCO have achieved the unthinkable – they have outdone the cold war era Soviet government in secrecy, callousness and deception.

I await the usual coterie of nuclear apologists reassuring us that such a disaster could never happen with a modern nuclear reactor.

Closely followed by nuclear enthusiasts getting all excited about new prototype thorium reactors, which don’t exist but will supposedly be even safer.

Until they, too, melt down catastrophically, causing hundreds of thousands of deaths and cancers, and untold human misery.

When there is ample evidence that the Nuclear Power Industry cannot function in the modern world without massive government subsidies, due to the high inherent risk of the operation and high costs, why we would even consider continuing with such an outdated technological terror, is beyond me.

Nuclear Power was a bold experiment, but frankly, it has been shown time and again to be just too dangerous.

Any business manager is ultimately in the risk management business. This means ranking the potential worst outcome, against the likelihood of that outcome.

In this case, the potential worst outcome is complete catastrophe on a scale which rivals the most severe adverse events ever experienced by humankind, whether natural or manmade.

The likelihood of this outcome, some would say, is vanishingly small. Chernobyl and Fukushima suggest otherwise, and even if the likelihood is ranked as “Unlikely in the extreme” the risk is still too great due to the phenomenally terrible consequences.

It’s possible. But do you really think that was what drove this coverup?

And all this is now relegated to the status of “world news in brief” at best. All we can do is hope that the truth is somehow closer to TEPCO’s version of events than it unfortunately appears.