Murdoch back to business … the bad review worth £65k …

The News of the World scandal that has embroiled the Murdoch family is almost Shakespearean. Likewise, the writing about the scandal has been, at times, Shakespearean. Except maybe when they get Shakespeare wrong. Plus, other media news.

Front page of the day. The US debt crisis remains and the politics continues to play out in Washington DC … 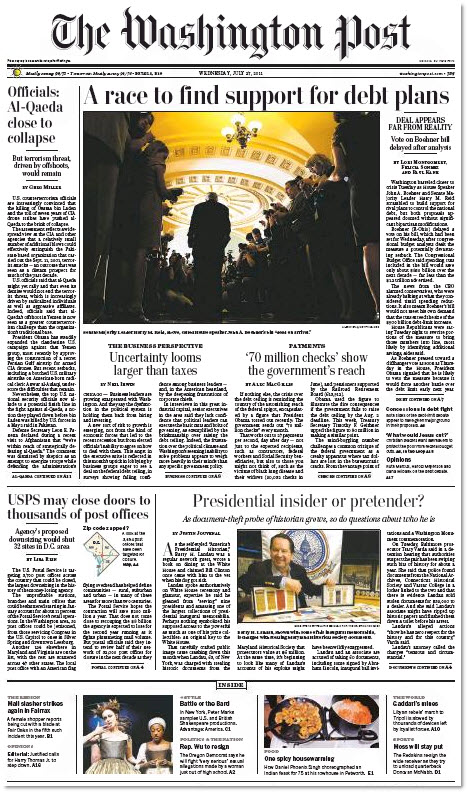 The Department of Corrections. The News of the World scandal that has embroiled the Murdoch family is almost Shakespearean. Likewise, the writing about the scandal has been, at times, Shakespearean. Except maybe when they get Shakespeare wrong. From yesterday’s International Herald Tribune:

Today Media announces it has hired a new Diary columnist. Nick Leys will be joining the Media section after a career at the ABC, Fairfax and News Limited. He returns to The Australian from the Herald Sun where he was a senior reporter and replaces Caroline Overington.” — The Australian

James Murdoch back to chair BSkyB board meeting

“James Murdoch will on Thursday chair a full board meeting of BSkyB for the first time since his family firm dropped its bid for full control of the satellite business. It will be “back to business as usual”, said one non-executive director, almost as if nothing has changed. Except, of course, that almost everything has.” — The Guardian

“The murder of Mexican crime reporter Yolanda Ordaz was not related to her work as a journalist, local authorities have claimed. The body of Ordaz, who worked for regional newspaper Notiver, was discovered yesterday afternoon behind the offices of another local newspaper. She had been missing since Sunday.” — Journalism.co.uk

“An author has won £65,000 in libel damages over a “spiteful” book review that was written by a journalist for a broadsheet newspaper.” — BBC

“A Tasmanian police training video, featuring footage of the bodies of the Port Arthur massacre victims, has been posted online. The footage was removed from YouTube but a copy uploaded by a different user remains on the video-sharing website. It is not clear when the footage was uploaded or taken down.” — The Sydney Morning Herald

“Interns who worked at an NGO and accompanied Johann Hari to the Central African Republic in 2007 dispute allegations made against him in Private Eye, the Times and the Telegraph.” — Liberal Conspiracy