The carbon tax hype is starting to fade

Julia Gillard and Tony Abbott were still on the campaign trail debating the carbon tax, but the media is finally starting to move on...

Julia Gillard and Tony Abbott were still on the campaign trail debating the carbon tax, but the media is finally starting to move on, the US impasse over the debt ceiling finally making it through the parochial filter, if only after Glenn Stevens’s speech.

The occasional journalist started to actually put two and two together after being explicitly told the answer was probably four on Australia’s stagnant retail and U.S. and European financial uncertainty, while a few punters in social media and talkback cottoned on that maybe people just aren’t that keen on buying a whole lot of crap they don’t need anymore. Don’t expect that theory to appear in the business pages.

The signing off on the Malaysia solution for asylum seekers occupied much news space this week and saw Chris Bowen jump ten spots. This left Tony Abbott in the somewhat strange for him if nevertheless highly defensible position of claiming the Government were being too harsh on asylum seekers. Have Labor just given a lot of inner city lefties a good excuse to keep voting Green despite Gillard’s action on climate change? Quite possibly, but Tony Burke was doing his bit to get them back, popping up in Tassie to push along the forestry agreement.

Meanwhile, Malcolm Turnbull ripped into climate deniers, once again more effectively than anyone in the Government. Turnbull continues to deny that he is trying to undermine his leader, but internal criticism poured from several of his colleagues, calling for him to shed his “bitter and twisted” mindset. Will the currently slumbering beast of massive ideological differences within the Liberal Party be awakened? The promise of impending power remains the ultimate aphrodisiac, so probably not. 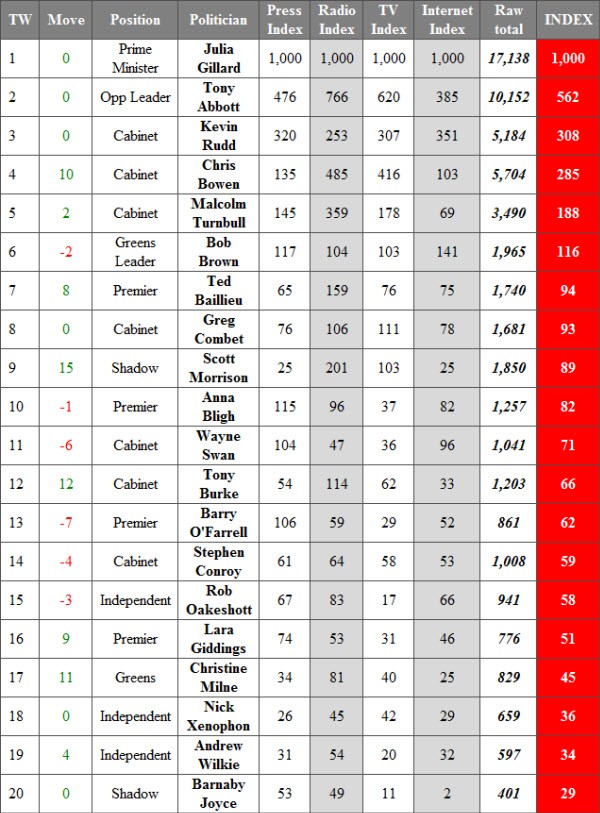 Talkback about Julia Gillard subsided significantly this week. Instead, Malcolm Turnbull took over as enemy number one, but we’re sure the PM will be back in the frame soon enough.

Crikey, he’s a tough little bugger, and does the lack of any massively dominant performances or extraordinary form turnarounds during the Tour mean cycling has entered a post drugs phase? We can but hope.

Vive Cadel … the rider who came in from the cold

I see Media Monitors still has Malcolm Turnbull as a cabinet member. Perhaps they know something…

We have to move on from this issue, but it will bubble under the surface for the next 2 years. People won’t forget they were deceived by Ms Gillard it’s just they can’t do anything about it. No-one likes this sort of situation.