In 2009, the number of Australian bookshops stood at around 2270. Following the REDgroup administration, and other shop openings and closures, we know that this figure is now around the 2000 mark. Some suburbs and towns are now without a dedicated bookshop, writes Bookseller + Publisher's Elly Keating.

The Australian bookselling industry is a substantially different place as a result of the collapse of REDgroup Retail.

As the administration process of what was once the country’s largest bookselling network draws to a close (we are still waiting on a second meeting of REDgroup’s creditors to find out how the funds will be distributed), we are beginning to get a glimpse of what life after Angus & Robertson (A&R) and Borders will be like.

When the board of REDgroup called in administrators Ferrier Hodgson on February 17 this year, the group, which also owned the Whitcoulls bookshop chain in New Zealand and still owns the Supanews newsagency chain, had close to 190 bookshops in Australia. There were 26 Borders shops across the country, 116 A&R company-owned shops and 47 A&R franchise shops.

According to reports from the Weekly Book Newsletter, 139 bookshops in Australia have been lost because of the administration of REDgroup. Including over 200 redundancies at REDgroup headquarters and distribution centres in Melbourne, close to 2100 bookselling jobs no longer exist.

But it is not just about the quantity of bookshops that have been lost; it’s also about where these shops were located. While the Borders shops were generally located in large shopping centres or precincts, Angus & Robertson shops were often the only general bookshops located in suburban or regional areas. Some of these suburbs and towns are now without a dedicated bookshop: 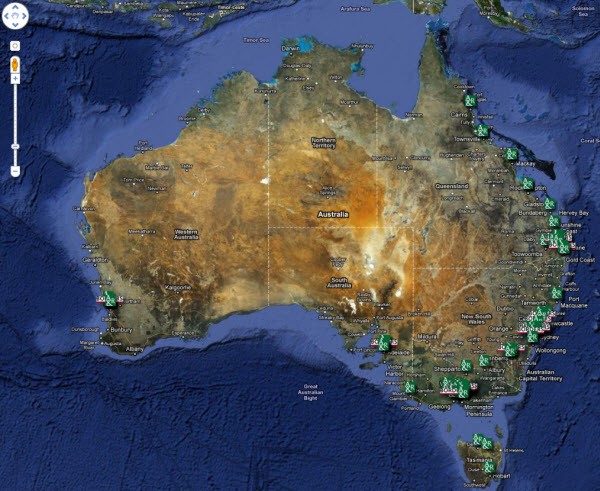 The online businesses of REDgroup Retail are still operating. Pearson, one of the country’s largest publishers, announced in July that it had reached an agreement with Ferrier Hodgson to purchase the businesses, which includes the A&R and Borders websites. It may not be smooth sailing, however, with the Australian Consumer and Competition Commission also announcing this month that it will conduct an “informal review” of the acquisition, which some Australian booksellers have said is bad news for the industry.

The A&R franchise network is also still operating, although the future of the network is unclear. We know that a significant number of these franchises will join Collins Booksellers, with Collins CEO Daniel Jordon telling the Weekly Book Newsletter this month that negotiations with many of the franchises are continuing. These shops will rebrand as Collins shops.

In April, 25 A&R franchises declared their intention to terminate their franchise agreements with REDgroup on the basis that the group was no longer providing value to the shops. Ferrier Hodgson took the 25 shops, many of which had immediately rebranded as independents, to court and a “truce” was declared. Whether these shops will be able to operate as independents remains to be seen.

The picture in New Zealand is somewhat brighter. Ferrier Hodgson were able to reach an agreement with the James Pascoe Group (which owns Farmers department stores and several jewellery chains in Australia and New Zealand) in June to sell the Whitcoulls brand and several Borders shops which are likely to be rebranded as Whitcoulls outlets, with some 900 existing staff staying on to work for the new owners. Previously, the administrators had been able to sell 10 Whitcoulls airport shops as well as the Bennetts outlets located in New Zealand universities.

So what does this all mean?

In 2009, the number of Australian bookshops stood at about 2270. Following the REDgroup administration, and other shop openings and closures, we know that this figure is now about the 2000 mark.

The strength of Australian independent bookshops is one of the key things to take away from the REDgroup experience. Several independents already have plans to build ebookstores, and many more will follow over the next few months. The Australian Booksellers Association is rolling out the Indiebound program, which encourages customers to support their local businesses. And on August 20 the country will celebrate National Bookshop Day.

A year in book buying: tallying the receipts

I think it’s interesting to note that REDgroups problems are not being carbon copied by the rest of the bookselling industry.
Other book retailers don’t have to pay massive rents on shops in centre that cover 3 or more floors of space that Borders has too.
Also their management practice are better. As noted by Pacific Equity Partners (the private equity firm owning REDgroup) “REDgroup has had a very poor year… There are three main drivers for this: the general economic climate, long term competitors to this business have moved to a new level of intensity and finally there has been poor execution on the stock and inventory management systems following the merger leading to stock outages in key selling items.”
This read to me that equally, poor management (or mismanagement) is to blame. While booksellers may be facing 2 of the three, it’s taken all three to bust redgroup.

I think it’s also worth noting that Borders continually marked up over RRP, despite the illusion that it was a cheap bookstore because it was so large, while many other chains or independents didn’t not mark up on RRP (or at least by as much).

@ramastar: “This read to me that equally, poor management (or mismanagement) is to blame.”

Yep, it’s managers that kill companies, not the staff, and the madness of it is that many of them exit with a “golden parachute” of obscene proportions while the staff get retrenched.

The first and only time that I have experienced a mark up at point of sale was at a Borders store. I didn’t know it was even legal to do that here. I told the sales clerk to keep the book and walked out, never to return. When they pulled that stunt the writing was well and truly on the wall for Borders. What a pack of idiots ran that outfit!

I read a comment by a long-term Borders employee that management had fired experienced, knowledgeable staff and cut the range of books to unsustainable depths. The shops went from places you could find what you wanted, discover new books and receive useful support and stimulating recommendations, to something which simply duplicated Big W’s discount table and robotic service at three times the price. People didn’t find what they wanted, and weren’t encouraged to come back.

Another comment, by a long-term employee of A&R, said “Lots of people come through the door all day, but we never have what they’re looking for”.

Our regional area (Riverland SA) hasn’t had a new-book shop in many years. Our newsagents, even with what they make from gambling, are closing down. I used to look forward so much to going to Adelaide and browsing Borders, A&R and Dymocks (three bookshops in Rundle Mall were a wonderland to someone from a region with none), but it’s years since I found anything interesting in those shops. You actually need to find something you want to buy, for a bookshop to keep running.

In contrast, second-hand bookshops always bring the treasure-seeking gleam to my eye (and revenue to their owners).

The fate of Borders Online is important, since with the irrationally-imposed geographic limitations, it is our only current hope for equitable access to ebooks. I gather that my hundred or so purchased ebooks have been shifted to Kobo (in Canada). How does that affect our access to ebooks on Borders Online? Will future ebook purchases, made according to deals Borders did with local publishers, then be available on Kobo’s Canadian servers? How does that make sense in geolims terms, since Borders was actually getting access to Agency 6 ebooks for us before they were made available internationally? Will geolims become even more inconsistent?

As a published author myself, my experience of dealing with REDgroup retail left me frustrated and out of pocket substantially. My book sold well through their Adelaide stores yet it took me and my publisher close to a year to recover our money from them.

It’s not surprising to me at all that they have collapsed. I have now decided to divest myself from any involvement in dealing with bookstores and have set up my own online portal to sell my books in both print and eformats. Sure it might not be as glamorous but I have an audience and I derive enough of a small income from it for it to be enjoyable again.

In April, 25 A&R franchises declared their intention to terminate their franchise agreements with REDgroup on the basis that the group was no longer providing value to the shops. Ferrier Hodgson took the 25 shops, many of which had immediately rebranded as independents, to court and a “truce” was declared.