Blair, Murdoch and the Iraq war — a study of power

Former British Prime Minister Tony Blair's first comments about Murdoch yesterday were quite pathetic. If David Cameron is being subjected to enormous scrutiny over his dealings with Murdoch then so should Blair, Gordon Brown and John Major.

Conrad Black’s fabulous comment piece in The Financial Times about Rupert Murdoch was pretty close to the mark when he said the following:

“He has difficulty keeping friendships; rarely keeps his word for long; is an exploiter of the discomfort of others; and has betrayed every political leader who ever helped him in any country, except Ronald Reagan and perhaps Tony Blair.”

Margaret Thatcher and George W Bush haven’t exactly been savaged by the Murdoch press and even Paul Keating managed big regulatory favours for the Murdochs without being subjected to an editorial onslaught. Indeed, when 60 Minutes did its famous Paul Lyneham hatchet job on Keating’s piggery interests in 1998, then Daily Telegraph editor Col Allan was so loyal that his paper refused to cover story the following day.

Allan even went so far as to say that if he had one day left on earth he would choose to have lunch with Paul Keating, much to the annoyance of his wife. No wonder Keating happily spoke at Allan’s farewell function in Sydney when Rupert sent him to edit the New York Post in 2000.

Keating’s reluctance to stick the boot into Murdoch’s power abuse and political deal making during a recent Lateline interview raised a series of questions about his News Corp dealings. But they are nothing compared with the questions Tony Blair should be answering, considering he led a government which kept Britain out of the Euro and happily invaded Iraq, all at the urging of Murdoch.

Blair’s first comments about Murdoch yesterday were quite pathetic. The contrast with Gordon Brown’s 30 minute parliamentary tirade says it all. If David Cameron is being subjected to enormous scrutiny over his dealings with Murdoch then so should Blair, Brown and John Major.

To understand Murdoch it is worth reading this BBC magazine series on media moguls which quotes Tabloid Nation author Chris Horrie as saying: “They all want to be Hearst. You start wars, select presidents and in the end go mad.”

Rupert Murdoch may yet follow the trend. He certainly has made or broken dozens of political leaders over the years and was a key factor in the invasion of Iraq. At the time he predicted this would deliver an oil price of $US20 a tonne which would be like a tax cut for everyone.

Think about it for a moment: if the Murdoch media properties had campaigned against the Iraq invasion does anyone seriously believe it would have happened?

The three members of the Coalition of the willing were Australia, the US and the UK — all countries where Murdoch is the most powerful media player. Spain was the tentative fourth member of the Coalition and when Spanish Prime Minister Jose Maria Aznar was defeated in 2004, Rupert showed his loyalty to those who backed the Iraq invasion by promptly installing him on the News Corp board.

After running the unsuccessful Tory campaign in 2004, former federal Liberal Party director Clinton Crosby publicly stated that News International backed one last term for Blair because of his support for the Iraq invasion.

John Howard received similar treatment. Some Murdoch papers may have endorsed Kevin Rudd at the 2007 federal poll, but Howard was strongly supported by the Murdoch press in 1998, 2001 and 2004.

Besides, News Corp’s Harper Collins book division ended up paying John Howard the biggest six-figure cheque of his career for his memoirs after leaving office.

Former MSNBC presenter Keith Olbermann has had hundreds of cracks at News Corp over the years and was very big on the theory that Murdoch likes rewarding his political allies with book advances.

The most notable dated back to 1994 when Harper Collins agreed to give Newt Gingrich $US4.5 million just a few weeks after the Republicans had swept to power with Gingrich leading the Contract with America movement as House speaker. At this Time magazine feature explains, Gingrich ended up surrendering all but $US1 in the ensuing scandal.

Which brings us to Blair, who must be extremely relieved in hindsight that Random House out-bid Harper Collins for the rights to his memoir. Interestingly, Random House’s UK CEO Dame Gail Rebuck sits as an independent director on the BSkyB board. Call me a conspiracist, but maybe the Murdochs worked out it wouldn’t have been a good look to give Blair $7 million so they weren’t too disappointed when family friend Gail Rebuck stepped up to the plate on behalf of Random House.

It took three years to negotiate but Blair’s conscience got the better of him last August when The Guardian reported:

“A spokesman for the former prime minister, who is understood to have already received a £4.6m advance for his memoirs, said he would hand over all the money he makes — including the advance — ‘as a way of marking the enormous sacrifice [the armed forces] make’.

“Blair’s spokesman said: ‘Tony Blair recognises the courage and sacrifice the armed forces demonstrate day in, day out. As prime minister he witnessed that for himself in Iraq, Afghanistan, Northern Ireland, Sierra Leone and Kosovo. This is his way of honouring their courage and sacrifice.'”

*Stephen Mayne is a former News Ltd journalist and Australian shareholder activist who has spent several hours asking Rupert Murdoch questions at News Corp shareholder meetings. He can be reached on Stephen@maynereport.com or @maynereport on Twitter. 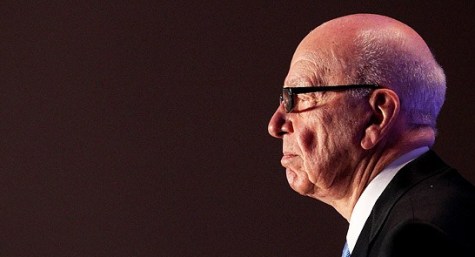 Murdoch family civil war, but don’t write off Rupert yet

I always thought that when Murdoch appeared before a panel it would be at the International Criminal Court in the Hague, along with Bush, Blair and Howard, to answer for their part in the war crime of the invasion of Iraq. You’re right Stephen, Iraq would never have happened without Murdoch.

Does Tony Blair honestly believe he can buy back his soul?

When Tony Blair, a Catholic convert, debated with Christopher Hitchen on religion and atheism he claimed that Christians always aimed to do “good.”
He was never asked if he thought, as a Christian, he did “good” when he sent British troops to join in the invasion of Iraq, a war which cost at least 100,000 lives, created more than two million refugees, many of them Christians fleeing from Shiite persecution, and turned Iraq into an ally of Iran.
Perhaps in the many interiews he’ll give here (and at the end of his high-priced speeches) someone might ask him.

The very idea of Murdoch doing some social good is laughable in the extreme. I hope the British authorities will look very closely at all those visits of cabinet ministers with Rupert.