Crikey media wrap: Greens leader Bob Brown called for a "full inquiry into the media, both ownership and regulation, in Australia" yesterday, in light of the recent News International phone hacking scandal in the UK.

The fallout from the UK phone hacking scandal continues to affects Australia, with a political push for an inquiry into media regulation and ethics of the Australian media.

Greens leader Bob Brown called for a “full inquiry into the media, both ownership and regulation, in Australia” yesterday, in light of the recent News International phone hacking scandal in the UK.

Although News International is a completely separate business from the News Limited papers in Australia, both are owned by Rupert Murdoch under the News Corporation banner. Brown acknowledged that no illegal methods of information gathering like the New of the World voicemail hacking had been found here, but “the potential for such behaviour and the breadth of the allegations in the UK indicates it is timely for a closer look at Australia’s media regulation”.

PM Julia Gillard didn’t immediately dismiss the idea, instead saying she “will be happy to sit down with parliamentarians and discuss that review that people are obviously contemplating”.

A Senate Committee on Australia’s media regulation be set up to inquire into and report on:

(a) The potential to expand the jurisdiction of the Australian Communications and Media Authority to include newspapers; and/or;
(b) The need for a independent statutory authority to oversee and enforce the code of ethics for journalists;
(c) The requirement for and content of a ‘fit and proper person’ test for holders of a television or radio licence and for major newspaper proprietors, whether in print or on-line;
(d) The effectiveness of Australia’s current media ownership laws in preventing concentration of media ownership;
(e) The effectiveness of civil and criminal laws relating to the protection of privacy in relation to media reporting; and
(f) any other matters relevant to the above terms of reference.

It’s understood that Gillard would negotiate the terms of terms of reference before agreeing to any probe into media regulation here in Oz.

It comes as News Limited announced a full review of all editorial spending in the last three years to ensure all expenses paid for were “legitimate services”. John Hartigan, CEO of News Limited, appeared on ABC’s 7.30 last night to discuss the NotW scandal and vehemently denied that similar behaviour appeared in News papers here. He said:

“I’m hugely confident that there is no improper or unethical behaviour in our newsrooms. I think people need to understand the very different environments that we have in newspapers in this country and also in the United Kingdom. They refer to a lot of the media as “red tops” in the United Kingdom. They’re very aggressive newspapers. They have — you know, they’re very sensational, they deal with people’s lives, private lives, and they — some of the behaviours that have come out have obviously been driven by the need to get in front of each other. I would argue very strenuously that we don’t have those behaviours in Australia.”

The Australian lead with news of Brown’s call for a media inqury on its front page today, but had an interesting juxtaposition with a story calling The Age‘s ethics hypocritical after rolling around all this week in the News International saga although it recently published a story that involved The Age accessing an ALP voter database without permission. 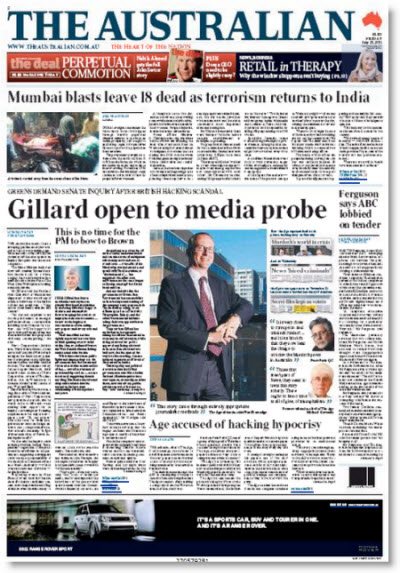 Barrister Peter Faris QC, who had his details accessed by The Age in the ALP database, calls The Age‘s actions regarding the database as “very close to corruption and criminal conduct”. He writes in The Australian: “The Age has covered up this incident and it is a bit rich that they now lead the charge to criticise the Murdoch press in Australia.”

Yesterday Gillard addressed the National Press Club yesterday to discuss the carbon tax and questioned its coverage of her carbon price plan. “I’d say to you, don’t write crap. [It] can’t be that hard,” she said. ”And when you have written complete crap, then I think you should correct it.” The advice was met with laughter and applause from the journos gathered.

Back over in the UK, Rupert Murdoch and son James finally agreed to face a parlimantary inquiry into the dealings of News International papers, after being threatened with jail by MPs if they failed to co-operate. They will give evidence in front of a Commons culture select committee next Tuesday. News International exec and former NotW editor Rebekah Brooks had already agreed to face the committee meeting.

Legal action against the NotW action continues, with former New of the World deputy editor Neil Wallis arrested yesterday in light of allegations that NotW paid police bribes. It puts Scotland Yard under fresh pressure after it emerged that Wallis had been hired as an advisor on “strategic communications” to senior Yard officers just last year, at the same time that Scotland Yard was rejecting calls to reopen the police investigation into the phone hacking scandal.

Over in the US, the FBI opened an inquiry into allegations that News journalists in the US, working for NotW, attempted to gain access to the phone records of 9/11 victims. So far it’s just a preliminary inquiry after Congressman and news reports called for further investigation into the claims.

Bob Brown's opposition to a new wind farm project isn't a sign of failure, it's a further victory. The way we live is fundamentally changing.

At the very foundation of the Greens are many of the maladies that afflict them today. Paddy Manning's new book lays them bare.

Bob Brown's anti-Adani convoy has been derided by conservatives for alienating the very voters it was supposed to draw in. But Brown isn't so sure.

Have a look at The Australian’s opinion pages especially the blogs – all censored.

Their response to this makes Vatican spin on kiddie fiddlers look professional.

When are they gunna get it?

Here we go. Power’s gone to Bob Brown’s head and now he’s dropping all pretence to being a guardian of civil liberties:
[(c) The requirement for and content of a ‘fit and proper person’ test for holders of a television or radio licence and for major newspaper proprietors, whether in print or on-line]
I wonder what Stephen Conroy, who wanted a Chinese style internet censorship wall, will think of that. But Conroy’s internet censorship would have let content through by default, blocking only that which was specifically identified and proscribed.

Brown’s latest idea goes much further: to publish would become a criminal offence unless you have the government’s explicit license to speak, based on “character tests”. I wonder if you would also need a license to speak from a soap box in the Domain.

Here’s what Malcolm Turnbull said to ABC Radio:
[There have always been rules of fitness, propriety or related concepts applying to broadcast media and that is because it is radio and television and that’s because they are licensed properties.
Now as far as newspapers are concerned, there has never been any requirement for people to have a licence to operate a newspaper and I think it would be appalling if we were to get to that point.]
Newspapers are like the rest of us: you don’t need a license to open your mouth and say something, but if you break the law you may be held to account after the fact. That’s how a free society works.

I like Malcolm Turnbull’s restraint in describing Bob Brown’s suggestion as merely “appalling”. I won’t be so polite. I think I can now say this without committing a gratuitous Godwin offence: Bob Brown, my father faught in a world war against the likes of you, and the good guys won.

The lefties loved the Murdoch Press (Telegraph and Australia) when they were talking up Whitlam to power in 1972, and then with Hawke and Keating in later years and some of their good initiatives like 4 pillar banking, franking crdits etc, and then some of Howards.

BUT, as soon as they see through Rudd & Gillard and flawed policies, waste, ineptness, and fake crocodile tears, they are howled down and Gillard calls for an inquiry.

I think as part of the terms of reference, they need to have a look at Canada’s truth in the media laws and look at implementing it here.

Why do you think that Rupert canned his push to get Fox into Canada. He would have been shut down within a week.

My Father also fought in two wars against the like of Bob Brown and Sarah HY and has shrapnel wounds and schrapnel that cant be removed in the back of his head and a shunt to remove fluids to prove it.

Luckily he survived and his patrol reduced the number of Bob Brown and Sarah HY look a likes.