Crimes: stop teasing us, meanies! Australia had a good laugh at Canberra’s expense this week. But the local rag didn’t see the funny side. A public service brochure from 1973 found its way to the internet — “A week in the life of 3 young girls in Canberra” — detailing their action-packed capital lives: “the work is really a lot more interesting than I thought it would be”; “there’s lots to do after work”; “we like to go home for lunch every day”; “but sometimes we go to one of the good restaurants for a night out”; “we think the shops are as good as Sydney and Melbourne”; “everything is so pretty!”. 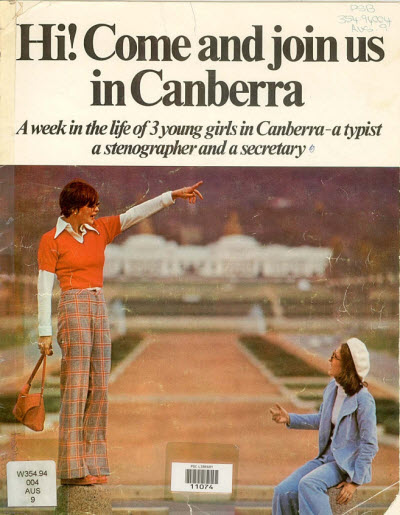 That’s right, have your jokes, a wounded Canberra Times writes in its editorial today:

“Of course, the 1973 pamphlet is barely relevant to the national capital today, but that’s beside the point. Knockers took the opportunity to cast all of the usual slurs: Canberra’s cold; it lacks nightlife; it has ugly buildings; it has fewer shops than larger cities. Funny, right?

“…It’s true that some people who move to Canberra — usually to boost their careers — don’t enjoy it. Perhaps, to them, the city is dull; perhaps they’re homesick. But such attitudes say nothing about our city; they simply reveal an aloofness and lack of invention in those that hold them. We hope their careers make up for their unhappy lives.”

Melbourne property mag wars. Fairfax’s Melbourne chief operating officer David Hoath has had a crack back at Crikey following our story last week that circulations on several editions of real estate glossy the Melbourne Weekly have been in rapid decline. Hoath reckons that because the Circulations Audit Board data he published on June 29 — that revealed 16,000 copies had been hived off the stable’s total print run — was based on “Christmas shutdown” figures, the circ was naturally smaller. But Hoath misses the point that he is selling using old data — even the newly-reduced numbers are overstated and don’t reflect the parlous state of the mag.

Despite his protestations, Hoath doesn’t have to wait six months to declare the number because he knows every week what numbers he prints. He could just add them up and divide by the number of weeks and publish that. In fact, he could even go to press each week and publish the number that was sent to the printer before the presses start rolling. 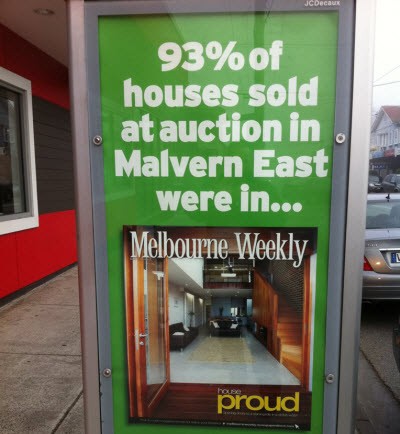 Meanwhile, the Melbourne Weekly continues to pull the wool over readers and advertisers’ eyes, with this tram stop ad claiming it had advertised “93% of the houses sold at auction in Malvern East”. But look closely: the fine print states the claim is based on figures from September-November 2009. That’s close to two years ago — well before rival the Weekly Review stepped in to slash its bitter rival’s revenue by $30 million a year. A more accurate Malvern East figure for July 2011 would be closer to 5%, if that. — Andrew Crook

Front page of the day. As the UK Independent reports today, US authoriteis are now looking into News Corp’s practices in the States: 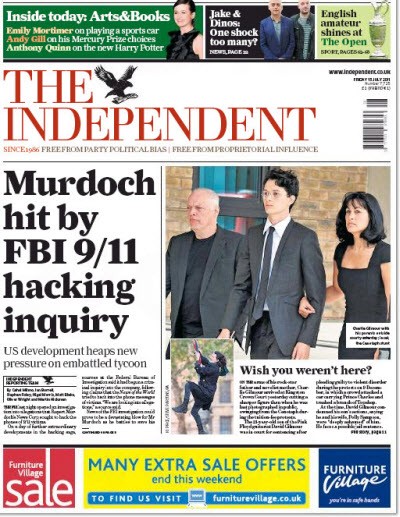 The Department of Corrections. Today’s correction comes from The Guardian column of the astute Roy Greenslade. It’s not just the correction that caught our eye here at Crikey, it’s the News of the World-themed response from a reader. According to Greenslade:

A picture of Rebecca and Benjamin Fenn on a stall with toys at the Faversham Festival incorrectly stated they were made out of old socks.

In fact, the toys are made out of new socks by Lost Socks, run by Leanne Fenn. They are available to buy at Boodiroo in Preston Street, Faversham.

This elicited a letter from a reader, Nick Torry:

“Sir, Your editorial comment regarding the goings on at the News of the World (Faversham News, July 7) made excellent points on not shackling the freedom of the press in general.

In a week when the nation’s biggest selling paper is closed down after a catalogue of appalling, immoral and possibly illegal episodes involving invasions of privacy almost beyond imagination, it is comforting that an apology on the same page in last week’s Faversham News puts the actions and failings of the regional press into perspective …

You got it wrong and you made an immediate apology and set the record straight.

While this caused some amusement over our breakfast table it does indeed serve to show a stark difference in approach and responsibility. And when there are serious local campaigns to be fought we can rely on an honest and independent approach.

We raised a cup of cocoa to our wonderful local newspapers. Our world would be a poorer place without the Faversham News and its ilk.”

We couldn’t have put it better.

“In his first significant public comments on the tabloid newspaper scandal that has engulfed his media empire, News Corp. Chairman and Chief Executive Rupert Murdoch vigorously defended the company’s handling of the crisis but said it would establish an independent committee to ‘investigate every charge of improper conduct.’ — The Wall Street Journal

“The FBI has opened a preliminary inquiry into allegations that News Corp. employees sought to hack into the phones of victims of the Sept. 11 terrorist attacks and tried to bribe law enforcement officers for information, U.S. officials said Thursday” — Washington Post

“Federal ministers have reported to cabinet what they consider ‘inappropriate’ personal lobbying by ABC bosses during the public tender process for the $223 million contract to broadcast Australia’s overseas television service.”– The Australian

“Avoiding repetition has perhaps been one of the most difficult aspects of covering the Harry Potter series. And the last movie in particular has posed a challenge for film critics who want to write compelling reviews even for the millions of fans who already know how the movie will end.” — Poynter

Get out of our lives: when newspaper campaigns become sinister

Sir
To claim that Rebecca and Benjamin Fenn are made out of old socks is an outrageous slur. I demand retribution and a House of Commons Inquiry.
Yours etc
Major General and so on

I know it was the seventies, but c’mon: there must have been more Canberran jobs available to women than just low-pay-grade clerical work.

There were no jobs available for “women” at all – the brochure makes it clear that only “girls” are invited. And there was no point in letting them do anything other than low-pay-grade clerical work because they would get married and have to leave anyway.

Kate is correct. To my eye those two gals appear to be loitering in the park but were actually husband hunting.

What is in any case making a difference again is proper,
old fashioned reporting.
Here a video with Nick Davies, the Guardian reporter
who reported about such tabloid scandals since years
and whose investigative journalism also led to the
uncovering of the Milly Dowler scandal, the one that
eventually blew it.
In the video Nick Davies tells how it all came to it:
http://tinyurl.com/6j34zsr