International slip isn’t Limited. Accurately reporting on the various divisions of Rupert Murdoch’s global media empire is particularly important when one of them is involved in a devastating scandal. Local executives are clearly keen not to be associated with phone hacking claims. Nine News was forced to apologise for a slip during its bulletins last night, with Leila McKinnon in Sydney humbly pronouncing: 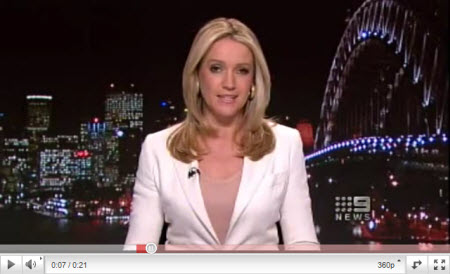 “Last night on Nine News we reported that executives of News Limited were suspected in involvement in the phone hacking scandal. This was incorrect. The scandal involves News International in the United Kingdom and not News Limited, which is based here in Australia. We apologise for the error.”

Lesson to journalists everywhere: News Corporation is the holding company, News International is the UK-based arm, News Limited is the Australian business. If you don’t remember, John Hartigan is sure to remind you. — Jason Whittaker

Courier Mail outs Thorpie. Ian Thorpe is sick of people questioning his sexuality, he told London’s Sunday Times. “If you try and fight it, you’re damned; if you don’t, you’re damned. If you get married, it’s a sham.” The Courier Mail‘s bitchy Confidential pages picked up on the comments, noting: “Thorpe has previously alluded to a relationship with fellow swimmer Amanda Beard. But she insists it was just a friendship.”

Curiously, the print version of the story leaves it at that. But there’s another throwaway line if you read the online copy: “NB: The irony of the name Beard is not lost on Confidential.” Wink, wink. Good job proving his point.” — Jason Whittaker

Front page of the day. We wanted to give it to the NT News today for its “massive croc” front page. But Italy has become the latest country to be hit hard by Europe’s worsening financial crisis. And as Italian daily Libero painfully describes today, the country has just endured a “stock market crash” as it slides closer to joining Greece’s financial woes. 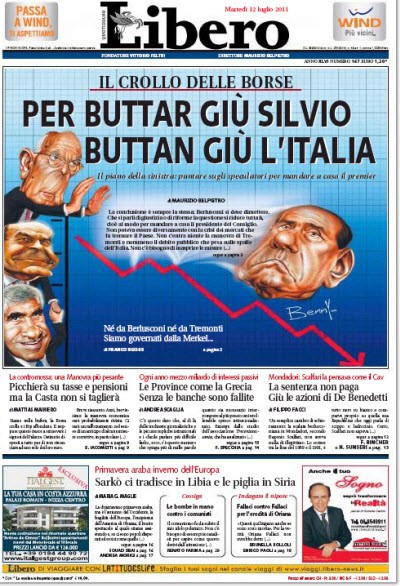 The Department of Corrections. A decade does indeed make a difference, as the July 10 edition of the Arkansas Democrat-Gazette points out:

“So far she’s largely avoided the pitfalls that Sarah Palin stumbled into in the 2008 White House race, while enjoying almost Palinesque outpourings of adulation on the campaign trail. That is until this weekend when she walked right into a row over slavery.”– The Guardian

“The crisis engulfing Rupert Murdoch’s global media empire dramatically worsened last night when it was claimed that private investigators working for The Sun and The Sunday Times targeted the former Prime Minister Gordon Brown.”– The Independent

Britain plans drama on the Murdochs

“We’ve had The Kennedys, and now Britain’s Channel 4 is in development on a drama about the Murdoch family set in the future.” — TV Tonight

Making a court room drama out of a media crisis

“Few cases of sexual assault against journalists have ever been documented, a product of powerful cultural and professional stigmas. But now dozens of journalists are coming forward to say they have been sexually abused in the course of their work A CPJ special report by Lauren Wolfe.” — Committee to Protect Journalists

Is the NT News actually a newspaper, or the publicity arm of the NT Crocodile farms?

The new Channel 4 show set in the future – “Dynasty” or “Prisoner”?