The majority of Australian News Limited papers have ignored or buried revelations regarding the News of the World scandal, write Andrew Crook and Leigh Josey.

The majority of Australian News Limited papers have ignored or buried revelations that their UK Sunday sister, the News of the World, hacked into the voicemail of murdered teenager Milly Dowler — the biggest media story in years.

A Crikey survey of the eight Australian News Limited metropolitan daily mastheads reveals that only the Herald Sun and The Australian covered the yarn, with the brave souls at the Hun dedicating just 28 words to it in a brief on page 32… just above an item about Nathan’s hotdog eating champion Joey Chestnut. 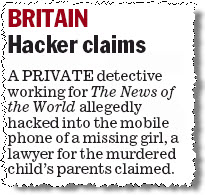 The Australian reproduced an Associated Press story on page 11 in the World section, in much the same manner as Fairfax competitors The Age and The Sydney Morning Herald. But the other six News dailies — the Daily Telegraph, the NT News, the Advertiser, the Courier-Mail, The Mercury and the Gold Coast Bulletin failed to mention it at all.

Amusingly, all local tabloids included an unrelated story into someone hacking into Fox News’ Twitter account and tweeting lies about the death of Barack Obama. 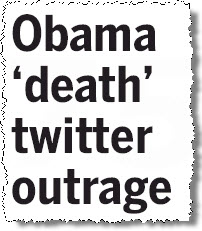 The headline that appeared in the Hobart Mercury today

To its credit The Oz followed up this morning with an embedded video and its media diarist later uploaded a blog post containing a excerpt of an extraordinary Times editorial (read the full text here) that branded the actions of its fellow News employees “beyond reprehensible”.

The official line from The Times is worth quoting in full:

“Before today, The Times, which, like the News of the World, is owned by News International, has taken the view that it ought not to comment on the issue of phone hacking. We have sought to report the story straight, in good faith, without taking any editorial view. A supportive line invites the accusation of speaking from the party script. A critical line is easily written off as a deliberate, insincere attempt to create distance from the story.

“But anyone who has serious faith in the public purpose of journalism has to record his or her dissent from the behaviour that has now been alleged. Anyone who believes in the nobility of the trade of reporting the truth, the better to inform the readers, and anyone who believes in the contribution of vibrant comment to a raucous and well-informed democracy, has to be clear when a line has been crossed. Over and above the internal inquiry that will be conducted at News International, this matter now requires the most rigorous possible police inquiry, which must be carried out, in David Cameron’s words, ‘without fear or favour’.”

Yesterday, the News-owned UK dailies went soft, with The Times running a one-column page 1 report and The Sun taking the low-road with a pitiful 95-word effort under the headline “‘Murdered Milly’s phone ‘got hacked'”. Neither initially mentioned News International chief Rebekah Brooks’ name in relation to the saga.

But the beleaguered chief then penned a widely-reported all-staff email claiming she was “sickened” by the news and that it was “inconceivable” that she would have known about Dowler, despite it occurring under her watch as NotW editor in 2002.

This morning’s UK press contained a fresh round of damaging revelations, with The Independent splashing that Brooks had previously initiated searches by a private investigator leaned on later to tap into Dowler’s voicemail. On its front page, The Times turned the blowtorch back on dumped David Cameron spin doctor Andy Coulson, noting that he was editor of NotW when the paper “paid police for information”.

And the Guardian — which in 2009 broke the initial story that the NotW hacking activities went beyond the Royal Family — was like a pig in mud, devoting a quintuple-bylined front page lead on its website to reports that several July 7 London bombing victims had been contacted by Scotland Yard to tell them their phones had been hacked.

The paper’s first edition (below) had a story that other murdered children had been drawn into the NotW web under Brooks’ editorship — Holly Wells and Jessica Chapman, the Soham 10-year-olds killed in 2002 by Ian Huntley. It also included a swingeing editorial, coverage of the Brooks angle, and the potential fallout for the recently approved BSkyB deal. 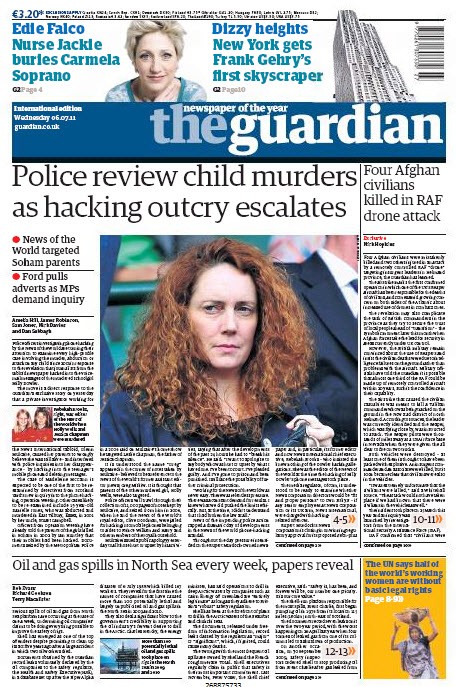 Last year, former Herald Sun editor Bruce Guthrie detailed the self-censorship at News in his book Man Bites Murdoch. He said overt diktats from inside News were rarely necessary, with Murdoch yes-men internalising their master’s voice in their day-to-day decision making.

On this morning’s evidence, while The Times appears to be moving in the right direction, it seems Murdoch’s Australian stable remains brave and true.

News Limited are clearly better at censorship than the other one party states around the world at the moment.

is anybody really surprised by what murdoch newspapers do , just look at there past history here and in many other places over the world

the man is quite simply not a DECENT HUMAN BEING

and the organisation that he owns is a disgrace

Just fixed that up for The Times of London.

It’s news. It’s big news. It should be reported by any news outlet that pretends to be capable.

It’s been happening right under their noses for years. It should have been fully investigated and reported years ago.

Therefore, News Ltd are again exposed as being either incompetent or corrupt.

They are either crooks or fools. Either way, News Ltd is not a credible news outlet.

I think that covers it.