Crikey media wrap: After months of phone hacking scandals at the Murdoch-owned UK tabloid News of the World, revelations that the voicemail of a missing 13-year-old girl was hacked tipped the debacle into a public war.

After months of phone hacking scandals at the Murdoch-owned UK tabloid News of the World, what tipped this from a scandal that failed to engage the public into a war that has the British people baying for blood? Revelations that the voicemail of a missing 13-year-old girl was hacked, giving her parents hope that she was alive — as voicemail messages had been deleted after she went missing — and interfering with police investigations.

As the Crikey editorial wrote yesterday: “We’re not talking about Sienna Miller any more.”

After learning that missing girl Milly Dowler had her mobile phone hacked back in 2002, the UK police announced it will review every high-profile case involving children being attacked, murdered or kidnapped since 2001. This includes the case of Madeleine McCann, who went missing as a 3-year-old in Portugal in 2007 and Holly Wells and Jessica Chapman, the ten-year-olds from Soham in the matching Manchester shirts who were murdered in 2002.

Police are also contacting families of victims from the 2005 London bombings after information that their phones may have been hacked.

Labour leader Ed Miliband is calling for a public inquiry into the allegations after the police conclude their investigations. An emergency debate has been called for Commons tomorrow to examine the need for a public inquiry, although it is not yet known whether PM David Cameron supports an inquiry. Cameron has called the hacking of Milly Dowler’s phone a “truly dreadful act” if true.

But Labour has been loudest in its criticisms of NoW with Miliband taking the brazen step of insisting that former NoW editor and current chief of News International Rebekah Brooks “should reconsider her position”.

“This is about the culture and practices, which were obviously going on at that newspaper, the News of the World, over a sustained period of time,” said Miliband. Executives at News International need to “start taking responsibility for this”, said Miliband, adding that Brooks “should examine her conscience, and I think she will, as this happened on her watch. It’s not about one incident but what was happening systematically at a newspaper.”

Brooks sent an email to staff yesterday saying she was “sickened” to hear of the events involving the hacking of phones of missing children, but denied knowing about it:

I hope that you all realise it is inconceivable that I knew or worse, sanctioned these appalling allegations.

…Although these difficult times will continue for many months ahead, I want you to know that News International will pursue the facts with vigour and integrity.

I am aware of the speculation about my position. Therefore it is important you all know that as chief executive, I am determined to lead the company to ensure we do the right thing and resolve these serious issues.

We will face up to the mistakes and wrongdoing of the past and we will do our utmost to see that justice is done and those culpable will be punished.

But is Brooks telling the truth? The front page of Wednesday’s The Independent — tweeted by a BBC radio journo — indicates that it has “evidence which challenges News International chief’s story”. The article is now up on The Independent‘s website. 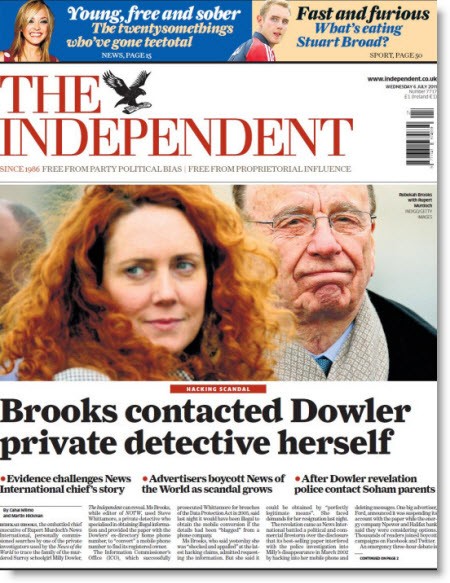 Glenn Mulcaire, the private investigator hired by NoW, was jailed for phone hacking back in January 2007. He released a statement and apology yesterday to The Guardian after it revealed that news that Milly Dowling’s phone had been hacked. Part of the apology mentioned the pressure of working at NoW:

“Working for the News of the World was never easy. There was relentless pressure. There was a constant demand for results. I knew what we did pushed the limits ethically. But, at the time, I didn’t understand that I had broken the law at all.

“A lot of information I obtained was simply tittle-tattle, of no great importance to anyone, but sometimes what I did was for what I thought was the greater good, to carry out investigative journalism.

“I never had any intention of interfering with any police inquiry into any crime.

The latest news comes just days after Rupert Murdoch was given the green light to take over TV network BSkyB, following an eight month inquiry by the government into media ownership and domination (Murdoch owns the majority of UK tabloids, including NoW). With three days left for public consultation on the issue, a website has been established to send emails to the government protesting the Murdoch deal, with nearly 55,000 emails already sent.

Major advertisers at NoW — including Ford, Halifax and T-Mobile — pulled their ads from the paper yesterday. A petition calling for a national inquiry into the phone hacking allegations and other illegal intrusions by the press has the support of high-profile journalists, politicians and writers including John Pilger and Roy Greenslade. The Guardian is also running an excellent liveblog updating news on the phone hacking scandal as it breaks.

Matthew Norman writes a fiesty op-ed in The Independent about the need to stop Murdoch’s power now and not allow the BSkyB deal to go ahead:

“This is an amorality tale of systemic corruption as insidious, deep-rooted, all-embracing, diseased and destructive as any known to a modern Western democracy. To understand how it came to this — how prime ministers and our premier police force became the enablers of News Corporation’s abundant wickedness — you must go back several decades. When Margaret Thatcher made her Faustian pact with Mr Murdoch in the 1980s, granting him his every heart’s desire in return for his unwavering slavish support, she hastened the creation of the monster we see revealed in all its gruesome hideosity today.”

Very impressive I think we should get this Newspaper proprietor to create our electronic public face to Asia!

Funny the total silence from NEWS LTD press on this in OZ,and the usual right wing idiots who turn up defending Murdoch on here wonder if Juioner could end up in Jail with Dad.
Now would not that be an interesting way for it to pan out,is NEWS LTD a criminal organization that’s an even better question

What is really interesting is the advertisers, rushing to withdraw their advertising dollars from this appalling newspaper. One also wonders if sales of the rag will be affected?

It’s clear the Government, by hiring and protecting Colson, is implicit in illegal dealings.

Shouldn’t the Queen get involved in this?

I know if I were her, I’d sack the government and take control of all News Limited papers. Then again, if I were here, I’d have executed Murdoch for Treason years ago.

Reverse the roles and imagine how News Ltd papers would behave if, just for argument’s sake, a Labor government hacked the phone of a missing 13-year-old girl.

Now compare this with the current considered response from the British government and ask yourself about power in the West.

It is now beyond doubt that you cannot overstate the threat Rupert Murdoch presents to our democracy.