This is what they do

The News of the World hacking scandal just picked on the wrong person. Not rich, not powerful, not political, not privileged, not public. A murdered British schoolgirl.

“…this really appears to be an unstoppable thing.

“First, they did it. Boy, did they do it. And then they tried to cover it up. Oh, and it turns out they documented it, too. And then there is the hard-core, bedrock, long-oppressed, anti-Murdoch faction in the UK, suddenly armed with a mighty weapon: a scandal, into its third year, that drips out week after week. There doesn’t seem like any going back to an invulnerable Rupert.”

He’s referring to the News of the World phone hacking scandal. It was unstoppable back then, but not enough to stop Murdoch finally getting the green light from the British government to pursue full ownership of BSkyB.

Hacking hundreds of phones of the rich and powerful in a clear and breathtaking breach of civil liberties may not have been enough to increase public pressure on British politicians, but now … well, if Wolff thought this story was unstoppable before. This scandal just picked on the wrong person.

A 13-year-old, to be precise. Not rich, not powerful, not political, not privileged, not public. A murdered British schoolgirl. 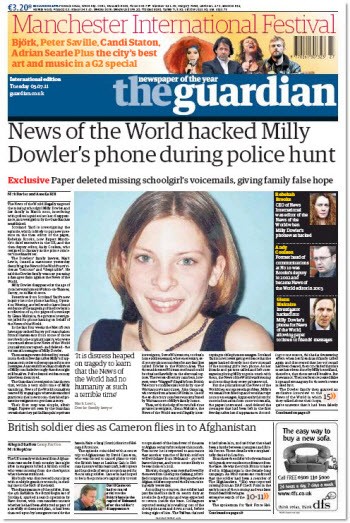 We’re not talking about Sienna Miller any more.

Wolff wrote back in June: “Hacking is not at all an aberration, or a what-were-they-thinking error of judgment and strategy, but an expression of the company’s fundamental identity: it’s not just that they did it, but, more importantly, this is what they do.”

Hack missing 13-year-olds’ accounts. Jeopardise police investigations. Destroy potential evidence. Give false hope to families. The same family who granted a full interview to News of the World at the time of their daughter’s disappearance in a bid to publicise her plight, all the while ignorant of the fact the paper was listening in on their daughter’s phone.

This is what they do.

How low can rupert go ? seems the bar is on the ground now. Lower than a rattle snakes penis. This is the mob that wants Australia’s International News CONtract ?

I guess there is no hope that people will stop buying ghastly newspapers like NOW?? As Barry 09 has said, how low can you go?

Lulz, please come back, we’ve got a job for you…

But our own ABC Breakfast quotes from the News Ltd front pages every day as if they were holy writ.

Read the linked Grauniad article – holy sh*t!!! As if there were any doubts about the ruthlessness, cynicism and irresponsibility of News Limited.

NOW’s conduct IMHO is getting into “attempting to pervert the course of justice” territory.

As for morality – re. NOW clearing the messages, apart from being destruction of police evidence, “this had a devastating effect: when her friends and family called again and discovered that her voicemail had been cleared, they concluded that this must have been done by Milly herself and, therefore, that she must still be alive. But she was not. The interference created false hope and extra agony for those who were misled by it.”

“The Dowler family then granted an exclusive interview to the News of the World in which they talked about their hope, quite unaware that it had been falsely kindled by the newspaper’s own intervention”

And NOW was quite happy to take up their offer and not mention their role in giving them false hope.