Australian Bureau of Statistics figures out this morning give no indication of the employment boom that some economists are keen to predict will soon fan an inflationary fire.

No sign this morning of a jobs boom. Australian Bureau of Statistics figures out this morning give no indication of the employment boom that some economists are keen to predict will soon fan an inflationary fire. 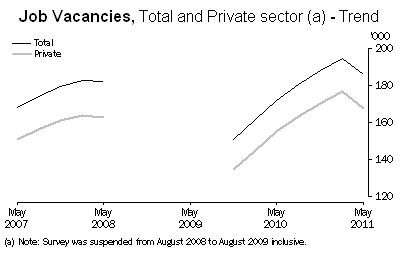 Is wind power too dangerous for America? News cycles are a strange thing and not just the 24 hour trivia variety beloved of parliamentary press gallery journalists. There is an ebb and flow over lengthy periods of how the media treats serious subjects and global warming is a case in point.

Right across the globe, it seems, there are times when global warming is considered to be news and times when it is not. The surveys by the Center for Science and Technology Policy Research (CSTPR) at the University of Colorado-Boulder of stories appearing in a selection of the world’s major newspapers (you will find a list of them here which includes The Australian, The Sydney Morning Herald, The Courier Mail, The Daily Telegraph and The Age) show that internationally coverage is well down from the peak levels of late 2009.

A similar analysis by Drexel University professor Robert Brulle of coverage on the CBS, ABC and NBC networks in the United States shows a similar decline from a high point in 2007-08. Yale University polling expert Dr. Tony Leiserowitz attributes part of a drop in public understanding of climate science since its fall 2008 peak to the collapse in media coverage. In an interview with Climate Science on on public attitudes toward climate science and policy he commented:

“I think underappreciated, is the role of media coverage. We have colleagues who study newspaper coverage as well as television coverage, and they have found that, since 2007, newspaper coverage of this issue has dropped to less than one-third of what it was in 2007 and television coverage, things like the “CBS Evening News,” has dropped to less than one-fifth of what it was back then.

Most Americans know about this issue through what they encounter in the media. They don’t know climate scientists. They don’t read the peer-reviewed literature. They learn about this issue, which is invisible to most of us, through the media. So when the media doesn’t report the issue, it is literally out of sight. So that’s what we think has played an important role.”

What does keep getting reported in Australia are the views of a coal industry concerned at the consequences of the government actually doing something to curb carbon dioxide emissions. Perhaps the industry should enlist the help of The Onion website which has come up with this little gem of a comment on the use of wind as an alternative energy source. Sharing the burden the British way. Public servants in the UK are going on strike as the austerity minded Conservative Government proceeds to reduce the pension rights of its employees. This morning The Independent gave a little context to the complaints of the workers: Greek enthusiasm. The reason that the Government of Greece came to the brink of extinction as the streets of Athens filled with rioters yesterday was that a second financial bail-out was needed because that very very same Government was not able to fulfill the promises it made to secure a first one. Just something to keep in mind before assuming that all now will be well on the international financial front.

Promises by politicians — even when passed through a parliament — are easier to make than keep.

Pakistan not the only nuclear concern. To the worries about the safety of Pakistan’s nuclear arsenal that was in Tuesday’s snippets we can add a wrinkle in our brows for Moldova.

The BBC reports that Moldovan police have arrested six people suspected of trying to sell a type of uranium that can be used in nuclear weapons.

Those held wanted to sell more than 1kg (2.2lb) of uranium-235 with a value of at least $20m (14m euros; £12m), an official said. The were conflicting reports as to whether the men were accused of trying to sell the uranium to an African country, or to an African national.

Now that is interesting. The average British M.P.’s pension is around Aust $38,000. No wonder they all want to hang on to those seats in government in Australia. Our lot get extremely generous treatment even compared to U.S. Congressmen and we, the suckers,(sorry, voters) let them get away with it.

Pakistan not the only nuclear concern: Yes well late in 2009, two employees smuggled out around 170 kilograms of yellowcake from the Rossing Mine in Namibia – Rio Tinto’s JV with the Iranian government. I imagine that while yellowcake alone is not considered potent enough for a so-called “dirty bomb” — a conventional explosive that disperses radioactive material could be used to cause significant panic.

Wikileaks: “A leading atomic regulator has privately warned that the world stands on the brink of a nuclear 9/11 if stores of uranium and plutonium were not secured against terrorists . ”