Word has reached Crikey that a group of well-meaning Age types have organised a shindig for the departing subs, artists and designers, but management have foiled the farewell fiesta. Plus, other media news of the day.

Farewell party divide at The Age. Word has reached Crikey that a group of well-meaning Age types have organised a shindig for the departing subs, artists and designers tomorrow night at the Saint & Rouge bar in Little Collins Street. They got in touch with those flung far and wide as a result of the latest Fairfax penny-pinching. All too easy.

Then they had a brainwave. Why not ask management if it would kick in some dough to perhaps ease the pain of those smashed by the redundos. And so it came to pass. The next thing they knew, there was a message to staff from management, saying there would be a rival “drinks in the boardroom” farewell on the same night as the Saint & Rouge event. They’d been back-doored. Well thought out it was, too, this management soiree. It would be done in two shifts … perhaps management was thinking of it as a bonus for the departed (as in one last extra shift at their cherished Age).

Problem was that the message was sent only to those still in the building. Others who have already moved on to greener pastures would have to rely on word of mouth. There’s also the problem of access to the almost new but fast-emptying (some say you can hear an echo in parts of the building) Media House HQ. Those already gone no longer have the once-cherished security pass. Perhaps editor-in-chief Paul Ramadge could make some time available to physically sign in whoever decides to take advantage, for one last time, of The Age‘s largesse.

Crikey will report back on Monday on the numbers at the duelling events. Our money is firmly on the pub booze-up being the big winner on the night. — Andrew Crook

A 16-word article. Is this a record by the Herald Sun today? Have Crikey readers seen a more (or should that be less) tweet-sized contribution to print journalism? At  least it wasn’t about something as trivial as the Royal purse. Oh wait … 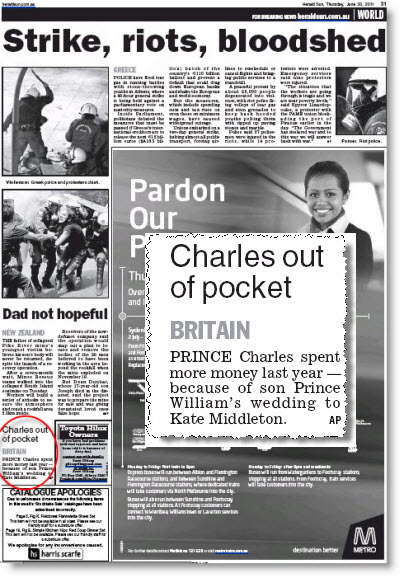 Tom Petty’s election copyright challenge. Oh, this is going to be a great US election campaign. Fresh from celebrating her birthplace as embodying American values due to being the home town of John Wayne (John Wayne Gacy as it turned out, the serial killer), Michele Bachmann has been hit by the usual Republican smash-up — using music the artist in question hasn’t authorised. In this case it”s Tom Petty, whose upbeat rocker American Girl is tailor-made for political campaigns — tuneful, bouncy, boomer/gen-X friendly, and very, very white.

Indeed Hilary Clinton used it in 2008 — with permission. Bachmann doesn’t have it, and Petty’s lawyers have now sent a cease-and-desist letter. Why does the GOP keep doing this, ripping off tunes? For obvious reasons — the liberal left has all the good music; sticking to Republican rock leaves you choosing between Ted Nugent and braindead Country. But the weird thing about American Girl is the chorus, which reveals the Girl’s Americanness:

Oh yeah, all right
take it easy baby
make it last all night
She was an American girl

Yes, vote for me. I’m an American girl, I go like a train. Most curious. — Guy Rundle

Front page of the day. There’s something about an ominous shark fin being seen at popular beaches that is so damn scary: “MySpace, the long-suffering website which the News Corporation bought six years ago for $580 million, was sold on Wednesday to the advertising targeting firm Specific Media for roughly $35 million. The News Corporation, which is controlled by Rupert Murdoch, had been trying since last winter to rid itself of the unprofitable unit, which was a casualty of changing tastes and a cautionary tale for social companies like Zynga and LinkedIn that are presently enjoying sky-high valuations.” —  The New York Times

“Looks like Justin Timberlake took his The Social Network role to heart. The singer and actor will have an ownership role in MySpace and will help develop the site’s creative direction and strategy, Specific Media announced on Wednesday shortly after buying the company from News Corp.” — The Wrap

“For government officials in Huili, a distinctly modest county in a rural corner of south-west China, attracting national media coverage would normally seem a dream come true. Unfortunately, their moment in the spotlight was not so welcome: mass ridicule over what may well be one of the worst-doctored photographs in internet history.” — The Guardian

“Eighteen months after they were abducted in north-eastern Afghanistan, French journalists Hervé Ghesquière and Stéphane Taponier have been released, French President Nicolas Sarkozy confirmed Wednesday. Ghesquière and Taponier, along with their Afghan translator, fixer and driver were kidnapped December 30, 2009 in the mountainous Kapisa province northeast of the Afghan capital of Kabul.” — France 24

“A dispute between staff and management at Newsquest titles in south London has been resolved, according to the National Union of Journalists. Journalists at titles in the area, which covers Surrey, Sutton and Twickenham, have been working to rule since 15 April. They were two days into a four-day strike, their second round of industrial action, over a number of issues including planned reductions in editorial space and redundancies.” — Journalism.co.uk

Re: Tom Petty’s election copyright challenge. “American Girl” always reminds me of the film “The Silence of the Lambs”- Brooke Smith’s character Catherine Martin is singing the song just before she is abducted by Buffalo Bill. Still, goes along with Bachmann’s whole “serial killer” theme.

The left definitely rocks harder but when it comes to the roll, you’d be mad to pass on a bit of sweet toryette.