Australians are the happiest people in the world, apparently. Try telling that to our politicians.

“Australians are the happiest people in the world, according to an index measuring quality of life compiled by the Organisation for Economic Co-operation and Development. The ‘better life initiative’ index compares all 34 OECD countries against 11 criteria including income, health, education, work/life balance, safety, governance, environment, housing and life satisfaction. The results show Australians are the most satisfied with their lives… The OECD concludes that Australians performed ‘exceptionally well’ in key measures of wellbeing. It finds household income in Australia exceeds the OECD average, as does life expectancy and general life satisfaction.” — The Australian, June 28

“…in households around the country, around the kitchen table, people are looking at the bills and are finding it pretty tough.” — Prime Minister Julia Gillard, June 28

“I do not think you are rich. I know you are struggling under a rising cost of living. And I know you are sick of a government that doesn’t get value from your taxes.” — Tony Abbott, budget reply speech, May 12

“Optimism about the outlook for the economy and Australia’s standard of living in the first half of the new financial year has slumped to the levels of the global financial crisis in 2008. Pessimism about the future has jumped markedly since the beginning of this year, although it is not as bad as it was during the global financial crisis and most people still think their standard of living will remain the same… According to the latest Newspoll survey of what people think about their standard of living in the next six months, conducted exclusively for The Australian last weekend, the percentage of people who think it will improve has dropped since January from 18 per cent to 12 per cent.” — Dennis Shanahan, The Australian, June 29 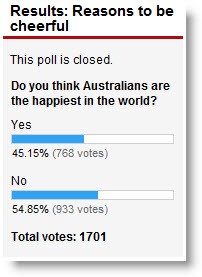 Someone better tell the OECD …

Of course happiness is relative. Politicians want us to be unhappy so they can sell us potential future happiness. However I bet we are feeling on average a little happier than say Greeks just at the moment or even the Irish with 15% unemployment or the rest of Europe with continuing economic woes or … hmmm I’m starting to feel better already.

Of course we are happy, because we don’t actually have a clue what is going on. “Where ignorance is bliss tis folly to be wise.”

Raises the question what makes people happy, doesn’t it?

Not, I’d suggest, the stuff and thing measures comprising much of the OECD index. Once you’ve got enough to eat and a secure roof over your head what’s left?

But I’d suspect that these little individual measures of material wealth could even be in inverse relationship to the things that actually make us happy in any meaningful sense.

How about some interesting measures like family relationships, friends, social interactions, number of arguments… that sort of thing? Bit harder to put on a graph I guess.

Alan Jones makes his living by feeding the outraged grievances of his battlers on “struggle street”, he inflames a sense of suburban isolation, of disappointed entitlement, of a generalised sense of dissatisfaction… that things aren’t as good as they “should be”, as “good as I deserve”. And it all has very little to do with material living standards as they are traditionally conceived by economists.

They don’t call economics the dismal science for nuttin, you know.