The Courier Mail has long complained about Nine’s commentary box, stacked with one-eyed Blues Ray Warren, Peter Sterling, Phil Gould and a Johns brother or two. Gyngell was having none of it yesterday, insisting they’re “the best in the business”. But his wife disagrees — she’s been recruited by the Snail to take lobbying efforts to the bedroom. The paper reports: 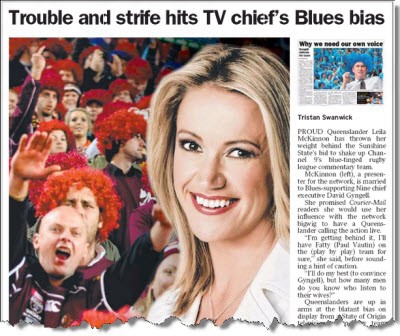 “I’m getting behind it, I’ll have Fatty [Paul Vautin] on the [play by play] team for sure,” she said, before sounding a hint of caution.

“I’ll do my best [to convince Gyngell], but how many men do you know who listen to their wives?”

Amid the cheers for both sides, the sound of women everywhere cringing …

Bachmann’s killer presidential start. Crazy lady Republican making mad gaffes while running for president — has the divine Sarah finally nominated? No, it’s crazy lady Republican No.2 Michele Bachmann, launching her presidential nomination campaign in Waterloo, Iowa, the town of her birth, noting that it was also the birthplace of John Wayne. JAHN WAIYNE?! Really? Erm, no. The Dook was born in Winterset a coupla hours away.

Waterloo is associated with John Wayne Gacy, the notorious serial killer, who doubled as “Pogo the Clown” at children’s parties, and became, in prison, a much-collected artist. Though he committed his 30-plus r-pes and murders in Chicago, it was in Waterloo that he was first arrested. You can be sure as hell  the town didn’t want to be reminded of that, nor the suggestion that the place thereby embodied American values. And that was the Bachmann campaign, day ONE. — Guy Rundle

Computer says NO. From ABC opinion site The Drum. Speaks for itself, really …

Front page of the day. The New York Post can’t — nay, won’t — let this story (and the opportunity for a headline) go: The Department of Corrections. Getting one’s facts correct in journalism is often a matter of life and death. From today’s Phillipine Daily Inquirer:

Will The Guardian bring down Rupert Murdoch?

It is now well documented that employees of Murdoch’s News of the World British tabloid eavesdropped on the voice mail messages of practically anybody who was anybody in Britain for the better part of the last 10 years. Although this might not have seemed like much of a crime while it was being committed by myriad News Corp reporters, and sanctioned by their bosses, it has since transmuted into a profound breach of the civil trust. — Adweek

“To celebrate is 65th anniversary, Penguin has launched an iPhone app for literature fans that aims to be what Urbanspoon is for foodies. The app includes a ‘Discover the Classics’ section that lets users pick classics to read based on their interests. Users can shake the phone to get a book recommendation.” — Mediabistro

“The World Association of Newspapers and News Publishers (WAN-IFRA) and the World Editors Forum have called for a thorough investigation into the slaying of Mexican journalist Miguel Ángel López and his family, and have protested to President Felipe Calderón against the culture of impunity that surrounds the murder of journalists in the country. — Editor & Publisher

“For whatever reason — be it covering protests, phone hacking or the commonly used disturbing the peace charge — journalists and jail cells aren’t exactly strangers. Some journalists are arrested for simply doing their jobs in difficult areas while others are actually breaking the law. With that in mind, here’s a list of some of the more prominent cases of journalists arrested in June alone.” — 10,000 Words

“It was just supposed to be a three-hour tour, um, quick sale process! But, like a storm-tossed ship looking for any safe harbor, the Myspace sale is still chugging along, with a deal that continues to be tossed around among low-paying and new lesser known buyers who are now in the $20 million to $30 million range, said sources close to the situation.” — All Things D

“Google is challenging Facebook domination by unveiling a new project called Google+ that it says will try to make online sharing more like real life. More than a year in the works, Google+ lets users share things with smaller groups of people through ‘circles’.” — The Guardian