Liberals in search of the case for IR reform

Since IR reformers won't explain why we need it, we've looked at what WorkChoices accomplished. It wasn't much.

Now that Tony Abbott has been forced into an industrial relations policy — recall that he literally had no policy on the issue last year, in a mostly successful attempt to defuse the threat of WorkChoices — it will be intriguing to see how the Liberals sell the need for industrial relations reform.

As Crikey has repeatedly pointed out, so far Labor’s IR framework has accommodated the return to near full employment without any surge in wages growth or rise in industrial disputation levels. Under the Fair Work regime, the economy is producing hundreds of thousands of jobs with no wages explosion and no surge in strike action as workers and employers tussle over the spoils of the recovery.

Rather than deal with actual data, IR reform advocates have retreated to nebulously claiming that the Fair Work regime is hampering productivity, although without providing examples. A classic case is Alan Mitchell’s op-ed piece in today’s AFR (which, even more than The Australian, reflexively advocates IR reform without any evidentiary basis). “Gillard’s industrial relations reforms will add something  to wage inflation,” says Mitchell, but provides no further elaboration or evidence to back it up.

The only IR reform advocate to try to furnish an example has been veteran conservative spinner Ian Hanke, who in writing for the HR Nicholls Society claimed Fair Work Australia’s decision on 90 minute shifts demonstrated the inflexibilities of the current system. The problem is, the decision demonstrated quite the opposite, which is why employers welcomed it.

What about other examples of the problems of Fair Work? Well, Hanke didn’t wish to, or couldn’t produce, any. He tries to link the number of long-term unemployed and under-utilisation of labour to the current regime, without acknowledging that other factors, like the continuing decline of the manufacturing sector, or the flatness of the retail sector, might also account for under-utilisation.

Reform advocates cite no less an authority than Productivity Chairman Gary Banks on the importance of IR reform. And indeed, last December, Banks declared that IR regulation was crucial to productivity. It is “vital to ensure that regulations intended to promote fairness in Australia’s workplaces do not detract unduly from their productivity,” Banks said. Well, indeed — this is merely a statement of the obvious. But Banks didn’t give any examples either.

Indeed, he doesn’t specifically address the Fair Work framework. Banks’s biggest complaint about IR reform is the lack of regulatory impact statements made for them — a complaint that could be directed more at the Howard government, which treated its own RIS requirements with casual contempt, than the current government.

Labor in office has further strengthened RIS requirements — which perversely are some of the most productivity-sapping internal requirements that public servants face — without any clear benefit, primarily because the RIS process is a particularly elaborate game of tickabox that does nothing to constrain politicians’ desire to regulate.

If IR advocates can’t produce any evidence to back up their calls for reform, let’s reverse the argument and look at what the last round of reform accomplished. WorkChoices was in place for two years, from March 2006 to March 2008. It was the all-you-can-eat option for IR hardliners, unconstrained by Senate crossbenches or, as it turned out, political common sense. What did it accomplish?

And some historical context is needed. Just how big a problem is industrial disputation now? Let’s look at days lost to industrial disputes going right back to the time of the Accord and Bob Hawke: 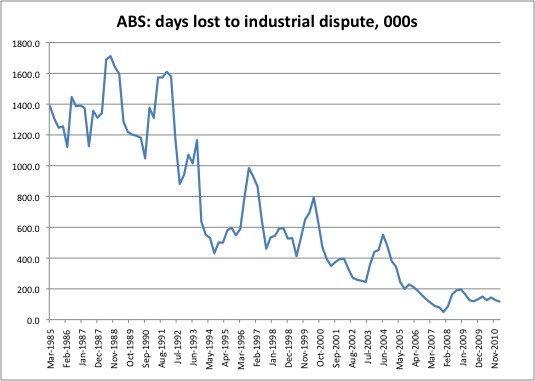 So industrial disputation is now not even the issue it was in the wake of Peter Reith’s reforms in 1997.

What about the cost of labour? This is the ABS’s index for private wages, excluding bonuses, since 1997. 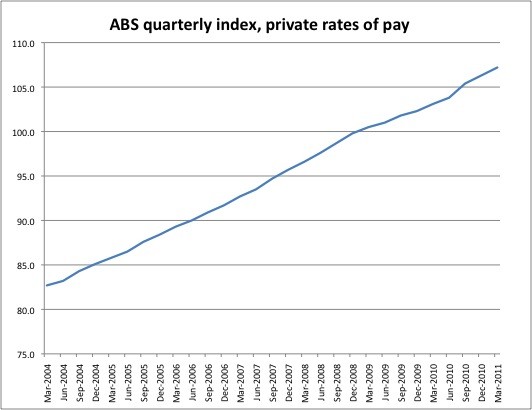 This entirely boring line shows little difference between the rate of private sector wages growth now and under WorkChoices or, for that matter, before WorkChoices. The only interruption to the smooth increase was the impact of the GFC.

What about the more nebulous issue of productivity? Were Australians made to work harder under WorkChoices? That’s the logic coming from IR reform advocates, that more “workplace flexibility” means higher productivity. In February, the Grattan Institute examined the problem of Australia’s falling productivity, finding inter alia that the problem was economy-wide rather than, as some have suggested, a particular problem occasioned by the massive increase in capital investment in the mining industry and utilities.

While the report doesn’t explicitly consider the issue of IR reform, its data on productivity gives us a snapshot of productivity under WorkChoices. The Institute’s five-year rolling average trend for productivity shows that, for the two years of WorkChoices, labour productivity in Australia fell off a cliff, fell further in 2009, and has since recovered slightly. 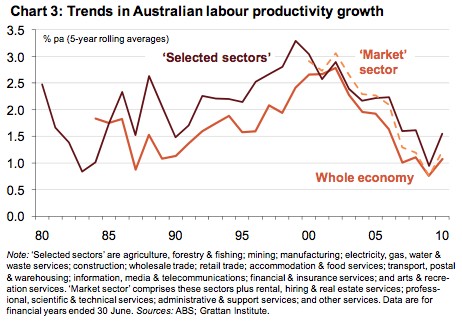 Now, one can argue that WorkChoices wasn’t given long enough to really yield significant benefits, that a two-year experiment wasn’t long enough, and cruelled by the Howard government reimposing a safety net feature under political pressure. And there’s a case for arguing that the big drop in productivity under WorkChoices was more because of capacity constraints in a booming economy and the entry into the workforce of lower-skilled, less productive workers because employers faced a tight labour market — as long as you’re prepared to identify the same contextual factors at work under the current system.

But the problem is that IR reform, as the chart for industrial disputes shows, is now the lazy reform option. Attacking unions’ rights and empowering business to gouge unskilled workers — the two basic features of WorkChoices — aren’t going to restore Australia’s flagging productivity. The Hawke, Keating and early Howard government got all the low-hanging reform fruit.

Now there are more complex challenges like infrastructure investment (and charging for infrastructure), lifting the return from our health and education investment and the “human capital agenda” which the Howard government, under pressure from the Bracks government, belatedly recognised as important to lifting productivity.

That said, there may indeed be a case for overhauling aspects of the Fair Work regime. No legislative framework is perfect. The problem is, IR reform advocates keep insisting it’s broken, but can’t or won’t say how or provide any evidence for it.

What in the name of Don Bradman’s cover drive is going on at Cricket Australia?

Is “Productivity Chairman Gary Banks” the same Gary Banks who ran a successful professional personnel placement firm up until the 1990s?

I dispute that Australia has returned to near full employment because the unemployment rate is determined as people who were actively looking for work did not have an hour of work paid or unpaid in the survey period. The ABS also keeps track of underemployment, recognising that many “employed” rely on Newstart of $234 per week to provide and income or top up their income.

About 25% of Australian workers are employed casually, yes it includes university students working in retail and hospitality but also many professional people who are hired at the start of a shift like nurses, teachers and miners. These workers the requisite training, registration and experience are expected to perform their duties in a professional manner. Casual teachers in Victoria are paid $256 per day but after paying agency fees they are likely to take home $176. They deserve a better deal than the proposed by HR Nichols Society.

DIRECT ACTION IS A FIZZER so back to core business arguing that the screws be applied to workers.
As it is Australians now work longer hours than many other countries, the weekend is dead, our kids are working 2 and 3 jobs with no security as a standard.
WHAT MORE DOES REITH WANT?

The problem is, those comforting economic indicators you cite, such as full employment and low (official) inflation, are caused not by productivity improvements but by things like resource price increases and immigration. Look beyond those figures to “total factor productivity” (TFP, i.e. cancelling out the effects of changes in population and global markets) and it’s a different story, as RBA Assistant Governor Philip Lowe said late last year.
[“But of course, everything else is not constant. In particular, total factor productivity growth has slowed significantly over the past decade. Indeed, according to the national accounts, almost all the growth in output since the early 2000s has been accounted for by growth in labour and capital inputs, rather than by improving the way we use that labour and capital.”]
(( rba.gov.au/speeches/2010/sp-ag-081210.html ))

Without TFP improvements, Australia is just riding the currents and hoping our luck lasts. TFP can potentially be increased by microeconomic reforms such as smoothing out tax distortions and increasing labour market flexibility, and by investing strategically in common productive assets such as transport infrastructure and better urban design. If done right, the effect of these is to maximize economic competition throughout the system–including both competition for the best workers and competition by workers for the best jobs–and it is competition that leads to real productivity increases.

@ FC […The problem is, those comforting economic indicators you cite, such as full employment and low (official) inflation, are caused not by productivity improvements but by things like resource price increases and immigration.]

I notice FC you conveniently ignore the almost halt in stoppages due to industrial action and the very modest rise in rates of pay. Conveniently apple picking those that suit your line huh?
Excellent article Bernard and there is no doubt Abbott has two fronts attacking him now, the Reith mob and the Turnbull mob. His continual lies and negativity will be the undoing of him.