Applauding statements of the obvious

It's eloquent testimony to the state of the debate over a carbon price that a statement of the obvious by NAB's Cameron Clyne is newsworthy.

It’s eloquent testimony to the state of the debate over a carbon price that a statement of the obvious by NAB’s Cameron Clyne is newsworthy. So wretched has been the contribution to the debate on climate change action from Australian business and so distorted has the debate become that Clyne’s simple remark that a carbon price would drive certainty and investment seems like a breath of fresh air.

However, another of Clyne’s observations is more significant. He correctly notes that if a carbon price does not eventuate, the issue will not go away; rather, the debate about how to curb Australia’s emissions will have to continue. We are currently on a trajectory to well overshoot the bipartisan commitment to reduce our emissions by 5% by 2020. Even with a carbon price, it will be a struggle just to meet that unambitious target. Worse, the Coalition’s misnamed “direct action” plan will do nothing to curb emissions, but in essence pay business to lock in exactly the business-as-usual trajectory we are currently on. Climate change, the need for international action to reduce or curb growth in emissions, and Australia’s role in that action will remain as major policy issues regardless of what this current generation of risk-averse politicians decide to do.

Clyne appears to understand that delay significantly increases the costs of the actions we must take, better than many of our leaders in Canberra.

Meanwhile, it turns out you really do prefer Prime Minister Gillard. Well, that, or you didn’t take our fake poll in the spirit it was intended. Gillard rated second on our reader poll for preferred Labor leader. Roughly five percentage points below, er, the Emperor Penguin that washed up in New Zealand…

And the lucky recipient of the promised Cooty Notes goes to @katinacurtis for this sharp observation:

Dear @crikey_news if we answer your Labor leader survey and it doesn’t ask our name, how do we win Cooty Notes? #sooky #ineverwinanything 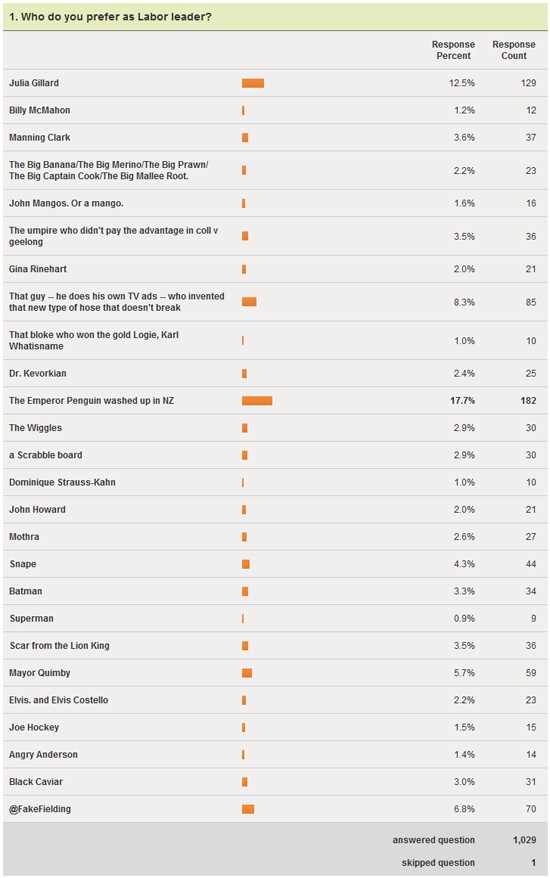 good to see that @fakefielding polled so well. Perhaps a career in politics is not off the cards after all (although he will have to get that checked off by fakeSusan).

Thank God the emperor *does* have new clothes, and he even wears a spiffy dinner jacket. 😀

Superman slumps to last place. How ignominious to be beaten even by Karl Stefanovic an Dominique Strauss-Kahn

Crikey- the most biased and tendentious media organisation of all…tireless climate millenarians, giving space frequently to the most rabid climate zealots and denying any space whatsoever to doubters of any ilk.

Crikey, the Mad Monckton of the climate cult.

Crikey’s chagrin at the failure of the rest of the progressive media to maintain 100% ridicule/exclusion of doubters or critics is obvious. Anger at the ABC, Fairfax etc is now common on Crikey.

What will Crikey do if the Naked Priest rules for a decade and locks “climate action” in a cupboard?

With luck, this obsession will then give way to exposing the daily degradation of the real environment, largely absent now.

This seems a trifle unfair “regardless of what this current generation of risk-averse politicians decide to do.”

It strikes me that the Labour leadership in particular Gillard is currently way out on a limb over this very issue – not exactly risk averse I would say.

And I have certainly heard Gillard, Brown, Garnaut, BHP Chair etc etc frequently talk about to exactly the same issues that Clyne espoused so it’s not clear why you make him out to be the saviour of clear talking.

Personally I think this message is just continually muddied by the media, the opposition and the usual rent seekers.

One example of how this is happening is that for every news story on Radio National they always seem to include a soundbite from the Opposition as the lead or the close or the “headline”. What is that all about? Do the Opposition have some one embedded in the ABC newsroom insisting on airtime?