When you picture Julia Gillard in cartoon form, what comes to mind? Her pointy nose? Her flaming hair? Her receding chin and long neck? Or her bum?

When you picture Julia Gillard in cartoon form, what comes to mind? Her pointy nose? Her flaming hair? Her receding chin and long neck?

I feel oddly alone in never having thought much about Gillard’s bum. But a year into her prime ministership, perhaps it’s time to muse on what The Australian cartoonist Bill Leak calls her “ass-cent to the leadership, euphemistically, of course …”

In a video on The Australian’s website, Leak draws Gillard as an old-fashioned bomb, with a completely round body. 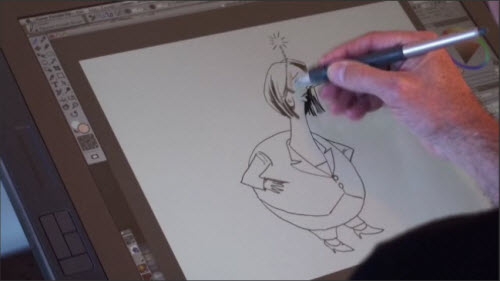 A recent cover of The Spectator Australia depicts her with mighty haunches, as if viewed from below; she’s a destroyer of cities, like Godzilla or the 50 Foot Woman: 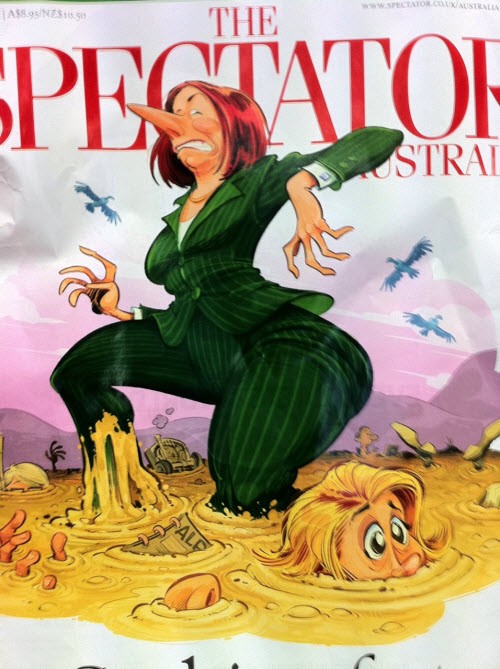 Meanwhile, Peter Nicholson (also of The Australian) has given her the biggest rump of all: 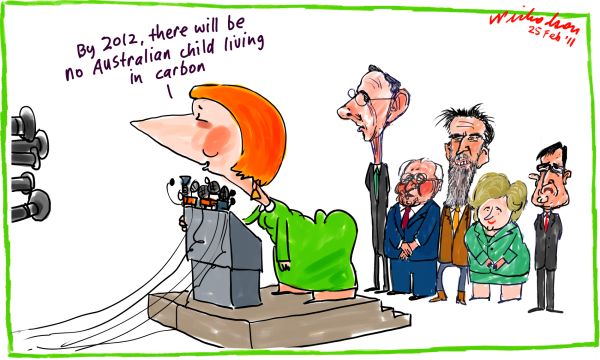 It would be easy to conclude there’s something sexist about this. But prominent Australian cartoonists assure Crikey it isn’t quite so simple.

“Caricature involves singling out features disproportionately. Who’s to say which features you can and can’t emphasise?” said The Sydney Morning Herald’s Cathy Wilcox. “If they serve to make the subject recognisable, then it’s legit. Do you remember how Bill Hayden’s nose used to be depicted looking awfully like a penis …”

For Age contributor Oslo Davis, “Howard’s puny little body in a green and gold tracksuit, by Leunig, springs to mind, as does Tandberg’s massive coif on Kennett. We want them to look like goons, especially if they strut about like roosters — or hens! But it’s never the reason for the cartoon.”

“Mostly what sexism there is in cartoons these days is probably unconscious,” said freelancer Judy Horacek. “Cartoonists now have had the chance to draw a lot more powerful women, so they have more practice at it. Unlike from other sections of the media and the general public – Brown’s Bitch and Tony Abbott’s ‘honest woman’ comments, et cetera – in the cartoons, Gillard’s femaleness or use of some cliched female behaviour isn’t part of the message of the cartoon itself, unlike the way it used to be.”

Jason Chatfield, who draws Ginger Meggs and is president of the Australian Cartoonists’ Association, has noticed that Gillard’s cartoon posterior has expanded during her prime ministership, much as Kevin Rudd’s head did during his tenure.

“It’s not specifically that she has a big derriere; it’s simply that her figure lends itself to distortion at that end of the scale. She has a tiny head atop a bottom-heavy body.”

Horacek told Crikey that caricatures of women carry an extra layer of meaning, because women are seen to derive authority and speaking position on the basis of their physical appearance. “It reads differently to show a battered woman than a battered man, to show a woman in bed with others than a man in bed with others – in the latter it signifies equals doing a deal; in the former, not so much.

“I’m not sure all cartoonists think this through — they can be guilty of using the same visual metaphors they have always used, without thinking if the whole picture reads differently because the protagonist is a woman.”

Freelancer Fiona Katauskas told Crikey that Gillard has definitely “copped it harder” in politics and the media. “There’s been a lot of nasty digs at her childlessness and a general lack of respect men would not be subject to.

“However, I’m not sure that her caricature is worse. Perhaps because there is so much focus on women’s appearance in general, when they’re portrayed unflatteringly it’s more noticeable.”

This cuts to the essence of political caricature. The notion of an “unflattering” likeness implies that cartoonists aim to personally compliment or wound the subject of their work; in The Australian’s video, Leak wonders how Gillard feels about the way she’s depicted.

“Julia Gillard has done us all a favour, as, from the very beginning of her term, she let the whole gender thing just wash off her,” Wilcox told Crikey. “I felt a sense of her robustness — that she wasn’t going to cry herself to sleep because the boys (or girls) had been mean.”

Is it intrinsically demeaning to emphasise a woman’s bum? “Only if you think that having a big bum is a terrible, cursed thing,” says Wilcox. “I don’t think it is — it’s just one of the many shapes and sizes we come in. Now, because it’s a bum, and it’s a woman, people get sensitive. Is it sexist to depict a woman, with womanly features, at all?”

Katauskas agrees with Davis that a good caricature always “illustrates — pardon the pun — the point. For example, Howard’s distended lip as a symbol of his determination and stubbornness, or drawing Rudd as an empty balloon head.”

Speaking of First Dog On The Moon’s work, it’s striking that his satire rarely riffs off politicians’ actual bodies. By depicting them instead as cuddly anthropomorphic animals, First Dog’s satire seems less personal, and can actually be more savage.

Australia has no official ethical standards for cartoonists. “They would have to be re-written so often that we’d run out of internets,” says Chatfield.

“It’s generally accepted that they know where to draw the line — I’ll wear that awful pun — when it comes to taste. That said, many cartoonists test the water all the time to see where the borders lie. They shift over time in tune with cultural shifts.”

Self-defined naughty boy Leak, particularly, likes to test those boundaries. Last year I was dismayed by his response to the Christmas Island asylum-seeker shipwreck, and this reaction to Barack Obama’s election seems similarly provocative.

Another member of the Australian cartooning community, who demurred to speak on record, told Crikey that issues of taste can arise when freelance cartoonists work away from newsroom culture. Their barometer of what’s funny and relevant becomes “their mates down the pub”, and their sole “safety valve” is the opinion of their commissioning editor.

“Cartooning is like writing, it’s a tool; it can be used honourably or dishonourably,” says Horacek. “A lot of things get done in the name of satire that aren’t thought through properly, with then the defence of ‘what’s wrong with you, can’t you see that it’s satire’.”

That said, cartoonists are an empathetic bunch. Several pointed out to Crikey that there are always slow news days, or periods when inspiration just won’t strike.

So, if not her bum, what’s actually the funniest thing about Gillard? Oddly, the cartoonists Crikey interviewed all seemed to emphasise her avian qualities.

“She has many great, drawable features,” says Wilcox, “and the puzzle is to prioritise them, while getting them to fit together. She’s the opposite of Kevin Rudd, who’s mostly soft, round and featureless. I’ve got her down to nose and hair, and a fairly duck-like physique.” 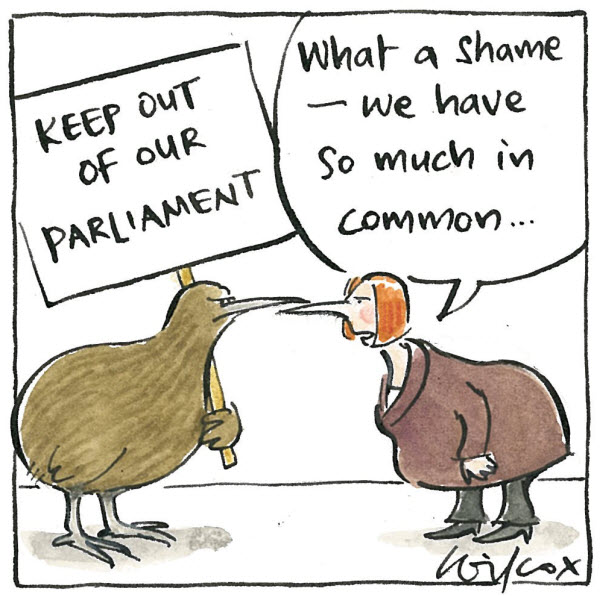 Davis has a similar idea. “She does look a bit like a hen these days. If I was to draw her, I would draw her pointy nose, red hair, and her hen-like body.”

One of the best Gillard cartoons Chatfield has seen is by Melbourne cartoonist Luke Watson — “immediately recognisable and perfectly minimal” — and says the Herald Sun’s Mark Knight, “caricatures her pre-coached Altona squawk beautifully”.

But despite his “obvious predilection for drawing redheads”, he can’t get past Gillard’s “massive beak, affixed cruelly to the tiny head on a low shoulder line. It really is a free kick to cartoonists after the blandness of her predecessor.”

A time for caution over interest rates

Farmer: Keating shows them how

Costello would have been worth a try

[Australia has no official ethical standards for cartoonists.]
ROTFLMAO
Damn it Mel!! I have learnt to put down my coffee before looking at Firstdog’s work. But that particular sentence just caught me by surprise and sent a tsunami of brown stuff all over the keyboard. 😀

I’ll be honest, the question itself ‘Do cartoonists have ethical standards – either official or unofficial – about what is ‘going too far’? Have people ever been expelled from the ACA on such grounds?’ had me in similar stitches. Minus the brown stuff.

(Small footnote: That Spectator cover was drawn by the clever Anton Emdin – http://www.antonemdin.com)

Sorry all! Being a humourless feminazi I am unable to find anything funny whatsoever, and apologise sincerely for any coffee spat out in hilarity during the writing or reading of this article.

FYI Bill Leak is onto the bird shtick too – check out his cartoon in New Matilda today.

I fail to understand why drawing someone as having a large rear end could be interpreted as sexist? Gillard wears a cut of jacket which emphasises and draws focus to her rump – one can scarcely blame cartoonists for highlighting it.

Abbott is frequently depicted as hairy – is his hirsuteness regarded as sexist, too?

Hands off our fine Australian cartoonists.