The world’s biggest refugee camp is getting bigger. Fast. The steady stream of new arrivals at the Dadaab refugee camp has now officially become a flood, writes Rafiq Copeland.

The world’s biggest refugee camp is getting bigger. Fast.

The steady stream of new arrivals at the Dadaab refugee camp — one family is pictured below — has now officially become a flood. In just the past two weeks 20,000 refugees have made their way across the Somali border to this camp in north-eastern Kenya. The numbers are overwhelming. Just last month the total population of the Dadaab topped 350,000. By the end of the year it may well exceed half a million. 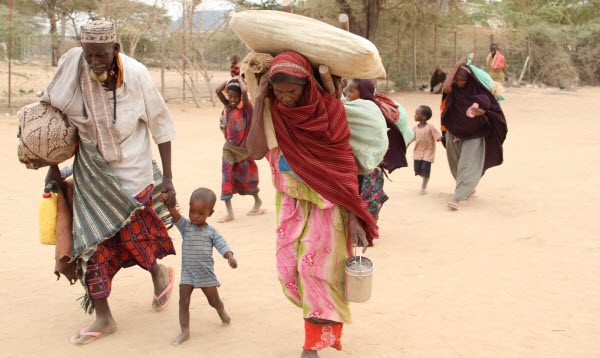 The cause of this influx is a serious deterioration to the situation in neighbouring Somalia. Exactly what life is like across border right now is hard to express. Suffice to say that when the world’s most fundamentally failed state suffers yet another “serious deterioration” it means things are very bad indeed.  Witnesses at the border have described seeing refugees crossing openly in daylight for the first time in 20 years.

The camp they are coming to is a strange place.  Established in 1991 to accommodate refugees from the Somali civil war, Dadaab has since grown into a tented purgatory with a larger population than Canberra.  This sprawling settlement is actually made up of three camps — Ifo, Hagadera and Dagahaley — spread out around a two-bit town in the middle of the desert. An Australian I was speaking to recently described it as “like Tennant Creek — except with 350,000 Somalis camped on the edge”.

But Dadaab is not just home to Somalis. There are also refugees from Ethiopia, Sudan, Democratic Republic of the Congo, Uganda, Rwanda, Burundi and Eritrea — there’s even one or two from Zimbabwe. When you add to this mix the local Kenyan host population, and the cosmopolitan jumble of international aid-workers, Dadaab is an oddly global village for this desert on the edge of nowhere.

Staff of the UNHCR and the countless relief agencies that run this place live under high security in a compound within the Dadaab township. Every morning they go out in convoys to the camps to do their work. A couple of weeks ago, armed-bandits took a relief agency vehicle — so security is taken pretty seriously. Driving to work along these desert roads at high speed as white Land Cruisers, emblazoned with the names of various NGOs,  overtake one another can feel pretty dramatic at times. But then a local bus laden with vegetables for the Hagadera market comes trundling past in the opposite direction and the whole process seems even more surreal than it did before.

There is definitely an element of Dada in Dadaab. A tendency towards anarchy that ridicules the very notion of an organised world. That forces you to ask what all of these people are doing here? Whose idea this was? They can’t work. They’re not allowed to produce anything or earn money. And they can’t leave. So they live in tents and eat corn grown in Iowa. Many of them have lived here for 20 years.

And the amazing thing is that people do live here.  People fall in love, get married, have kids. Despite the law against paid employment, commerce in Dadaab is rife. There is an East African expression that goes “when you have two Somalis you have a market”. Thanks to remittances from family outside of the camp — including the 1% of refugees who are resettled each year — and unquantifiable black market of goods coming out of Somalia, the market is thriving. Kenyan telcos have opened up services in the region and many of the refugees I work with will likely read this article on their phone (something I am unable to do on mine).

Meanwhile, on the edges of the camp a humanitarian crisis is quietly unfolding as new arrivals struggle for survival during the lengthy registration process. The stories they bring with them are almost beyond belief — one shell-shocked family described having six children taken by lions during their journey. Infant mortality through malnutrition and disease has reached unacceptable levels on Dadaab’s outskirts (unacceptable even for a refugee camp that is). Safety and shelter simply cannot keep up with demand.

Yet despite its many problems, Dadaab remains a safe haven for those who are forced to flee here. So I’ll choose a slightly different story to conclude.

A friend of mine here is a poet. Ojullo — a refugee from the minority Gambela ethnic group in Ethiopia — writes wonderful poetry. Last time I saw him he was carrying around a battered book of D.H. Lawrence. Today he was reading Bukowski. I asked him what he wanted me to bring back for him from Nairobi and he suggested Basho, the 17th-century Edo master of Haiku. In this small matter at least, I think I can help.

Attention journalists: there was no Flemington race riot

But mmmmaaaaaaaate, we have 6,000 in our illegal prisons because we refuse to let them out.

We need some fodder for the bogans to poke at.

Such a horrendous situation, but, an excllent narrative, thank you.

Thank you for publishing this. Now I want to know more.

Informative and I too would like to know more on this. In all that horror a man can write and read poetry.

Yes, a most interesting piece. And don’t overlook Bashō – a wonderful poet.