Complaints of political bias at the national broadcaster grab headlines, but it's accusations of favouritism at the footy that can most concern the ABC's complaints department.

Complaints of political bias at the national broadcaster grab headlines, but it’s accusations of favouritism at the footy keeping the ABC’s complaints department busy.

Last year Aunty received 1266 complaints about perceived party political bias, compared with 1470 complaints over bias in other areas — including sport and religion. Because it is publicly funded, the broadcaster has to respond to complaints — some 30,000 last year including program standards, scheduling and transmission issues — within 30 days.

ABC Grandstand chief Craig Norenbergs is the man in charge of personally replying to complaints of sporting bias against his broadcasters. Having worked with Sky News for eight years, Norenbergs says the ABC complaints system is the most stringent process he has ever seen.

Complaints of bias are taken seriously, says Norenbergs. So seriously he has been forced to “forensically” study the calls of his broadcasters to see whether they praise one team or bag another. There were four of these examples this year, none of which were upheld.

Gerard Whateley is one of Grandstand’s senior broadcasters. He heads up ABC coverage of the AFL, as well as providing commentary for the tennis, soccer, cricket and horse racing. He says the level of concentration required to call a game makes it impractical to actively support a team.

“Calling sport is a responsibility, not a personal indulgence,” he told Crikey. “You’re not there for yourself, you’re there for the sports-loving public who trust the ABC as a source of balanced coverage.”

In his private life, the broadcaster is also a supporter of the Geelong Cats, who recently appeared in three AFL grand finals called by Whateley . He says he happily stands by his commentary.

“The old-school way was no one would declare who they barrack for, which runs against the very nature of sport,” he said. “I don’t think anyone makes a secret of who they barrack for these days, so it’s for other people to judge the call from there.”

As well as handling complaints, Norenbergs says Grandstand undertakes regular staff conferences where issues like bias are covered. Cricket is one sport where commentators need to be careful not to barrack for the home side.

“People pick up on it straight away, as much as we are wary when talking up the Aussies we have to also be careful about not bagging the touring side,” he said.

But Norenbergs praised the professionalism of his team: “It is very much like political followers, they often hear that they want to hear. It can be hard in the live call of a footy match, especially in the heat of the moment. But our broadcasters are particularly experienced, so they’re aware of it.”

The ABC’s annual report breaks down the number of “audience contacts”, including 31,410 complaints last financial year. 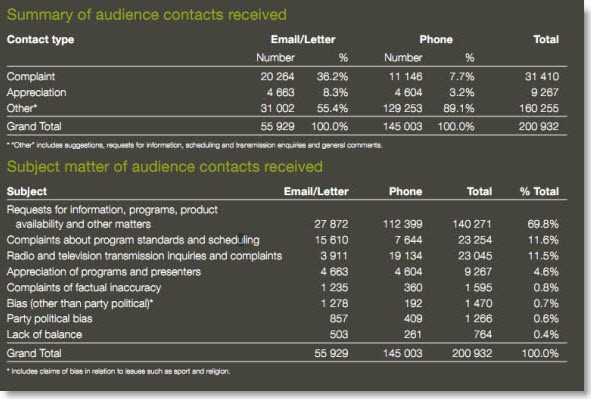 The only difference between the ABC TV and the commercial stations, is that I no longer perceive the difference. Instead of trying to pander to the mob why don’t they have a separate station for the never ending sportscasts? Also they could do away with their never-ending promos and put a flash release of the latest world news, or even tatting lessons. Anything but trogloditic promos for the latest damn Jane Eyre, Wuthering Heights, Dickens incorporated or something written by Emily Brontë. They may be cheaper to produce than making our own. But it shows; I swear I’ve seen a pair of grey horses with an unusual action in more than one show-like a hundred years separating the time spans.

Piers Ackerman is a regular. And the ABC isn’t biased? Week afer week “Insiders” is loaded to the far right. Have a look if you have any doubt. (You’ll only look once!)

CLIFF: Of course the ABC’s biased. Has been ever since John Howard got all of his pals onto the board. Even the newsreader, Ian Henderson, slams the odd comment over the net. Thank heavens for DVDs.

Stopped watching insiders years ago, way too the right.

Offsiders is one of the most biased sports shows I have seen,I assume its based in Melbourne and consists of Cassidy,(AFL Fanboy) Whateley, (another AFL fanboy)
And 2 more simpering AFL lovers,with the addition of Wilson who is AFL houses trained poodle.