The median sentence length was longest for defendants sentenced to a custodial order in New South Wales and the Northern Territory (both 36 months) and shortest in the Australian Capital Territory (17 months).

A better educated lot. You are far more likely to find yourself sitting next to a tertiary educated spectator at  cricket match than at the footy. That’s the finding from figures published by the Australian Bureau of Statistics this morning on spectators at sporting events. And the least educated sporting attendees? Motor sports. 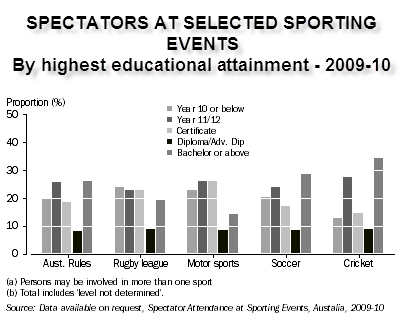 No rate rise expected here. No interest rate rise is expected in Australia when the Reserve Bank next meets. The markets measured by the Crikey Interest Rate Indicator have the likelihood of the official rate remaining unchanged at 91.7% Surely it’s a joke. I read this morning that politicians now think that works of art in galleries should carry PG, M and R+ ratings to stop children being exposed to “crude” artworks. Surely this is just a joke and not a serious recommendation.

The long history of criminalising suicide

Suicide is still against the law in many countries. How did it come to be considered a crime in the first place?

How to get a lenient life sentence

The crime might be the same, but the punishment depends on where in Australia you find yourself standing up in court.