Sun King survival tips: what it takes to be a Murdoch man

There's a long history when it comes to Rupert Murdoch's preferred choice of editors and style of journalism and control.

“You just don’t understand the readers, do you, eh? He’s the bloke you see in the pub, a right old fascist, wants to send the wogs back, buy his poxy council house, he’s afraid of the unions, afraid of the Russians, hates the queers and the weirdos and drug dealers. He doesn’t want to hear about that stuff (serious news).”

Which infamous Murdoch editor said that? The reference to council houses gives the game away that it is British but the philosophy is easy to recognise as typically News Limited. Even though it is across three decades, if you swap in “asylum seekers” for wogs or “McMansions” for council houses, “Greens” for weirdos, throw in indigenous issues, it still works for News Limited today.

It was, of course, Kelvin MacKenzie (Stick It Up Your Punter: Rise and Fall of the ‘Sun in the 1980s) editor of The Sun (at one point the top-selling English language daily newspaper in the world and still selling almost 3 million copies) notorious for tasteless headlines (“Gotcha” and “Freddie Starr ate my hamster”), rabidly partisan politics (Thatcherite), intrusive and smear, vendetta journalism and invented interviews. Despite costing News huge sums in settled law suits, the Sun King himself (Rupert Murdoch) has described MacKenzie as his all-time favourite editor.

Earlier this week Crikey profiled The Australian’s editor-in-chief Chris Mitchell. But Andrew Dodd didn’t put Mitchell within an all-important context, without which he could not function: namely the long history of Murdoch’s preferred choice of editors and style of journalism and control.

As Michael Wolff explains in his 2010 book on Murdoch (The Man Who Owns the News: Inside the Secret World of Rupert Murdoch) the defining feature of many of his editors and star reporters is co-dependency. “This may be because there is really nowhere else to do what they do than to do it for Rupert — no other well-paid corporate outlet for their kind of behavior — and because he relies on them to do what he personally, and temperamentally, can’t do. They’re his weapon, his amusement, his idea of romance. His personal f-ck you.” “Many of his favourites border on the unemployable. They exist only because he lets them exist. These are Rupert’s reprobates.” And, “Murdoch people, are less than top of the class, that they have fewer options — which is why they’re at News Corp and grateful to be there.”

But Rupert has a limit to his tolerance, even for his all-time favourite.  “MacKenzie’s dominance was so total there was nobody left in the organisation who could rein him in except Murdoch.” Eventually after losing a series of million pound law suits amid declining sales of The Sun, Murdoch moved MacKenzie to BSkyB where he lasted a few months, then to LIVE TV where he took the Berlusconi route (topless darts, bikini-clad weather girls, etc) that resulted in the station closing down. He returned to News Ltd in 2006.

Rebekah Brooks gives MacKenzie a run for his money — for editorial and personal behaviour. While editor of The Sun in 2005, she overdid celebrations with Murdoch at a family birthday party and ended up spending the night in jail after her husband called the police to stop her drunken assault on him. She was the editor of The Sun during the phone-hacking episodes and may yet face prosecution, feasibly jail like several of her journalists so far over this scandal.

Some of the top-rating attack dogs at his Fox network have stretched their patron’s patience. Glen Beck has been removed. “At Fox News, Bill O’Reilly, flouting News Corp’s own rules on s-xual harassment, is caught up in a lawsuit that — complete with phone transcripts — accuses him of brutal s-xual stalking and bullying. It was handled internally.” Wolff reports that lately “(Murdoch) barely pretends to hide the way he feels about Bill O’Reilly”.

Then there is “Murdoch’s favourite reporter, his totemic reporter, over the 50 years of his newspaper career is Steve Dunleavy, who worked at News Corp’s Sydney paper, the Daily Mirror (and moved to New York where) he can be found on many afternoons — and mornings — drunk at Langan’s, among the least appealing bars in Manhattan, but where anybody who is anybody at the New York Post stubbornly congregates.”

There are many more. Col Allan, Lachlan’s appointee as editor at the New York Post, whose reputation at Sydney’s Daily Telegraph was used to horrify his New York colleagues into compliance. The incredible and bizarre Judith Regan story. And Roger Ailes, head of Fox and, as Chris Mitchell will know, the only person in the entire Murdoch empire who has “fundamental editorial independence”. He is so aggressive, so bullish and brutal that to others in the top echelon of News Corp “he is a piece of mischief that has gotten out of hand.” Reputedly he is also the only one who intimidates the Sun King.

As Andrew Dodd has written, Mitchell is reportedly obsessed with his legacy. This raises the question, in which of these two groups will history place him?

While most of these lurid histories are from Murdoch’s tabloids (including his invention of tabloid TV, Fox) his quality papers are not immune from his interference or indeed, pathology. The quality broadsheets (The Times, Sunday Times, The Australian, Wall Street Journal) are tolerated in the News stable for one reason only: the power and influence they confer on their owner. (All of them, except Sunday Times and WSJ, which was faltering, have hardly ever made a profit; his other love, New York Post, loses about $50 million per year.) They pursue a consistent political objective and conduct vendettas against political parties, individuals and organisations. Across three continents, they vociferously argue closing down the public broadcasters the BBC, ABC and PBS.

Anyone who has examined the issue knows that their existing (except for The Australian) quality does not mean they escape his control. Despite the vast scale of News Corp’s worldwide operations, Wolff says all his editors live and work in trepidation of Rupert looking over their shoulder.  “He’s almost never there — except when he is, overwhelmingly, there. If you work for Rupert, you do his bidding. You submit to Rupert.” After editing The Oz for Rupert for nine years, I think we can see to which of the above two groups Chris Mitchell belongs.

To return where we started, one of the innumerable controversies Kelvin McKenzie personally created was a mock-editorial on the then UK Labour leader, “Why I’m Backing Kinnock, by Joseph Stalin” and another titled “Mine Führer” with a photo of coal miners union leader Arthur Scargill in a contrived (Photoshopped) Nazi salute. After providing op-ed space as recently as January to one of the world’s most prominent global warming denialists, one wonders if Mitchell will provide the imprimatur of his newspaper again for Lord Monckton’s latest Nazi slurs of Ross Garnaut during his upcoming visit?

And at what point does the court jester cease being amusing to the Sun King? 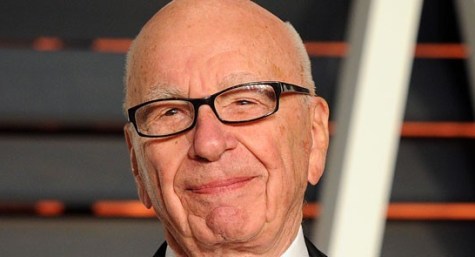 When the SUN KING finally sets, I shall read his obituary with great relish.

It’s a terrible post-mortem slur on Louis XIV. Could we go with “Sun Dial”, for something reliably out-of-date?

keep it coming, this is the juice. Vendetta journalism. Quite. Virtually unemployable – Piers Akerman? Andrew Bolt. Their grip on reality is highly questionable, cartoonish, unrestrained, always high energy and generally wrong. Rupert must be so very bored to play with these lightweights for so very long.

And he got it totally wrong on Iraq. At least his mother got it right on climate.

There have been various scribblers who’ve moved from Fairfax to the Limited News (Augean) stable, Miranda unDivine & current wannabe Paul Sheehan, but can anyone recall someone going tuther direction?
Robert Manna is about the only example I can conjure of someone moving Left.
As the old saw has it, “if you are not a socialist at 20, you have no heart; if you still are at 30 you have no brain”.