It’s not a comedy

In the wake of Joe Hockey's 'cardboard Kevin' antics, here's a free hint to any politician chasing some respect from their voters: don't do comedy.

One year on from that night, and the government’s polls are more poisonous than ever. But one key player, who hasn’t got nearly enough credit in all the gory, entrail-like imagery doing the rounds this week — Mr Abbott — ain’t exactly Mr Popularity either. After all, he’s only  just edged over the line for preferred PM, despite the coalition’s huge 2PP lead.

All of which tells us the same old thing: the Australian public loathes its politicians. Why?

@JoeHockey: The ghost of @KRuddMP is making guest appearances all day today the first anniversary of his political assasination…where will he be next?

@KRuddMP dropped into my office to say hi. 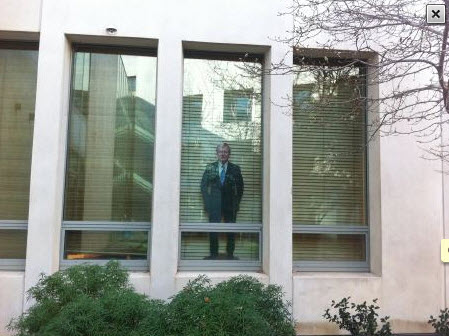 And so it goes…

@JoeHockey Then @KRuddMP decided to drop in to say hi to his friends at the Indonesian embassy. http://yfrog.com/h8hkrtavj

@JoeHockey After a long day of travel @KRuddMP decides it is time for a rest at Aussie’s in Parliament House http://yfrog.com/kezo5xyj

It keeps going, all day and into the evening in fact, but we can’t be bothered.

Here’s a free hint to any politician chasing some respect from their voters: don’t do comedy. Voters expect their local member’s office to at least pretend to be preoccupied with the business of government. Save for question time, of course.

This confirms my long held suspicion that, although Joe Hockey may appear avuncular and harmless, he’s politically naive – if not plain stupid.

Are you sure these tweets didn’t come from an 8 year old by the same name?

When his political career is over, I’m sure Joe will be a shoo-in as prime candidate for the wacky weather guy gig on breakfast television.

But the YoungLib Twitterverse is agog!

To the Editor of Crikey, Ms Sophie Black,

I am shocked by the question you ask in today’s editorial “”the Australian public loathes its politicians. Why?””

How could such a responsible publication as Crikey even suggest the Oz voters dislike their politicians? These hard-working, dignified, wise, original-thinking, mentally superior creatures who diligently toil to please their hapless electorates deserve our boundless thanks, rather than the opprobrium you suggest.

Not for them the mendacity which occurs in other countries’ politicians. They do not seek to condemn their opponents; rather with gentle wisdom do they seek to inform those who disagree with their point of view. I cannot tell you how proud I am to listen to ‘Question Time’, be it the House of Representatives or the Senate, to see and hear, what has to be the most outstanding group of politicians on this planet.

BTW: How could anyone not find Joe Hockey to be a sexy, if slightly avuncular, figure? As if he would descend to lying via Twitter! Another BTW: Could you rein in your scribes a little, please?