A politically costly and lengthy negotiation

The time taken negotiating the details of the so-called deal with Malaysia on the five for one swap of asylum seekers is surely doing further great damage to the standing of Prime Minister Julia Gillard.

A politically costly and lengthy negotiation. The time taken negotiating the details of the so-called deal with Malaysia on the five for one swap of asylum seekers is surely doing further great damage to the standing of Prime Minister Julia Gillard.

And as for the apparently disappeared Manus Island proposal — that is just farcical and shows just how poorly Australia’s relations with Papua New Guinea are being handled.

Politicians working without pay. Strange things are happening in California. Jerry Brown, the state’s recently elected Governor, has kept an election promise to veto a budget passed by the state legislature that was not balanced.

The editorial cartoonist for the Los Angeles Times accurately sums up the reaction: 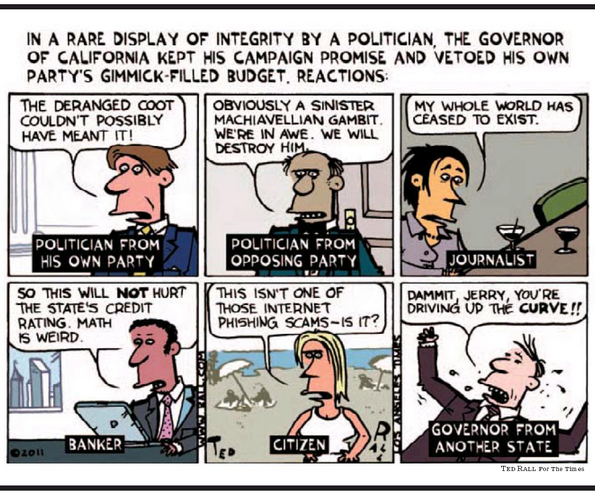 And as if that was not enough, the official in charge of overseeing government expenditure — the State Controller, John Chiang — has moved to stop paying the legislators.

Those cartoonists again! Without wishing to give First Dog airs and graces those people who draw about current events can sum up a politician’s character rather better than those who write about them. That’s just a little teaser. You will find the complete strip here.

And to complete your chuckle move on to a website inspired by the image: On the subject of eating. Having turned the subject to fast food I hope you will appreciate my neat segue into US legislative efforts to have restaurants that are part of a chain of 20 or more to  post details of the calories contained in their offerings. The LA Times reports how restaurant chains are Chains are scrambling to rework consumer favorites so they have fewer calories, and they are redesigning menus so that high-calorie items are balanced out by more-healthful options.

I am sure it will not be long before Australian health departments insist on similar regulations.