The major economic reforms no one voted for

The Australian economy is facing massive restructuring without our politicians lifting a finger, thanks to a manufacturing industry that's in its longest period of decline since the 1990s recession.

Australian manufacturing is now in its longest period of decline since 1990s recession, and there’s no evidence the decline is about to end.

Until early 2009, despite declining as an overall employer, Australian manufacturing had maintained a base level of jobs; there were peaks and troughs, but the sector had not undergone the sort of huge drop seen in the early 1990s as the recession struck and tariff reform got under way. The early 1990s reversed the strong growth of the late 1980s, and manufacturing as an overall employer fell, but the sector maintained a level of about 1.1 million jobs thereafter. 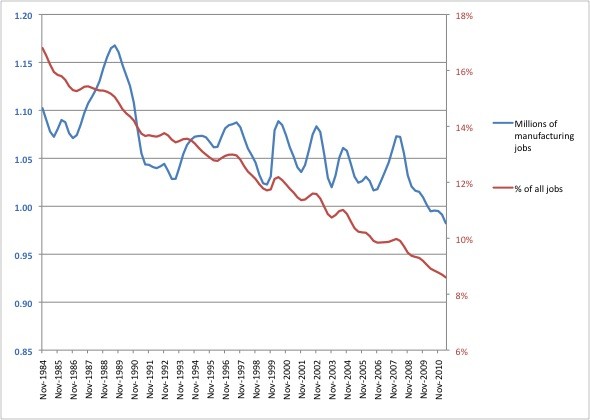 From early 2009, the sector went into territory it had never been in before in modern times, plunging below 1m jobs and well below 10% of the workforce.

Like the fall in manufacturing jobs in the early 1990s, this is economic reform at work. That’s partly because a high exchange rate is the consequence of floating the currency in the 1980s (and the automotive tariff reduction process is still ongoing, with tariffs falling to 5% in 2010 and scheduled to be eliminated in 2015). But the key reform driving the collapse in manufacturing isn’t one determined by Australian politicians, but by Chinese politicians; the China-driven resources boom that is hammering our manufacturing sector is a giant example of offshoring our economic policy.

Unlike the reforms of the late 1980s and early 1990s, however, this time there are other jobs to go to for manufacturing sector employees; indeed, the bigger problem in some areas is too few workers, not too few jobs — the sort of outcome that would have been the cause for wild celebration in the 1990s.

With such a rapid and persistent decline in manufacturing, even the wilder forecasts of the likes of Bluescope Steel about the impact of a carbon price are likely to be a blip compared to the longer-term reform started by Deng Xiaoping and continued by his successors.

So the oft-made comparison between a carbon price and the GST is probably irrelevant; neither really stack up in terms of impact, not to tariff reforms or the floating of the dollar, and not to China.

While manufacturing is the industry most visibly hit hard by the higher dollar, the currency has combined with another long-term reform our politicians had little to do with, the internet, to put growing pressure on retailers and supply chains. Online retailing is now exposing the significant mark-ups enjoyed until now by Australian retailers; the Australia Institute recently produced data on a range of goods showing an average mark-up by Australian retailers of 65% — well above consumer expectations — and in some case ranging up to 140%. The availability of the same goods overseas for often a half or a third of the price before shipping is already being blamed by retailers for sluggish growth, but as online retailing grows it will put more and more pressure on retailers’ mark-ups and, eventually, force retailers to in turn pressure suppliers and distribution networks to reduce prices.

We may not reach the stage of one world price for goods, as Ross Gittins has considered — you only need to open iTunes on the nearest computer to see that retailers and suppliers will try any scam to rip Australians off. But in Australia, where retailers, manufacturers and wholesalers have long profited from our isolation from world markets and consumers’ willingness to pay higher prices — usually because we didn’t know any better — the consequences of the shift to online retailing will ripple through the economy for decades, squeezing out inefficiency and anti-competitive practices in a way competition law will never be able to.

And all from a technology our politicians have, until the Rudd government committed to the NBN, tried in equal amounts to stymie as well as to encourage.

Meanwhile, another economic change is slowly unfolding, one with limited impacts now but major impacts in decades to come. Having linked economic growth to carbon emissions, we’re heating up the planet and changing the climate and Australia is particularly exposed to its impacts. They’re harder to pick from the data now than, say, the extended slide in manufacturing jobs.

But there’ll be few benefits from climate change, unlike the resources boom or online retailing. Australia isn’t northern Siberia, which along with the release of millions of tonnes of greenhouse gases will increase agricultural productivity in a warmer climate. Tourism and agriculture are already feeling the impacts of more extreme weather, and jobs therefore have already been lost to climate change. The toll in jobs and foregone economic growth from climate change will grow steadily, regardless of what Australia does with its own carbon pricing scheme; our only hope is concerted international action to confine the temperature rise to levels that will only cause limited damage.

All of these examples are to make a point about context in current political debate. We attribute our politicians with far more power than they actually have, and carefully analyse their debates over reform like they encompass the universe of policy options. This is partly a mentality based on the relatively stable world before the end of the 20th century — which much of the world’s population locked in a government-controlled economic straitjacket, and few of us with networks beyond geography, and no one outside a handful of scientists concerned about something called “the greenhouse effect”.

Now stability and the status quo isn’t an option. There’s a false debate about whether or not we have economic reform or restructure our economy. It’s happening regardless; the debate is only whether we choose to exercise control over reform and restructuring or simply sit back and let it happen.

For a lot of politicians, simply sitting back and letting things happen is the lower-pain option. Reacting — inevitably with expressions of concern and offers of assistance for the losers from change — is the lower-risk play than being proactive, which requires more policy nous and risks attack from the media and potential losers.

Still, that’s one way to run a country.

How the deficit was blown: the Coalition’s $100 billion bill

“Having linked economic growth to carbon emissions, we’re heating up the planet and changing the climate and Australia is particularly exposed to its impacts…

Tourism and agriculture are already feeling the impacts of more extreme weather, and jobs therefore have already been lost to climate change.”

Keane has been eating too much Flannery.

Regardless of the merits of the AGW hypothesis, regional impacts are little more than guesswork. That didn’t stop Flannery making a series of specific predictions in recent years- that Brisbane’s dams would never fill again, Adlaid would run out of water etc etc. Victoria is stuck with a huge desal plant (known as a Flannery) which may never be used, a plant which will suck up fossil fuel power. Some estimates put the 20 year cost at $24 billion. Then there’s the $1bn north-south pipe, now mothballed. And billions wasted on useless wind turbines. And billions given to domestic solar parasites.

The same stricture applies to “more extreme weather”. This is still speculation. No evidence is ever given by climate millenarians like Keane to prove the bald assertions that tourism and agriculture have already been damaged by “climate change”.

The caterwauling of climate wolves has put most people off climate millenarianism: premature, hysterical, incompetent, self-defeating, class-biased policies tend to do that. It’s called the Flannery Syndrome.

Note also Keane’s casual dismissal of the economic impacts of a carbon tax: of course manufacturing is heading to China (such insight)- but adding an ever-expanding impost will speed up deindustrialisation. Keane should run a public forum in Whyalla.

The people of Australian may not have voted for this economic reform but we were cajoled into it through the economic and industrial reforms that started in the late 1970s, by our politicians on both sides of politics. Our politicians accepted economic rationalism, globalisation of trade and the internationalisation of finance for us, as god given truths. There were citizens who protested, but they were portrayed as mad outsiders who didn’t understand economics. Did anyone think that there would be no consequences to the reforms adopted? Of course it is cheaper to make things in China or Taiwan or South East Asia. Labor costs for one are minimal and the standard of living low. The question is what do we do now? No-one seems to be thinking that any of the reforms introduced should be reversed. We seem to be sliding to an inevitable consequence that in a few years time there will virtually no manufacturing in this country. If we need more workers, we need to increase the immigration rate and stop persecuting refugees.

“Still, that’s one way to run a country.”

Since when did we all become a bunch of scared wingers?

How did it get this way?

“We attribute our politicians with far more power than they actually have”. True that. Politicians and most commentators are quite happy to promote the fiction that they do have such levels of power. We as voters are complicit in this by going along with the ruse. That being said, domestic policy as you pointed out with respect to tariff reduction and currency reforms, does have its place and this is where our politicians make a difference. Let us allow them a certain level of praise and blame, but no more.

I have been slightly amused by those who are predicting doom and gloom from a carbon price. “The price of electricity will rise!” they say. yes… it might a bit. But come on: privatisation and the GST have been responsible for much bigger jumps in power costs than the carbon tax will bring about! And did the same people complain about those changes?

Privatisation is doing maintance on power lines at the moment. And the prices are going up again! They just keep going up. They have to: shareholders need to be kept happy so profits must keep happening. Before Privatisation, govts paid for maintance of the system. Hey: before privatisation of the utilities, govt paid for the actual creation of the infrastructure… wonderful assests that later govts sold to a small minority of wealthy people…. and now the rest of us pay higher and higher prices each year, to keep their shareholders happy.

I feel ripped off. There are big forces at work that have caused much more pain to us “working families” than the carbon tax can ever cause. But no one has been talking about it.

This article is a breath of fresh air. Bring on the debate….