Some words of wisdom from a retiring President

At question time in the House of Representatives yesterday there was something of a novelty.

Some words of wisdom from a retiring President. At question time in the House of Representatives yesterday there was something of a novelty. A member actually asked a question that was not simply a debating point.

Green Adam Bandt wanted to know whether the Federal Government’s approach to the equal pay case for women currently before the Fair Work Australia tribunal might result in the Commonwealth having to pay a much higher amount, up to $2.5 billion over four years, than the union was seeking in its original claim.

What was not novel was the failure of Prime Minister Julia Gillard to actually answer the suggestion of the extra cost but she did give a non-argumentative update on the progress of “a consultative forum” between the government and the Australian Services Union representing the workers.

“It met on 6 June,” said the Prime Minister, “and we will continue to work through that group, and of course under the auspices of the industrial umpire, Fair Work Australia, to ensure that we see a proper decision-making process, we see wage justice for the working women involved and we also see phase-in arrangements which mean that the government can properly manage its budget and support the services that these workers work in.”

So besotted has the Parliamentary Press Gallery become with reporting from Question Time like judges at a prize fight that this question and answer did not make the nightly news. Instead we had another load of commentary on verbal jabs from the left of the Speaker’s Chair and  the upper cut responses of Dorothy Dix MPs on the right.

Which brings me another largely unreported part of yesterday’s parliamentary proceedings — the valedictory address of the retiring Deputy President and Chair of Committees  Senator Hon. Alan Baird Ferguson.

It was a strong an indictment of the way Question Time in Parliament has degenerated into near farce as could be expected of a former Senate President:

But I do want to reflect after 19 years on the Senate and what might be done to make this place more effective. Firstly, if it were up to me, I would abolish question time as it is currently structured. It is a total waste of time and, dare I say it, not much better in the other place, if not worse. We have in the Australian parliament the worst question time of any parliament throughout the world that uses the Westminster system.

I recently went to hear Prime Minister David Cameron answering questions in Prime Minister’s question time in the House of Commons. He answered 25 questions in half an hour, and answered every question. In Canada ministers get 35 seconds. In New Zealand they have up to 61 questions in the day, and each one is answered. There is one difference, and I have talked this over with Senator Faulkner on occasion at the procedure committee: every question is a question on notice, followed by supplementaries. I think the only way that we can ever get some order into this place or into question time is if questions are placed on notice and anybody in the chamber is allowed to ask a supplementary question. It means that there is no such thing as a dorothy dixer, a chance for a minister to then explain at length an answer to that question, because someone on this side of the chamber can add a supplementary and make it a more interesting debate.

I think there has never been a greater waste of time in the Public Service and in ministers’ offices than question time as it is currently structured. Ministers, staff and departmental officials spend many, many hours—I do not know just how long, because I have never been in there— preparing for answers to questions in the Senate and in the House of Representatives—questions that may never be asked, because they are not on the Notice Paper and nobody knows exactly what the topic of the question is going to be on the day or whether a certain minister is going to be questioned.

So can I say that I think that in its current form question time in both chambers does us a disservice. Name me one person in the community who is not frustrated by watching question time and seeing questions asked that are never answered. It is a generally known standard: the opposition ask questions they hope the government cannot answer, and the government ask questions where they have already prepared the answer. I have never seen a more farcical waste of time in my life, and I think it is something that ought to be changed as soon as is practically possible, but it will take goodwill on both sides because both parties have been guilty of encouraging and maintaining the current system.

We’ve seen the width now feel the depth. A significant part of the evidence fueling the concern about global warming has been provided by the satellite images that have allowed the measurement of the extent of Arctic ice cover.

Since then the daily measurement shows a decline in the ice level below that recorded in 2007. 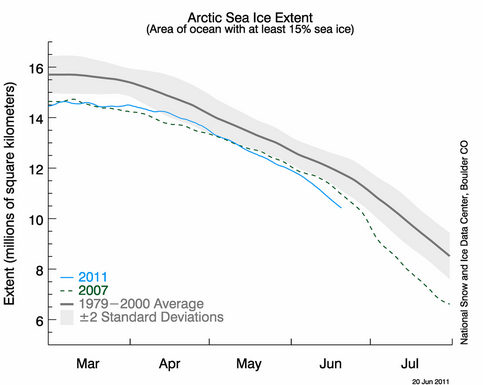 Knowledge of the area covered by sea ice is one thing but to measure the actual extent of any decline requires knowledge of the depth as well as the width and until this year satellites could not provide that information.

Now they can thanks to Europe’s new CryoSat spacecraft. It carries a high resolution synthetic aperture radar that sends down pulses of microwave energy that bounce off both the top of the Arctic sea-ice and the water in the cracks, or leads, which separate the floes.

By measuring the difference in height between these two surfaces, reports the BBC, the CryoSat team is able, using a relatively simple calculation, to work out the overall volume of the marine ice cover in the far north. Some better news on the inflation front? Perhaps the inflation outlook is n0t as dire as I, and many others, thought at the time of the release of the March quarter inflation figures. Since then an important component of what looked like causing inflation to rise has eased considerably. Heaven forfend! NASA rearranges the stars — and the traits of our leaders

Re the suggested reform to question time. Hear hear. Maybe we should have a plebiscite on this?

Re The Arctic. There was an interview on Radio National Breakfast this morning with a reporter in Greenland. I was astonished to learn that the temperature in northern Greenland was 30deg Celsius! The previous record high temp for Greenland was said to be 25 Celsius.

Listen at 2:50 though the whole interview is interesting.

Not much chance for ice, eh?

David
Thank you for the link. I listened to my local ABC this morning so I had missed it.

Being somewhat sceptical of the 30 degree claim I’ve tried to find some corroboration, alas, without success.

Greenland conditions for a number of stations can be found here:
((www.wunderground.com/global/GL.html))

I have not been able to discover the highest maximum record for Greenland. The best I’ve come up with is an unauthoritative advice for Nuuk.
((answers.yahoo.com/question/index?qid=20090418163419AAYyQ6m))