Gina Rinehart hates the label "Australia’s richest person". So how will she and the rest of the country react when (not if) she ranks as the "world’s richest", as can be forecast using the latest research? asks Tim Treadgold.

Gina Rinehart hates the label “Australia’s richest person”. So how will she and the rest of the country react when (not if) she ranks as the “world’s richest”, as can be forecast using the latest research?

Citigroup Global Markets, a division of the big US banking group Citibank, provided a glimpse into Rinehart’s future in a major report into worldwide resource projects called Generation Next. The 60-page document looks at 400 mining projects around the world classified as “greenfields”, meaning they are not currently in production but are moving through the design and approvals process.

As might be expected. the world’s biggest mining companies, including BHP Billiton, Rio Tinto, Xstrata and Anglo American are top of the list. But in fifth spot, ahead of Brazil’s resources leader Vale, is Hancock Prospecting, the company Rinehart inherited from her father, the late Lang Hancock.

To say this is an amazing ranking is putting it mildly. Putting a single person (because Rinehart owns all of Hancock Prospecting) on a list of global resource giants means that she will, in the future, own projects of a similar size to the biggest miners.

Two factors need to be considered in this, the start of re-rating Rinehart as the world’s richest persons. They are:

The answer to the first question is that all projects were reduced to a common factor, a copper equivalent. In other words, they have been valued as if they were all producing copper, the leading base metal with uses which span a number of industries, from construction to electronics.

The answer to the second question is that Rinehart owns all of hers, whereas the other companies on the list share their wealth with thousands of shareholders.

The strength of Rinehart’s position is shown in the list of the top 10 projects, headed by Rio Tinto’s Simandou iron ore mine in the west African country of Guinea. It will start production in 2013, building to an annual output of 70 million tonnes of iron ore which is calculated by Citigroup to be the equivalent of 875,000 tonnes of copper a year.

Rinehart has three projects in the top 10, the same number as Rio Tinto (BHP Billiton has none). They are:

Those three projects are expected to attract joint venture partners in the same way Rinehart brought Rio Tinto in as a partner in her first mine, the Hope Downs iron ore project in WA. It was the start of production at Hope Downs, plus a perpetual royalty paid by Rio Tinto on most of its WA iron ore production, which pushed Rinehart to the top of the Australia and New Zealand rich list compiled by Forbes magazine, followed later this year by BRW, with both estimating her net work at $9-10 billion.

Important as the royalty might be, it is Hope Downs which is generating the bulk of Rinehart’s cash flow, as this snapshot illustrates. At its current annual 30 million tonnes of production, and an iron ore price of around $US175 a tonne ($A166 a tonne), Hope Downs generates annual revenue of around $5 billion. The cost of producing a tonne of iron ore in the Pilbara is around $A40, leaving a profit margin per tonne of around $A126, meaning Hope Downs is generating an annual profit of $3.78 billion — with half flowing to Rinehart, or around $1.9 billion.

Hope Downs is expanding to 45 million tonnes a year, which will lift Rinehart’s share to 22.5 million tonnes taking her annual profit to around $2.8 billion (before the Rio Tinto royalty).

If Rinehart was a company listed on the ASX, and valued using the same 11-times price-to-earnings ratio as her partner, Rio Tinto, she would be worth $30 billion, putting her in the top 10 of the Forbes rich list headed by Mexican telephone magnate, Carlos Slim, at $US74 billion, with Microsoft founder, Bill Gates, second at $US56 billion.

Rinehart, however, has three more mines on the way, and potentially more in the exploration phase.

If those best guesses prove to be correct, Rinehart is heading for a personal net worth valuation of more than $100 billion, using the Rio Tinto 11-times PE multiple.

It is, at this stage, a game of estimates, assumptions, forecasts and predictions. But the numbers are a guide as to how big Rinehart could become, raising a totally separate set of questions — especially how Australian governments deal with her.

*This article was originally published at Smart Company

With $20b in the bank, Gina could become the world’s richest 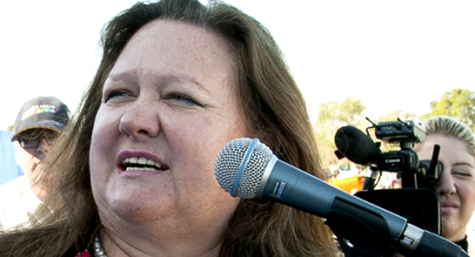 Staggering numbers, yet the mining industry was able to convince the ovine population and press that if the super profits tax came into force they would take their ball and bat and go elsewhere with their projects. And all of this for a plublicity campaign that from memory cost a mere $13M (or was it $20M?).
I happen to be a geologist, and know that they won’t be taking their ball and bat elsewhere. Australia is a magnificent cricket pitch.
Continental drift is a very slow process.

not if a moratorium on coal mining is enacted…
the inherent ones plans may be thwarted.

Could we not tax her income (and indeed all income in excess of say $500,000) a year at 75%? I have yet to hear any of the ultra rich say anything other than “I don’t do it for the money” and “Money is only a way of keeping score”.

well if i was GR the first thing i would be doing and with all due respect is to get a personal trainer… not much good being the richest person in the cemetry and it makes good business sense running a company as large as hers .

Correct Tim.
Now watch Fairfax change their tune on Gina any day now.
She has her sights on Fairfax and I don’t mean a bit of it – the whole f***ing lot!
Oh to be in the room when she marches Marr & Carlton out the door.
Watch this space.