A bad week for brand Gillard

This was always going to be a difficult week, and the majority of media coverage has started to focus not just on Julia Gillard’s future but the future of the entire brand.

As the 24th of June rolls around the badness has mounted daily for the P.M. Any thought that this would be either a triumphal first anniversary of a new era in politics or alternatively a barely remembered footnote in the stately progress of the ALP Government were killed off by the end of August last year. This was always going to be a difficult week, and the majority of media coverage has started to focus not just on Julia Gillard’s future but the future of the entire brand.

Kevin Rudd has of course not gone quietly into the night, and the public discussion of his current and future role, on top of continually worsening polls and the whole range of policy problems, not to mention State defeats from unexpected to crushing have of course all fed in to the 2011/12 financial year staking a fair claim to be the Labor Party’s Annus Horribilis. The Independents, particularly Wilkie and Oakeshott are now publicly trying to hold the whole thing together as the media claim some within the ALP are developing a wobble.

Nick Xenophon has tried to get as much out of his last days of relevance as possible on live exports, and Steve Fielding has left with a bang, thanks to his calling out a perhaps slightly poorly thought out plebiscite stunt from the Opposition, giving him a chance to go out the door seeming vaguely reasonable and his own man. Nevertheless he won’t be back on this list after next week.

On actual policy issues (remember them?) – the media reported that Joe Ludwig seems to be putting less onerous requirements on Indonesian abattoirs for resumption of the live cattle trade than either the welfare groups or the industry itself. 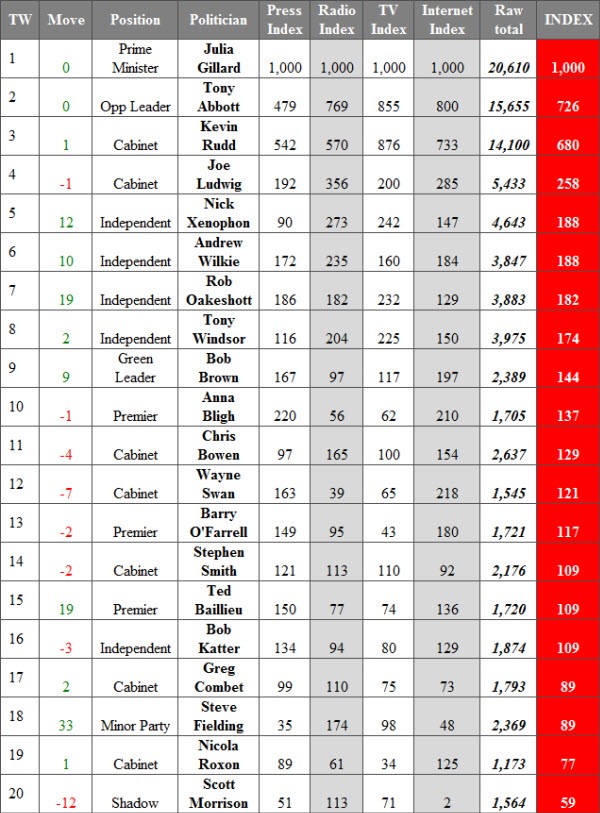 Julia Gillard continued to attract criticism from talkback callers about her government’s carbon tax, with the plebiscite hitting the right note with the choir, while the live export policy continues to get mixed opinions.

Thurston’s possible suspension from the Queensland team has added that extra bit of spice to media coverage to the deciding State of Origin. It’s all a plot, of course.